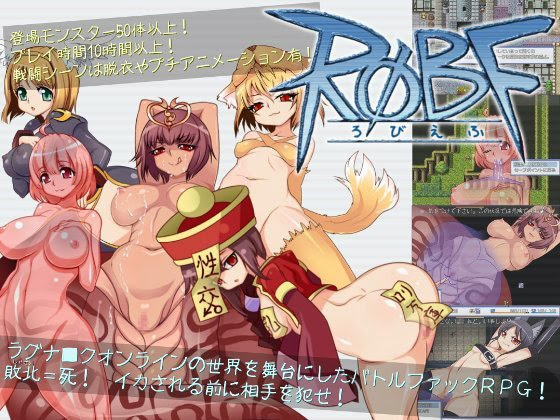 The sex battles are done well in ROBF.  The artwork is consistent and while it isn’t up to the high standards of games like Violated Hero they’ve added limited animations to represent the different attacks each monster girl uses.  It’s not particularly fancy, but it works well.  The Bad Ends vary according to which attack the girl defeats you with and are mostly repeats of the same animations from the battle drawn out for added sexiness.  It’s impressive how much even a limited bit of animation adds.  If you liked Erotical Night, but thought the monster girl designs were too bland, ROBF is a game you’ll want to check out.


ROBF is also one of the most proper-ist RPG’s I’ve played.  Levelling up means more than just increases to strength, defence and hit points.  There are skill trees, new attacks to be learned, tons of different items, quests, even a collectible card system that provides different stats boosts when equipped.  It’s complex.


Unfortunately, when you don’t read Japanese and are relying on iffy machine translation, that complexity can be become a drawback.  There were a lot of times when I wanted to move onto the next area but couldn’t because I hadn’t found the right item or spoken to the right townsperson.  It feels harsh to criticise the game for my linguistic failings, especially as it was never intended to be played outside Japan, but it is a valid point.  If you like sexy monster girls, want more of a game with your smut and can read Japanese, you’re going to think ROBF is amazing.  If only the first two apply, then expect a lot of frustration and scanning of forum threads while you try to work out how the hell you’re supposed to enter that pyramid in the desert town (or even unlock the first sewer dungeon).


Making the player jump through a few hoops to unlock new sexiness isn’t that bad of a thing.  While I liked the openness of games like Violated Quest and Violated Fantasy, it is easy to blast through all the content a little too quickly.  ROBF gives more value by rationing out the hawtness.  This can fall down, though, if the player enters a new area and finds none of the new monsters are their particular cup of tea.  For me the main evil castle was a little disappointing as the monster girls were mostly bland.  I was looking forward to see how the game represented a classic succubus and I didn’t find any.