While wading through the sticky swamps of 4chan I found a link to this: 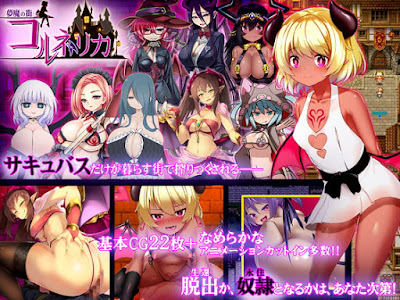 This was a game I ended up skipping.  If you're wondering why I don't cover Japanese succubus/monster girl H-games as much as I used to, the main reason is because successive Windows updates have completely borked most of the hooking and machine translation tools.  Unless I get around to learning to read Japanese, I can't really play these.  I did try doing a walkthrough of Monmusu Conquered World blind, but the results were a bit shit to be honest.

Cornelica looked interesting, but Dieselmine did their typical Dieselmine thing of having the random encounters have the nice pseudo-animated (basic Photoshop puppeting at a guess) scenes while the main, named characters all had static-image Bad End scenes.  They did get this right with the following game, Monster Girl Labyrinth, which did have some delicious Bad End scenes, including the lovely boob monster girl who inspired the current story I'm working on (No, I haven't forgotten about it).

I did like the setting.  A town of succubi seems a fun location to work with and it's nice to see someone make an anime using the location and characters.  The big-boobed innkeeper succubus, the big-boobed temple succubus and the cat-eared shopkeeper succubus all get to fuck the hapless protagonist, much to the disgust of his succubus girlfriend.

Maybe I'll try the game out if I can ever get hooking and translation to work again (or get a new laptop with a non-shit version of Windows).

(As an aside, yes I know I went AWOL for a couple of weeks again.  This is what happens when you effectively live two lives and the other one has to take precedence for a short while.  Rather than post yet another not-update post I thought I'd post links to some sexy succubus snu-snu instead.)
Posted by M.E. Hydra at 20:00