Unfortunately, this time I’ll be having to make do without any machine translation as Windows 10 is a bit of a fussy bitch when it comes to letting text hookers work.  As I can’t read any Japanese apart from the memetastic and inevitable “Hora Hora”s, there may be a lot more blundering than usual.

(This also explains why I’m doing the Text Play for Monmusu Conquered World and not the higher profile Monmusu Quest: Paradox part 2.  That and I’d actually like to finish the novel I’m working on before the end of the year.)

Right, let’s fire her up.  Tissues and lotion at the ready (actually, can you forget I just wrote that). 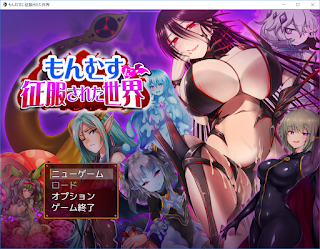 There is a difficulty choice.  I’m going to take the wimpy Normal option here on the principle that any RPG trickiness will quickly prove insurmountable thanks to the language barrier.  The bulk of the game is RPG battles versus the various boss monster girls.  There is a game mechanic, talked about later, designed to make sure none of them end up being a roadblock.  Also, I’ve not tried it out to confirm it, but I suspect the higher difficulty level removes or tones down this mechanic.

After that there is the choice to see the intro or jump right into the game.  Skipping the intro gives a crazy movie-style trailer and summary of the intro, but we want to see the intro... I guess... not that I’ll be able to understand any of it.  There might be boobs though.

(Which, fortunately is explained in English on the product page of DLSite.)

I’m guessing we’re in some kind of generic mid-fantasy setting.  Humans don’t get art privileges in these games, so it’s silhouettes only for their sprites.  Everyone is minding their own business until monster girls descend and start snu-snuing everyone to death.


Ah, I recognise these.  Dieselmine is re-using some of their old art assets.  The succubus and squid girl are from Violated Hero 5.  The harpy is from VH2, I think.  Randomly they then show a bit of artwork that was originally part of Milfy’s Bad End scene in VH2.

As an aside, Violated Hero 2 was translated into English by Dargoth, and is well worth a look.  You can find the translation here.

The hero - who we’ll refer to as Luka-clone from this point on, because some traditions must be maintained – is running away when a harpy ambushes him.  Either she knocks him off a cliff or tries to fly off with him and drops him.  The end result is the same.  Luka-clone falls from a great height and cracks his skull open.

Hmm, this story appears to be on the short side.

Oh wait, it’s not over.  Despite smearing his brains all over the rocks, Luka-clone wakes up in possession of a fancy magical sword.


And thus the greatest solution to Bad Ends being... well... the end.  We have been gifted with a magic sword that resurrects us after death.  That means all the enjoyment of hawt succubus sexy times without that awkward post coital death from exhaustion, fluid loss or having our soul sucked out.  Marvellous!  Now that is a fine way to integrate game play with story.

The harpy comes back.  This is where Luka-clone gets to show off the hero power that will save the world.

Hmm, those talons look way too pointy for me being comfortable with them being anywhere near my dick.

I suspect I might have used that joke last time as well.

Not really sure what happened, but give the premise and the amount of white stuff splattering the screen I suspect poor Luka-clone expired from terminal fluid loss.

Which isn’t permanent, because we have our fancy-dancy magic sword to resurrect us afterwards.  No more save scumming and the senseless deaths of many alternate timeline Luka-clones for us to get our fix of hot succubus action.

The harpy comes back and the second plot point mechanic reveals itself.  The harpy isn’t able to dodge everything at will this time and after Luka-clone clips her a few times she decides enough is enough and takes to the skies.

Not only does the sword resurrect our hero, but he comes back stronger each time.

So we’re basically Doomsday, and he was hard enough to kill Superman once.

And with that, I’ll end part one.  I’m planning to put out a new part every couple of days, with each focusing on one of the boss monster girls.

I don’t have a Patreon, tip jar or anything like that, so if you enjoy this series, please check out my books on Amazon.  They’re basically the same thing, but in English (and without pretty pictures... :’( )