So after comprehensively stomping all over someone’s puppy I should try and say something positive about the whole 3D Monster Girl Quest (probable) trainwreck. 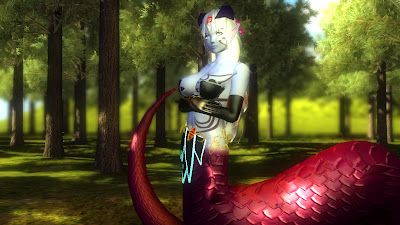 But again there’s the time and expectation issue.  How long did it take to make?  What are the range of facial expressions?  What movement animation does she have?  Is she just going to sit there and wag her tail a little, because if that’s the case what is the point of using 3D over Kenkou Cross’s already expressive artwork?

And remember, there are another 150 monster girls to go after this...

A good example of using 3D graphics to good effect is Pretty Warrior May Cry.  It’s an eroge Dungeon Keeper.  Obviously they didn’t have the budget or team to make full eroge Dungeon Keeper that wouldn’t suck to play, so they abstracted the gameplay to what they could do and stuffed the eroge elements into 3D H-scenes showing exactly how their minions slow down the marauding heroes.  (The lilith animation is available in the trial). 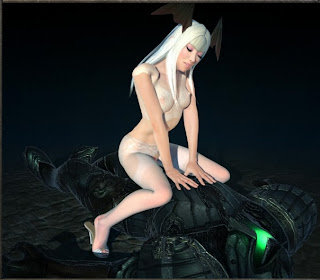 The original MGQ does the same thing.  It’s a RPG with exploration and branching paths replaced with a linear Visual Novel.  This frees them up to concentrate on other things like the story and puzzle(ish) battles (and of course the sexy bad ends).  Violated Hero constrains the player to a Dungeon Master-style Grid.  Desire Dungeon does the same but makes the map a straight line and throws in a chest/loot mechanic.  All the RPG-Maker clones already have most of the RPG mechanics provided by the game maker they’re using.

Hero, Monster Girl Quest 3D, has no constraints.  It’s trying to build everything from the ground up.  In the original MGQ the Succubus Village is abstracted away to a few background pics.  Hero built the town in 3D.  Cool.  But what are they going to do for the Plansect Village, the Harpy Town, the Slime Cave, the cities, the underwater segments, the Demon Lord Castle...?  We’re in George Broussard and Duke Nukem Forever territory here.

Where 3D could really shine is if combined with the combat and Bad Ends.  A Monster Girl Quest with the sex battles/Bad Ends depicted in a similar way to the animations in Pretty Warrior May Cry could work really well.  Aside from the obvious being-ridden-by-a-succubus scenes, various different struggle scenes as Luka is dragged deeper into a slime girl, plant girl or similar enemy would add a lot more to the game than the simple bound/unbound pictures that are used now.  I think a game like this would pick up a lot of interest and have no problems getting indie funding (although it might mean going through offbeatr and smaller dlsites).  It's the difference between going for a niche audience that will definitely come, or jumping for a mainstream audience and falling flat on your face when they don't show.

Again the marketing adage applies: Don't bother trying to appease people that aren't interested in your product anyway.
Posted by M.E. Hydra at 19:08