The epic Monster Girl Quest has concluded, but if you’re suffering from withdrawal symptoms a spin-off came out over the holiday season.  It’s a follow-up to Monmusu Delicious -Breakfast- (which I talked about here), this time called Monmusu Delicious -Lunch-.  Presumably there will be a Monmusu Delicious -Dinner/Dessert- at some point using characters from MGQ’s third chapter (where Black Alice probably vores everything). 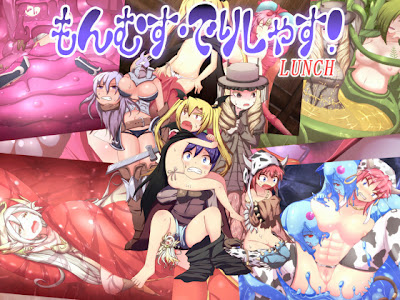 Monmusu Delicious -Lunch- isn’t strictly speaking a hentai game.  It’s a collection of alternate Bad End scenarios featuring monster girls from the second chapter of MGQ.  As the title suggests, the emphasis is on vore and most of the protagonists end up in someone’s belly.  Most of the time that’s MGQ’s protagonist, Luka, although other characters are used such as Sylph, Camel’s Cecilia, the loli Vampire Girl, and ever odder choices such as the Slug Girl and Dullahan.  Pretty much every monster girl that had a vore Bad End in MGQ’s second chapter gets a scenario.  There are also vore scenarios for some of the non-vore monster girls such as Beelzebub and Lilith & Lilim.  Erubetie gets another opportunity to use her rather dubious de-aging power before slurping up a hapless Minotauress.  I expect it won’t be long before the paedoslime memes hit 4chan.

This is vore, so if you thought that aspect of MGQ was icky and played the game with the vore endings switched off, this isn’t going to be your cup of tea.  If you like vore and enjoyed Delicious Monmusu -Breakfast-, Delicious Monmusu -Lunch- is more of the same.  It's currently in Japanese, but if you're patient and keep an eye on Dargoth's site, there might be an English translation at some point in the future.

Last time round I pointed out they’d missed off the Sea Anemone Girl and wrote a little sex/vore tale to make up for it (a creature not unlike the Jellyfish girl also found its way into A Succubus for Freedom as well).  It was fun and I liked how the story turned out so I might do it again (and writing a simple ‘dude stumbles on monster girl – suck, fuck, slurp!’ story will be a good breather after the complex storylines of A Succubus for Remembrance).

Now which monster girl to have fun with.  Monmusu Delicious -Lunch- didn’t leave out any glaring omissions.  By my reckoning Alra Vore and two of the Canaan Sisters (the Venus Flytraps) didn’t get a scenario, but that section of the game is nicknamed the Forest of Nope! by fans for a reason.  The only other one, I think, was the Dragon Girl, but I always thought she was a little too much licky-licky and not enough fucky-fucky.

Anyway, at the moment I think I’ll be wandering into the Forest of Nope! to see what sexy plant girls are around.  This isn’t set in stone yet, so if there was a girl from MGQ2 you were disappointed didn’t show up in Monmusu Delicious -Lunch- let me know in the comments.  It's the holiday season so I might pick them instead.
Posted by M.E. Hydra at 04:50