How not to make your print cover

As promised, here is the whole sorry saga of why it took so long to make the print version of Succubus Summoning 201 available.

First off I should go through the process I follow to make print versions of my books available for readers to buy.  My publisher, eXcessica, uses Amazon's CreateSpace to produce Print On Demand paperback versions of their books.  The files they need from me, the author, are a correctly formatted manuscript and a high resolution pdf of the coverflat.

The coverflat is the full cover of the book - back, spine, front - laid out flat.  In order to create this CreateSpace asks the author to fill in a bit of data on how big they want the finished paperback to be and how many pages the manuscript is.  The number of pages value is needed to determine the thickness of the spine.  Once CreateSpace has all the info it spits out a template that looks like this: 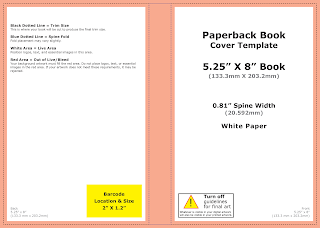 I'll go over what the dotted lines and other stuff means in a mo.  First there's the obvious dependency - CreateSpace can't give you this template until you know the total number of pages in your book, and you won't know this until you've finished and correctly formatted the manuscript.  This is a problem for people like me who have an unfortunate tendency to push our deadlines rather fine.

When I get caught in a time crunch, my usual approach is to focus on making sure the ebook version is ready in time and then try to get the print version done as soon after as possible (the manuscripts are formatted a little different - nothing major, but it does take a little fiddling around).

The ebook front cover is relatively straightforward.  What you see is what you get and the artist has control of where the boundaries occur.  For Succubus Summoning 201, that gives us this front cover: 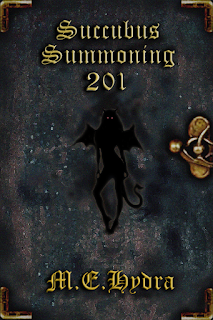 My art direction was to follow on the theme of Succubus Summoning 101 and make the cover look like one of those old leather-bound tomes with clasps and bits of metal around the edges.  Sort of like this: 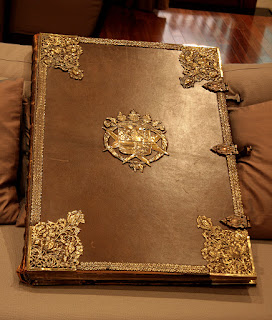 For the ebook cover this is relatively straightforward as the artist knows the exact margins and where the exact edge of the cover is.

For the print coverflat is becomes a little more complex.  If you look at the template above you'll see there are dotted lines and a salmon-pink border.  The dotted line indicates where the cover will be cut out, but this is not 100% precise, hence the salmon-pink border.  This represents the bleed area and everything in it is a sort of Schrödinger's artwork - it might get cut off and not appear on the final cover, but you have to have something there in case it doesn't.  So this something should look okay enough that you don't mind it being on the front cover, but also shouldn't be important enough that it has to be on the front cover.

For most book covers (and the case with all my short story collections) this isn't a problem.  The edge is background stuff that can be chopped off at any point.  Then we have the Succubus Summoning 201 cover and those little corner pieces...

Somewhere in the (sort of) commissioning process I managed to totally confuse my artist on what the bleed area was and what it meant.  Many mistakes were made, over and over...

I should also mention at this point that my cover artist is also my brother and he volunteers his time for nothing more than thanks and beer.  As he has a family and full-time job, he only has the spare time to work on things at his own pace.  This means that turnaround times are going to be, by necessity, slow and inconsistent.

The first mix-up was with the dimensions.  The correct dimensions for the coverflat should be 3468 x 2475, 600 ppi.  The coverflat template comes with a resolution of 300 ppi.  In between our respective art programs we managed to get stuck between the right resolution but four times the size, or the right size but the wrong resolution.

I found this out after sending a ridiculously huge file to Stacey, the assistant at eXcessica, that took some finangling to even send it through email before she realised it was way too big for CreateSpace.

We managed to get that sorted and then the bleed area problems hit.

The next submission was rejected by CreateSpace for having text too close to the edge.  This was where I managed to confuse my brother.  He misunderstood what I meant by having a bleed area around the edges and his first fix was to increase the size of canvas to add a bit around the edges.  This doesn't work as the cover is still going to be cut out at the same dotted lines.  The next attempt had the right-sized canvas and the blurb on the back moved away from the margins.  It also positioned the corner ornamentation right in the bleed area.  When I overlaid the template I saw straightaway that virtually all of the corner pieces would be cut off, and sent it back.

My proposed fix was to position the whole coverflat inside the salmon-pink border and then fill the edges with background cover.  I wanted to extend the pseudo-metal ornamentation to the edges, so I told my brother to widen them to fill out to the edges.

This didn't work either as Stacey came back to say the coverflat had been bounced again for having essential art bits within the bleed area.

I asked her if we could just overrule it as I didn't mind if some of it was cut-off.

Unfortunately this was something she didn't have any control over.  My guess is CreateSpace has some automated checks on the cover art.

So, back to the drawing board for the umpteenth time.  As my brother's time is limited, these back and forths took place over the course of a couple of months.  Rather than bother him again I repositioned an old version of the coverflat inside the safe area and filled the borders with a flat colour taken from the background to blend it in.  This left me with this: 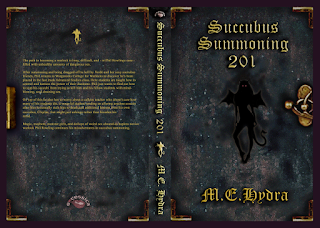 ...which was thankfully good enough to pass as well as turning out okay when displayed on the Amazon site: 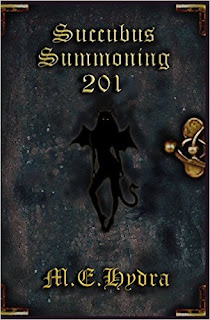 So there you have it - less of an excuse and more an acknowledgement of me and my brother being giant idiots.

Anyway, I hope you enjoyed this little peek behind the scenes of the publishing process.  Thankfully, there is a happy ending.  As I posted on Monday, the print version of Succubus Summoning 201 is now available to buy on either Amazon, or directly from CreateSpace.  Sorry for making you all wait so long!
Posted by M.E. Hydra at 17:31