Update on Next CYOA/Gamebook Scenario

It's not working out.  Looks like I'll have to move onto something else.

(Although I have done that far too many times with other projects over the last year...)

It's actually moving along quite nicely.  I've planned out the scenario and mapped all the routes through it, along with the various tests the player character needs to perform. 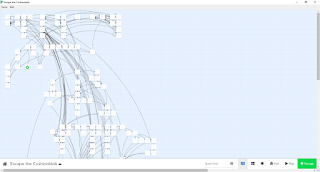 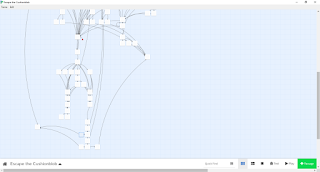 Because I couldn't fit everything on one screen.

I definitely feel like I'm in a "hot" productive phase, so I'm going to keep mining it for as long as it stays "hot".

As I said in the last post, the scenario is going to feature a lovely lady very similar to this one.

Some people asked for it, so I've included some options for non-lethal sex this time around.  She's not quite as predatory as the spider girl, but she will quite happily suck all your good stuff out if the mood takes her.  Escaping with the trophy/statuette should also be a little more of a challenge this time around.

But what we really care about are those Bad End scenes.  Assuming this one pans out the way I've designed it, there will be 4 "good" sex scenes, 5 Bad End scenes and a couple of Very Bad End scenes if you manage to annoy her too much.

I'm now working on writing all the raw text.  I'm estimating it will take about 1-2 weeks to write, type up and edit the scenes and then another week to correctly test and debug the scenario.  The raw text is critical.  Once I've got the big scenes (those sexy Bad Ends) written down, then I'll be confident I'll be able to see this through to completion.  This will be the point I crack open the Patreon and start panhandlin'.  The plan will be to release the finished file to patreons first, and then post the story to philome.la for everyone else a week later.

One question remaining is what to call it.  The H-space Bestiary names I gave monster girls were... variable in quality.

"Escape the Pink Cushionblob" doesn't quite have the right ring to it.

I could use "Escape the Slime Girl", but I have a rough idea of another scenario with a slightly gooier slime girl.

Post your thoughts below, as well as anything else you want to say on this.
Posted by M.E. Hydra at 17:27