Last up I threw an introduction together to set the scene.  An introduction on its own isn’t a full story and definitely isn’t interactive.  When I’m writing a short story I normally have an idea of what the ending and set pieces are and then keep writing until I hit an appropriate end point (usually the point when the lucky/unlucky protagonist has had all their juice squeezed out).

I haven’t tried it, but I suspect trying to write an interactive story in a big splurge isn’t the best idea when there are multiple branching points and endings.  Or maybe it is the way to go.  I’m new to these things after all.  What I’ll do instead is map out a rough structure and then fill in the text afterwards. 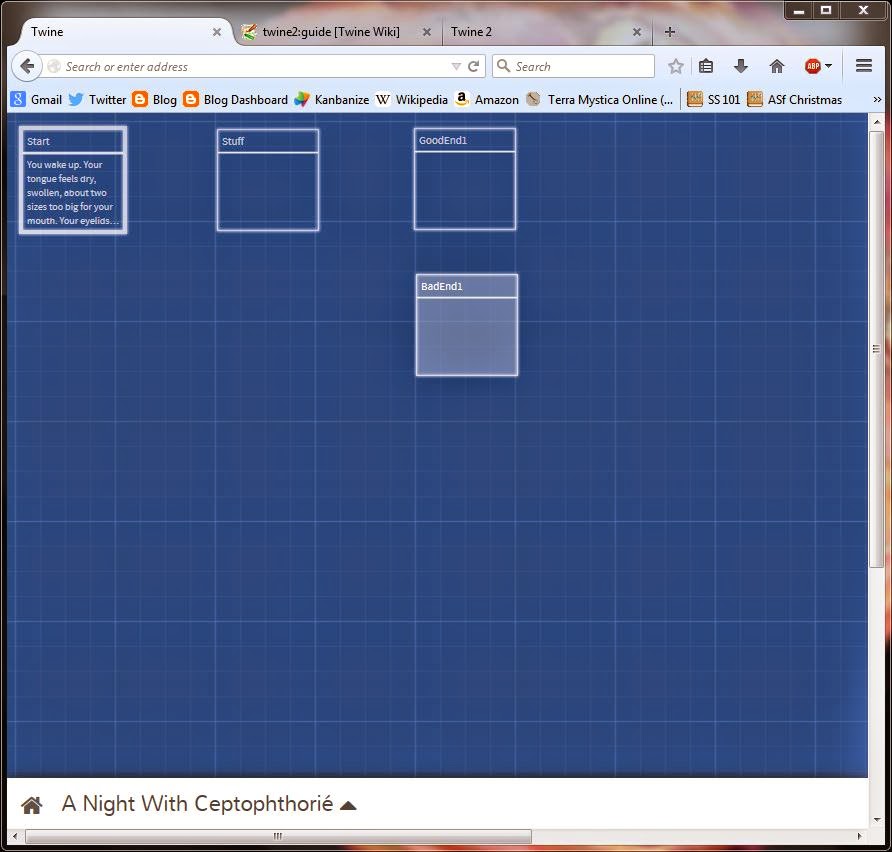 Obviously, it’s very basic, but it’s the essence of this type of game – choose naughty & fun stuff or be boring and try and ‘beat’ the game.

At the moment nothing is hooked up.  That’s done through the Twine syntax of


[[Text to display->Name of Passage to goto]] 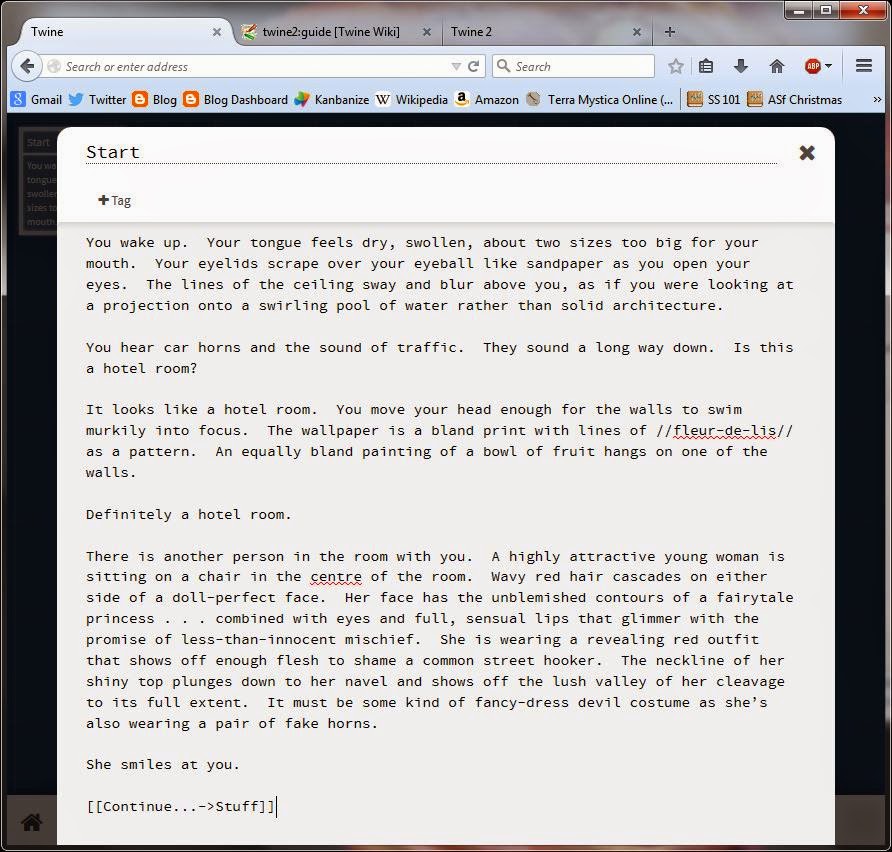 From the introductory passage we continue to Stuff.

Stuff gives us a simple choice of GoodEnd1 and BadEnd1.  I’ve numbered them because there will probably be multiples of one and probably both and it makes sense to put the numbers in now rather than trying to change the names later. 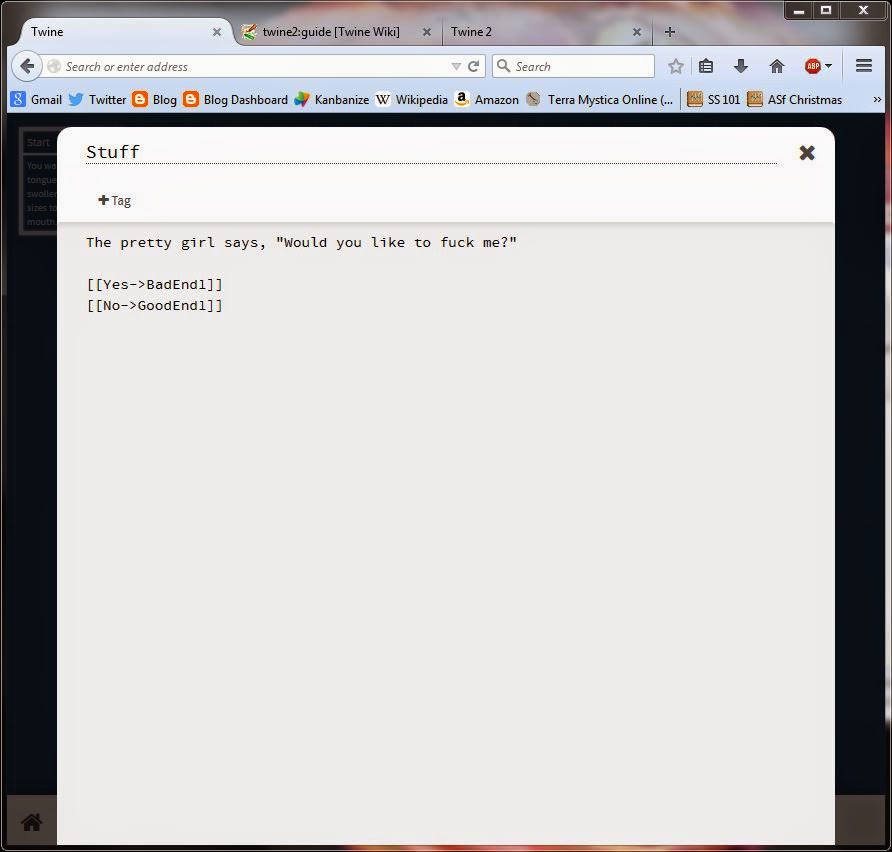 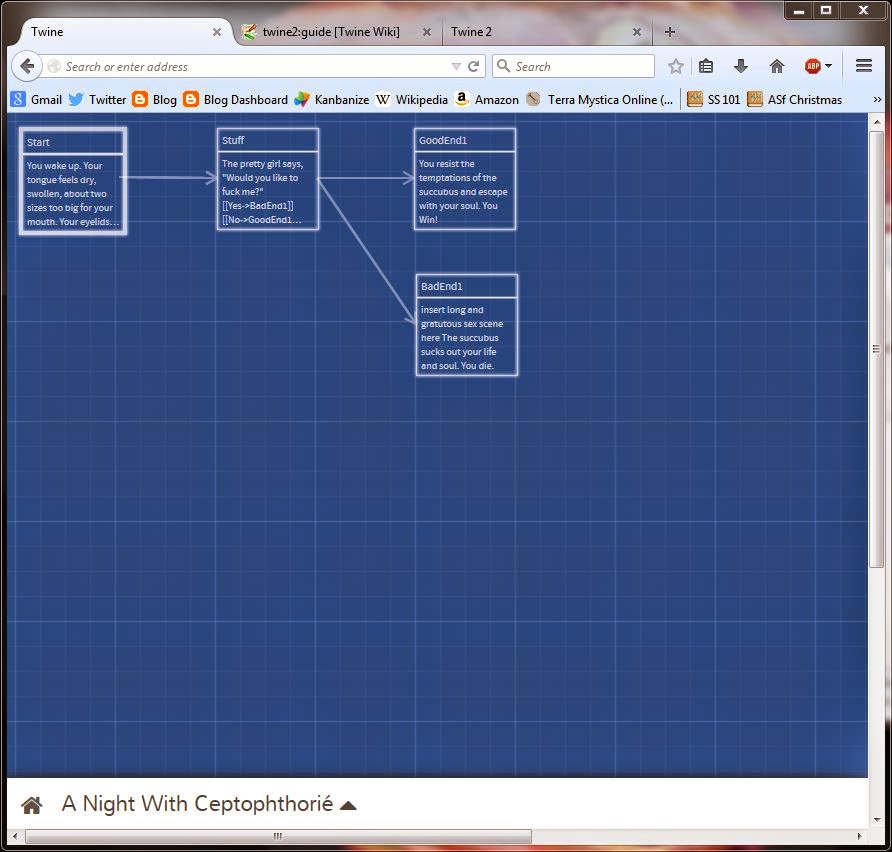 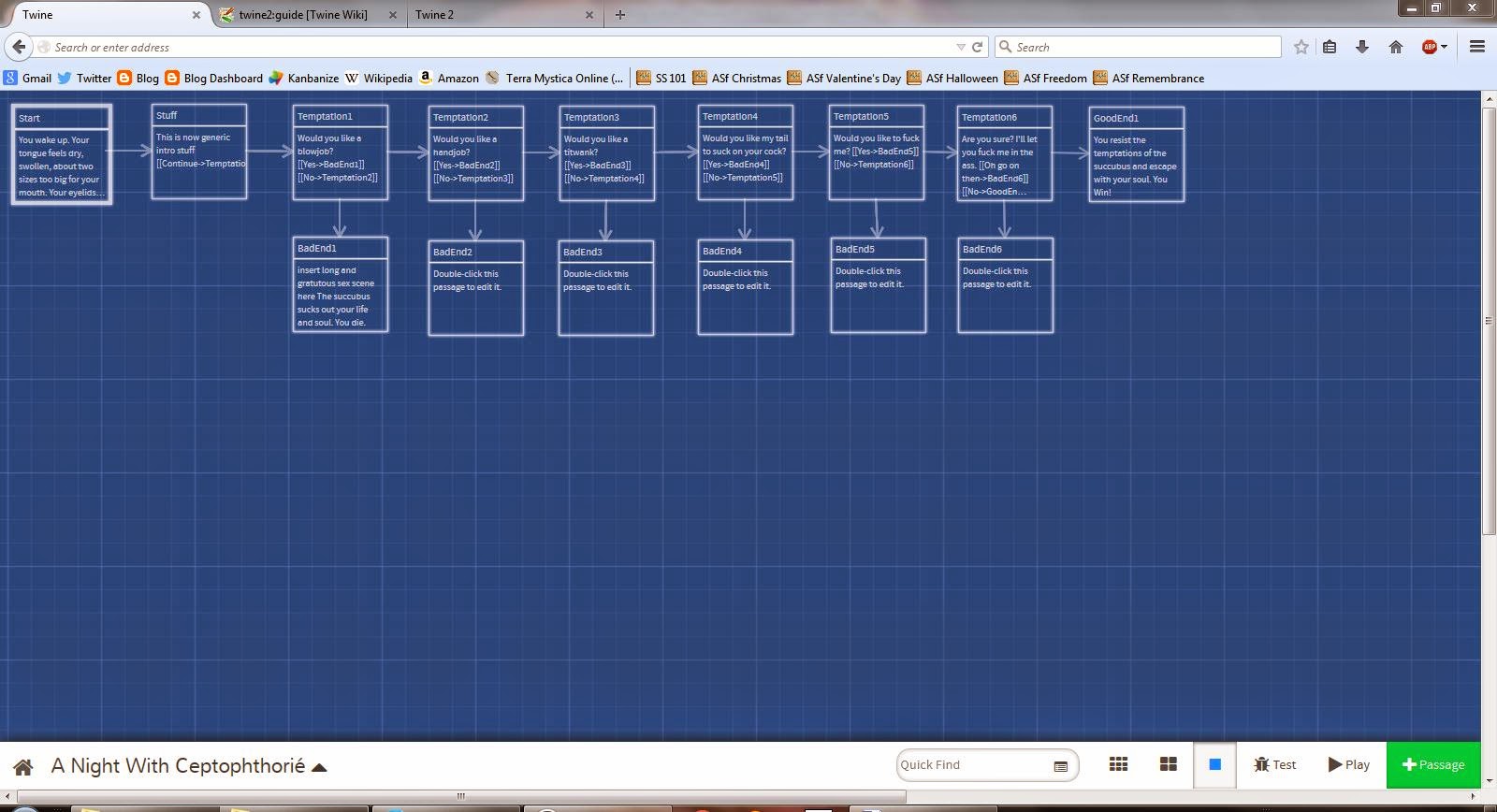 This will give me a skeleton of sorts.  One thing I will do is rename and reorganise the passages.  If I want to move things around (which I almost certainly will) TemptationTitWank is a much clearer target to link to than Temptation3.  I’ll also add some more sections to the introduction to give a clearer breakdown of what those passages are going to do.

Unfortunately Twine doesn’t appear to keep track of name changes to passages, but it does at least show passages with broken links as red boxes. 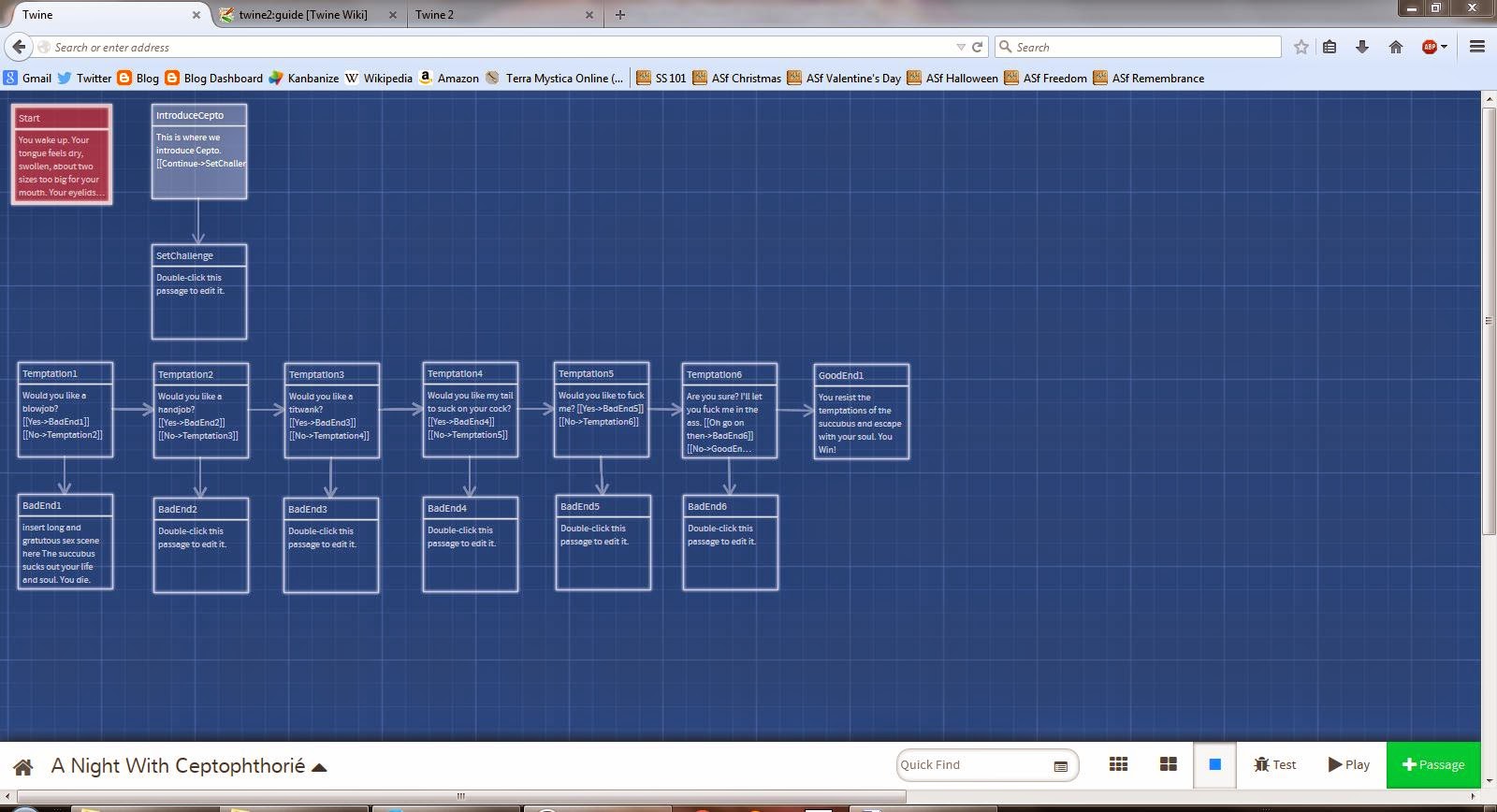 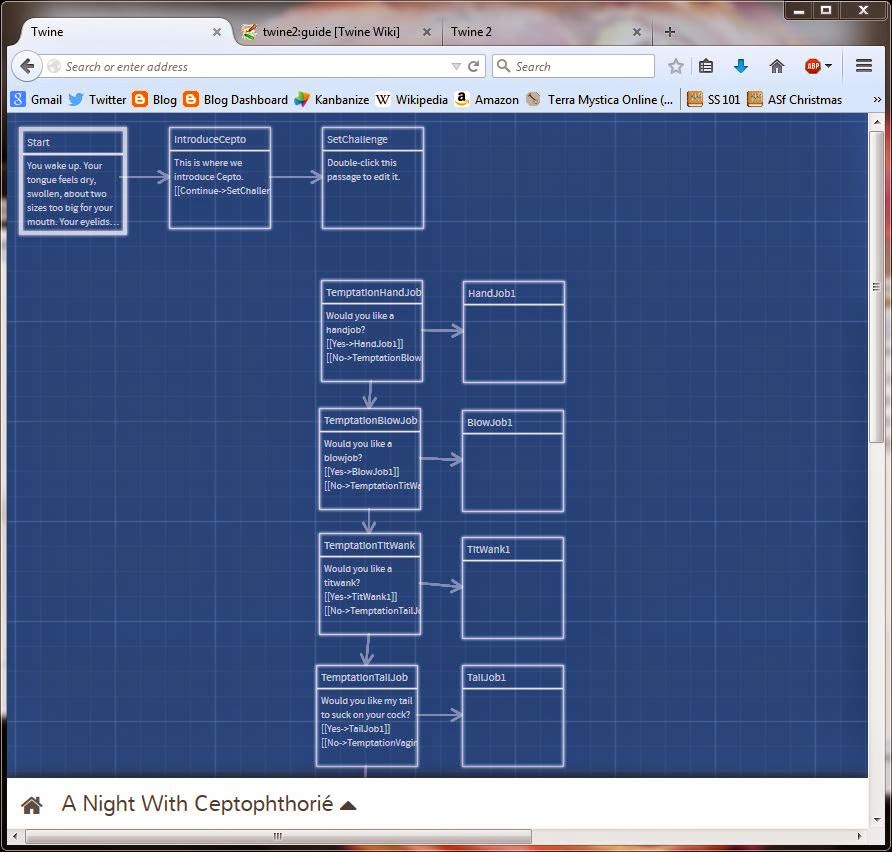 At the moment the lovely Ceptophthorié isn’t exactly tempting.  I’ll fix that when I start to flesh out the passages.
Posted by M.E. Hydra at 12:29