Last time up I put a rough outline up and divided the story into sections based on what sex acts Ceptophthorié was likely to use.

Then the British flu season caught up with me and knocked me on my back for a few days, followed by my usual chaotic tendency to try and work on too many projects simultaneously (a collection due March and something new that will appear next week if I can get the cover finished in time).

It did give me time to think about how to proceed next.  Interactive fiction is a little tricky because of all the branching points and multiple pathways.  As with all writing there is a danger of being stuck in ‘design paralysis’, where the writer gets stuck thinking about what they want to write and how it should fit together instead of just writing it and whacking the plot back into shape with the big editing hammer later.  So I thought I’d throw some sentences at MS Word and see what stuck.

Tentatively I had a three passage introduction – one to set the scene, two to introduce Ceptophthorié, and three to setup the game.  While I was writing passage two I realised the main character (and player!) would likely have questions at this point and I decided to add choices rather than skipping directly to passage three.  This gives a number of advantages.  First off it brings interactivity into the story sooner rather than later.  It also gives the player more control over the intro.  On the first playthrough they have the option of reading the expanded introduction.  For subsequent playthroughs they can skip straight to the sexy.  It’s an obvious thing, and something RPGs do a lot, but didn’t actually click with me until I was going through the design process.

For the first options it made sense to add a couple of background-giving choices.  “What is a succubus?” is a useful one on the off chance the reader is unfamiliar with the mythology.  For the more contrary readers there should also be a “No” option so they don’t feel like they’re being railroaded down a single plan.  This route will probably funnel the reader into an early Game Over.  I’ll flesh it out later with plenty of options to get the reader back on right track and appropriately icky/comedic Bad End if they persist on being contrary. 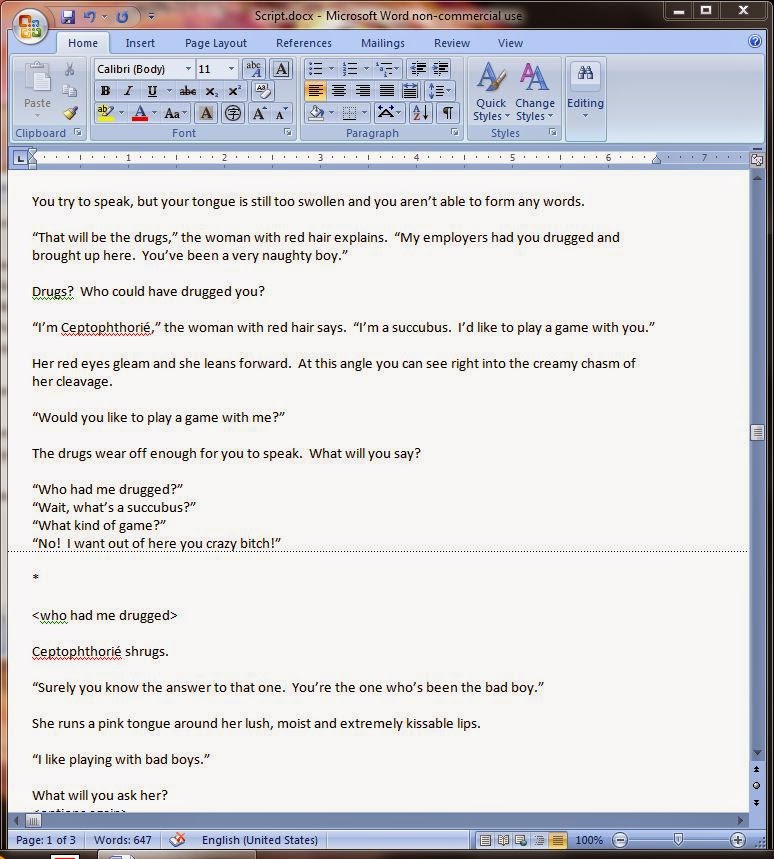 It’s possible to keep track of whether a player has entered a passage before in Twine.  I could do some clever stuff and remove options that have already been taken or have her reply with a sarky “I’ve already told you this!” if the player’s repeat options already taken.  For now I’ll keep it simple and just repeat the passage.

After moving things around (and deleting a passage that was somehow spawned off-screen for some reason), the layout starts to look like this. 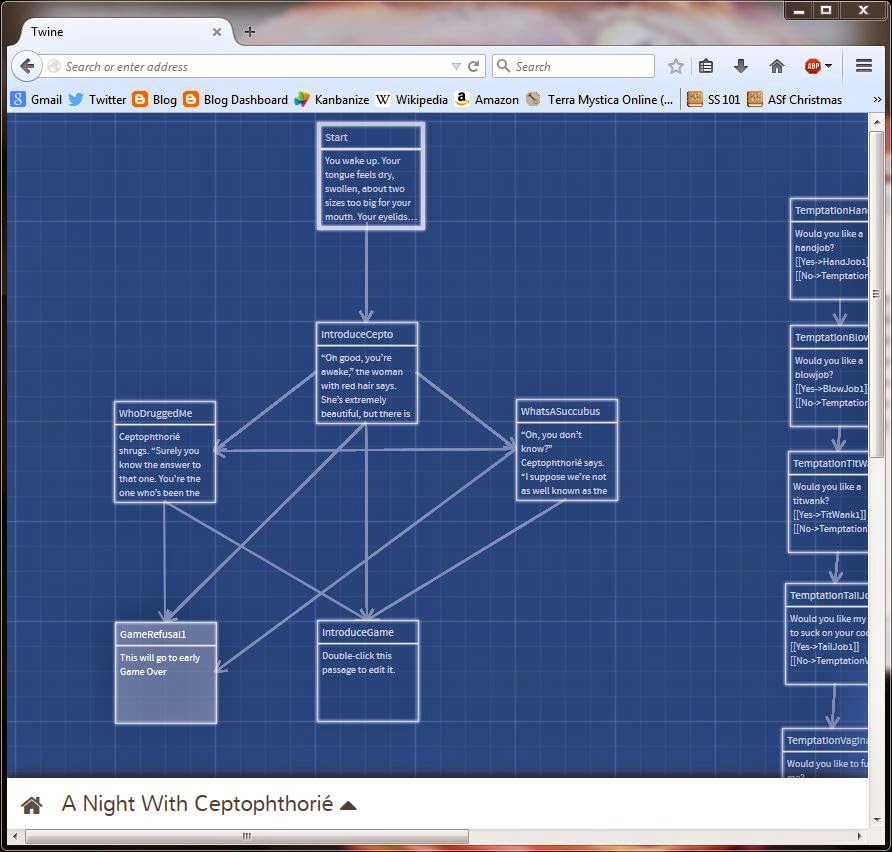 The next step is to fill in the details of Ceptophthorié’s little game and from there provide a seamless link to the smexy stuff.  At this point I’m experimenting in finding the most comfortable way to write these sections.  At first I was typing in MS Word and then transferring the text across.  That felt a little wasteful, so I switched to working directly in Twine.  Then I found it wasn’t as easy to see an overview of the text across multiple passages.  It’s something I’ll play around with.  I suspect the optimal approach will be a bit of both.
Posted by M.E. Hydra at 22:26