Right it’s time to leave the starting village behind and head off to Iliasburg.

First, a confession.  This isn’t the first time playing through this section.  Originally I intended this to be my live impressions while playing through the game, warts’n’all.  Then I bollocksed something important up in Iliasburg that resulted in me wandering aimlessly from village to village, fighting slightly harder wandering mooks each time, but not triggering any plot events at all.  After a few hours of this I swallowed my pride and looked up an online guide (thanks cwhart for the link to the pastebin with the walkthrough).  Machine translation is good enough to give a rough gist of what’s going on, but it’s also very easy to miss specific quest instructions.

I did think about posting those doomed wanderings for the amusement value, but the game is already long enough as it is and endless ‘missed the quest NPC, wandered into the wrong place and got flattened by higher-levelled mooks’ posts would likely get very old, very quickly.

One quick restart later and we’re back on the right path.

Here are some hints and tips from things I noticed from my first – aborted – playthrough.

Levelling the whole party up to level two in Thief and Priest so they all have access to the basic Steal and Heal actions doesn’t work.  Some learnt skills carry over between Job changes.  These two don’t.

Level and Job progression seems very slow (although this might be because I’m playing on Hard difficulty).  There are a couple of accessories that can help out.

The first is Hard Job Wrist.  This is found in the village storeroom in Iliasville.  What it does is double Job (and Race – I think they both level up with Job XP) XP received at the cost of not receiving any normal XP.  The party member I think you want to give this to is Lime.  The game has hinted that Slimes might be the Magikarp race.  Their stats are fairly shite, but apparently they can change race into much stronger slime variants.  Also you want to level up Thief quickly so they gain access to the skills required to open the various colour-coded chests.

The second accessory doubles XP (just normal XP) at the cost of the wearer starting every combat with the numb, darkness and silence abnormal statuses.  This renders them effectively useless in combat, but as you have four backup party slots that still gain XP even if they aren’t involved in combat…

This accessory can (occasionally) be stolen from Imps and is also sold in Pornburg (the village south-east of Iliasville).  As long as you’re sure you don’t need them in combat, equipping the whole back line with this should speed up their levelling.  Just remember to take them off just before a boss fight as it’s slightly awkward when your first line is wiped and the second line comes in blind, immobile and useless.

Right, time to head off to Iliasburg.

No, wait.  There was something else I missed.

What, more mechanics?  How much is in this damn game!

Yet another new addition with Paradox is Battle-Fucking.

This was another thing I missed first time around.  In each village/town there is a girl that offers to battle-fuck Luka.  Now this isn’t a battle-fuck as you might find in battle-fuck games like ROBF.  As explained by Marie in the starting village, it used to be a competition between men and women to see who could make the other come first, but as it was nearly impossible for men to win they changed it to mean the woman has five minutes to use every sexy technique they know to make the man come.  The man wagers a fee and then sees if he can hang on. 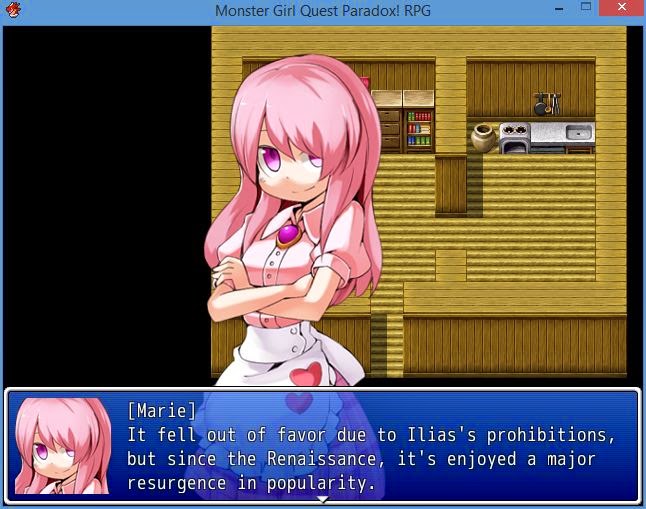 It’s not prostitution at all, oh no.

I managed to miss this explanation and was a bit confused when I bumped into the second BF girl in Iliasburg. 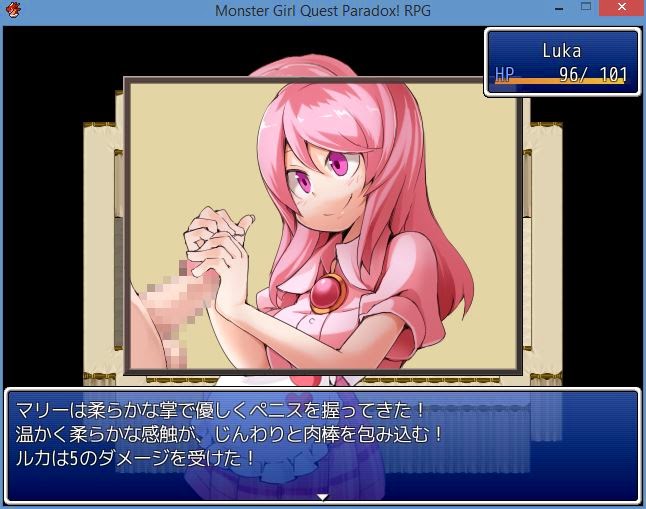 You won’t win.  At least not at first.

Each battle-fuck does a set amount of HP reduction to Luka.  If he has high enough HP, he wins.  If not, then the BF girl is going to be cleaning white stuff off her.

Given all the opportunities for Luka to get off in-canon within Paradox I’m guessing this universe’s Alice won’t be as jealous as the one in MGQ-verse.

However, BFs are more than just an excuse to squeeze in more H content (and squeeze out more white sauce).  In the pocket castle the maid has an option to teleport the player directly to any known BF encounter.  As there’s a BF opponent in each town, the player can use this as a fast means of travelling between already-visited towns.

Hmm, I appear to have gone on too long again.

It looks like Iliasburg will have to wait until tomorrow.  We will get there, honest!
Posted by M.E. Hydra at 13:35