This is my playthrough and guide to Monmusu Quest: Paradox.  If you’re just joining now, the first part can be found back here.

Currently we’re searching for Amira, the wrong-way-round lamia, because she might have information on where the White Rabbit has run off to.  If that sounds weird, welcome to world of Japanese RPGs.

The first dungeon to visit is the hideout of the loli bandits.  That’s a cave to the north-west of Iliasburg.

Across the bridge to the west and the slime girl encounters change to earthworm girls.  One of these wiped my party when I wandered a bit too far north at the start of the game.  Now I’m levelled up and geared up for them not to be a problem… until one asks Luka if he’d be more comfortable with her slippery body wrapped around him.

She winds her slimy tail around his cock and plays with it until he comes.  Then, in the Bad End, the end of that tail opens up and gives Luka a good slimy suck until he’s empty.  It’s the same Bad End as from the MGQ series as far as I can see.

When you recruit her the earthworm girl can also use that attack on enemies and it looks as filthy as you’d imagine.

The first time I played through this section I’d completely missed the end of the Amira quest chain.  On entering the bandit hideout the first thing I saw was an ominous row of grave markers.  It looked even worse after I’d explored the caves and found no sign of the bandits.  Had they been offed in this alt universe and replaced with the adorable imp squad?

No, turned out I hadn’t spoken to the right NPCs.

This time Goblin girl is hanging out at the entrance. 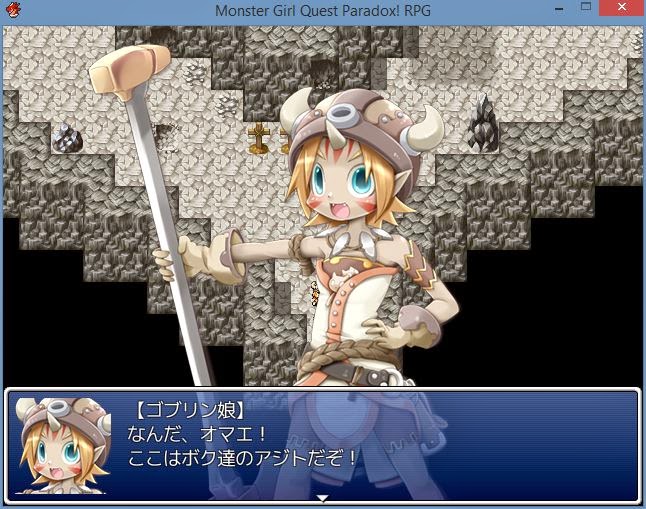 The others are waiting inside. 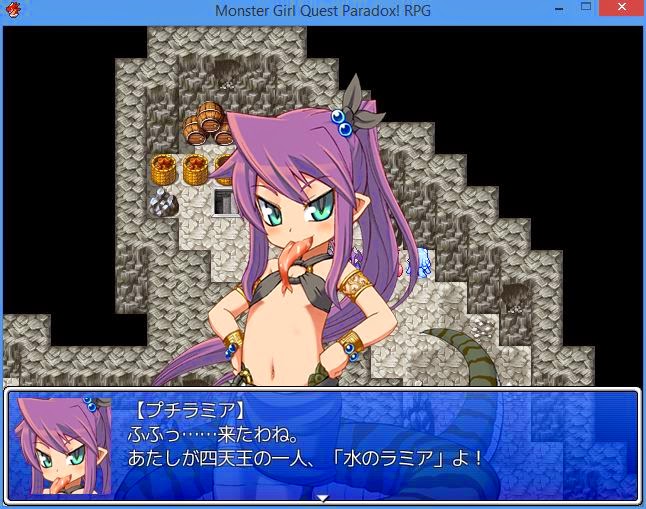 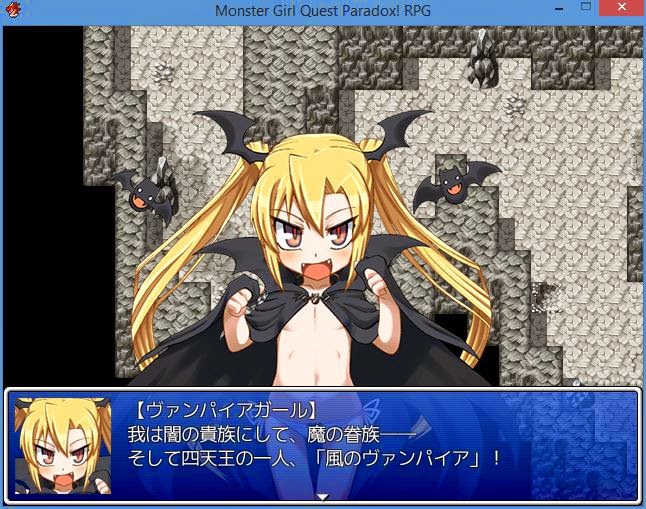 And the Dragon Puppy. 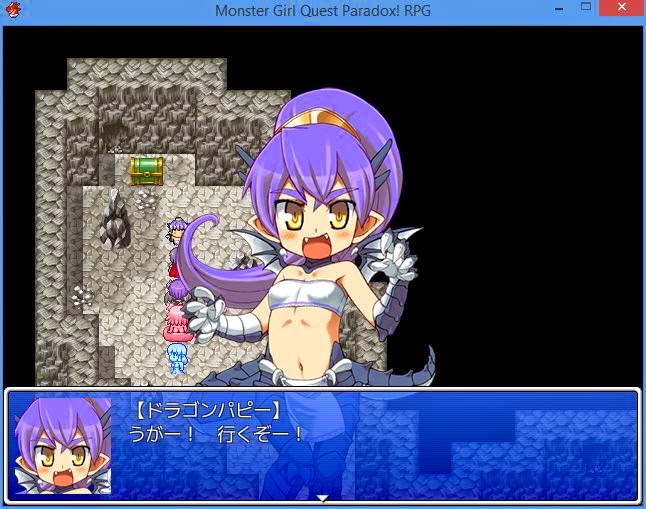 The loli bandits were popular characters from the first MGQ because they were cute, adorable and their role in the story did a lot to show that, despite ostensibly being a sex game, MGQ was going to have a real story and not just a bit of filler to pad out between sex scenes.  In Paradox the story is the same as before – the bandits, crying and snivelling, are taken back to Iliasburg to face justice. 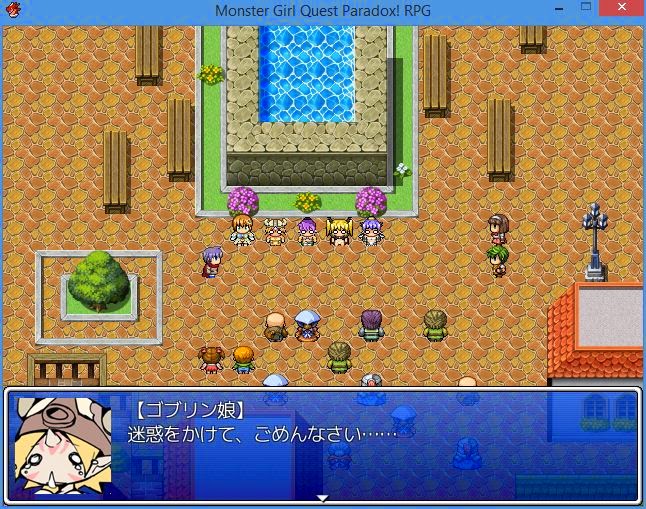 As with the original MGQ series, the townsfolk take pity on the loli bandits and give them all jobs.  In the original series this scene did a lot to establish Luka’s motivation.  He’s not a hero off to slay dragons and fill his boots with gold coins.  Co-existence is his goal and over the course of his adventures he proves this by resolving conflicts between humans and monster girls in the towns and villages he visits (which pays off magnificently in the third chapter).

The scene doesn’t work as well in Paradox.  One, we’ve already seen it before.  And two, the Paradox universe is different to MGQ – monster girls and humans are already co-existing to some extent, so it means less for the townsfolk to take the wayward bandits in.  I’m wondering if Toro Toro Resistance should have varied this section to show the differences between the two universes, but to be honest I can’t think of anything that works.

The loli bandits all have Bad End sex scenes as with the original.  To be honest I never bothered with them back then and not now either.  Didn't fit the characters in my thinking (and loli has never been my thing).  The beauty of the MGQ series as a whole is that it tends to a wide range of kinks.  Bored with the cute and fluffy stuff so far?  Don’t worry, there will probably be some crazier and more sadistic stuff coming along later.

As a reward, Luka and party get a free night to stay at the swanky Sutherland Inn.  There are no sexy bits with Alice this time around (probably a good thing given the current body she’s in).

Tiny Lamia is working there as a maid.  You can ask her to join the party but she refuses as there’s too much work to do as the usual harpy staff are all missing.

Amira (the regrettable wrong-way-round lamia from the first series) is roaming around outside.  One thing I have been impressed with so far is the artwork used to personalise the smaller sprites.  With most RPG-maker clones it tends to be very generic. 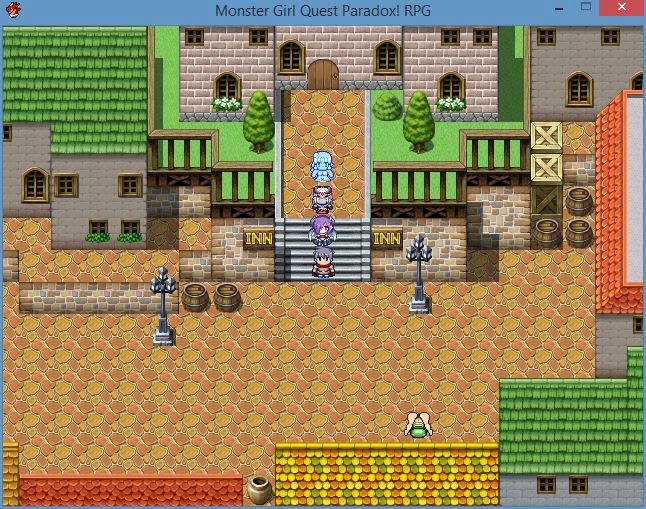 Talking to her gives you the option to either cut her or ask her name.  Cutting her apparently murderates her, and is a Bad Idea.  (all the guides warn not to select the first option as it kills her)

Must… resist… taking the first option.

No, it’s okay Amira.  No fucking way am I spending hours wandering around aimlessly again.

Amira wasn’t kidnapped.  The bandits just stole the trash can she was sleeping in and chucked her away when they realised (no-one wants the unfortunate lamia).

She’s a snitch or information dealer and offers to sell information on the whereabouts of the White Rabbit for an eye-watering 1500G.  It’s best not to pay her and instead select the third option (negotiate) as this opens up a quest line in the Nameless Slum, a village to the west.  She wants information on an illicit trade in phoenix tail feathers (an item used to revive knocked out characters).

But before we head off there are a couple of quests that will enable us to recruit some of the loli bandits.  I’ll go through those tomorrow.
Posted by M.E. Hydra at 09:58