Now this is a game I'm excited about. 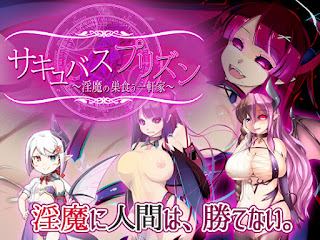 It's another Wolf RPG game, but the same fix I used for Drain Dungeon seems to work here as well.

The plot puts the player in the role of a thief burgling a mysterious house with two accomplices.  The owners reveal themselves to be succubi, the accomplices get sexually slurped to withered husks and the player is imprisoned in the house.  I'm assuming the goal of the game is to escape without being 'eaten' by the succubi.  There also seems to be some weirdness with an artefact found in a library that seems to bring the player back to life.

What made the game stand out for me were the H-scenes I saw in the demo.  They're as hot as fuck and the best succubus Bad End scenes I've seen in a while.  The screenshot I've put below doesn't really do the scene justice.

Yes it's a Shiki'bus and that artist is well known for their luscious pictures of succubi (they also did the artwork for the new succubus characters in Monmusu Quest: Paradox).

The scene is really awesome and I highly recommend giving it a look.

The game isn't out yet, but you can download the demo from here.  (Click the big yellow button to the right of the artwork)