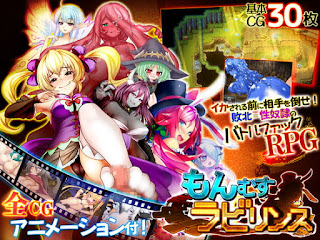 I must confess to being pleasantly surprised by this one.  (So much so, I felt motivated to write a review on it.)

I know, I know.  It's Dieselmine.  So many times their games have looked to have promise, only for them to half-ass it with some questionable design choices.

So it's a surprise to see them make a straightforward monster girl battle-fuck game that gets the basics right.

Yep, they put the animations in the right place this time.  Previous game Monmusu Conquered World had some nicely-drawn succubus/monster girl sex animations, but the actual fights were standard RPG battles and the Bad Ends were static CGIs.

Monster Girl Labyrinth is more like ROBF.  The "fights" are more accurately described as fucks, and the monster girl is animated as she... ahem... battles to reduce your CP (or whatever the HP equivalent is) to zero.  The animations are fairly standard Photoshop-style puppeting, but it's effective and I've said many times before how much even a little bit of animation improves the H-scenes of these games.

The scenes are pretty good.  For most of the girls there appear to be two variants depending on whether your TP (gauge on lower right of screen) is positive or negative, and a third linking them together if you click yes when the monster girl offers to do nice things to you.

Taking the harpy as an example.  Her standard move is to rub your cock between her rather lovely butt cheeks.


Once she gets your TP below zero it's time for full intercourse.


Sometimes she'll give you a yes/no option.  Selecting yes allows her to use a more extravagant "attack" that adds an additional cute little butt wriggle while she has you balls-deep inside her.

(I may have conceded at this point).

Thankfully, there is very little stupid filler this time around.  All the girls get animated (and voiced) battle scenes, regardless of whether they're standard mooks or bosses.  Overall there are thirty separate encounters, which, while nothing compared to MGQ's massive monsterpedia, is still a decent amount for this type of game.


The encounters vary in weirdness from more vanilla elves and wolf girls (kobolds) to... well...


If you liked Aradia from Monmusu Quest: Paradox, MGL also has it's own booby monster:


The other game art is pretty good as well.  Each of the regions you pass through looks fairly distinctive and I love the pixel art of the fast travel screen.  It gives me a real nostalgia vibe of old pixel platformers like Ghouls'n'Ghosts.


Now for the not-so-good stuff.

The gameplay is, as typical for Dieselmine, fairly shallow.  I was unable to hook and translate the game, but was still able to breeze through it in around 4-5 hours.  Selecting basic attack and drinking a healing potion whenever your CP gets low will get you through 90% of the game.  It's also not always clear what's going on in the battles.  I get that I'm doing "damage" to them through numbers on the screen and their CP bar decreasing, but I don't have the faintest clue how it is happening.

At one point this review was going to be a lot different as for most of my playthrough the animations didn't work.  Then the game crashed and when I started it up again I realised what I was missing (as the giant slime girl inserted me headfirst into her pussy).

I can't comment too much on the story as I had to play through this one without machine translation.  I think the plot is you investigate some disappearances in your village, fall into a pit and then have to fight fuck your way through various monster girl territories to return home.  Along the way you bump into a cute witch and cute bunny girl and the main boss is some kind of fairy.

Also, the ending is not quite the ending.  Two of the monster girls (including the booby-trap girl) and a boss are post-credits content that can be found by selecting the 4th option on the menu after completing the game.

Overall, this is much better output from Dieselmine and close to what I want to see in a battle-fuck game.  I would put the animated scenes/battles as slightly above ROBF, but not quite up to the gorgeous shikibus in Succubus Prison.  It's a shame Dieselmine's recent track record has been fairly mediocre, as I suspect the game would have generated more excitement had it been made by anyone else.  I was very close to skipping this one altogether (as I did with Cornelica).  Don't be put off by it being from Dieselmine.  I think this one is pretty good.

I wouldn't mind seeing Dieselmine go back to the better Violated Hero games and revamping them with these newer animated battle-fucks.  Animated Milfy, ooh yes please.

Quick aside on other things.  Unfortunately I appear to still be in a state of complete disorganisation.  Expect things to be a little spotty here while I sort my shit out.
Posted by M.E. Hydra at 17:04