As I mentioned in my review a couple of days ago, Desire Dungeon is a sweet little Monster Girl game that actually plays like a game. This can also make it a little confusing to play (although not as confusing as the massive RPGmaker-type clones). Here’s a handy little guide to ease the pain while waiting for an English translation. 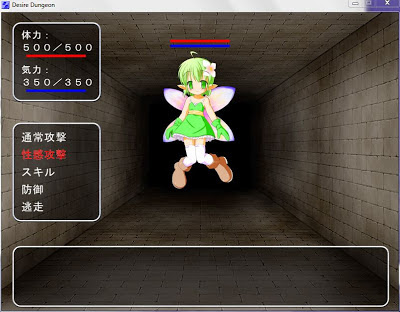 Red bar is life. Blue bar is willpower. If either empties, the fight is over. Physical and Magical attacks affect the red bar. Pleasure attacks affect the blue bar. Most skills also cost willpower to use. (Note, the bars for the monster girl are not displayed until you pick up the Werewolf’s skill)

Command options are:
Physical Attack
Pleasure Attack
Skill (These are picked up from the monster girls)
Defend
Run Away

Monster girls follow different strategies and sometimes switch if you start using pleasure attacks on them. Figuring out how to counter them is part of the fun of the game, so I won’t spoil it.

Defeat the monster girl through pleasure attacks and you get the “good” H-scene and a skill. Most of them are useful and some are essential.

Defeat the monster through conventional damage and you get a treasure chest. 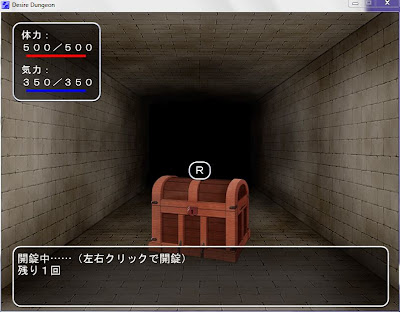 First off you get a choice to open the chest (top) or ignore it (bottom). Successfully opening a chest requires clicking either the left or right mouse button a number of times equal to the chest’s level. You have a kind of thief level depending on accessories carried and latent skills obtained from some monster girls. For each ‘thief’ level you have, the correct option of L or R is displayed. If the chest’s level is higher, you’ll see ?s instead. This means you’ll have to guess. Guess wrong and you’ll set off a trap.

Chests contain money or mystery items. You won’t know what an item is until you exit the dungeon and get it appraised by the shopkeeper. The shop only contains the first two tiers of items. You’ll need to find better items from the chests once you get deeper into the dungeon. 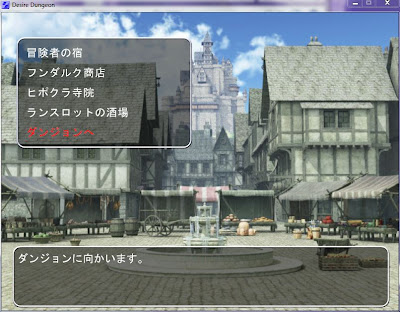 In the town locations the bottom two options are always Talk and Leave. Right-clicking also is the same as selecting Leave (or Back one menu option). 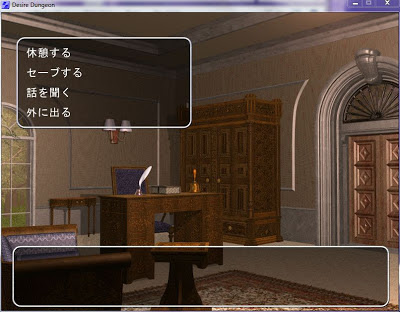 Only the top two options matter.

Sleep: restores health/willpower to full and levels up character if they have enough XP. You can only level up here.
Save Game 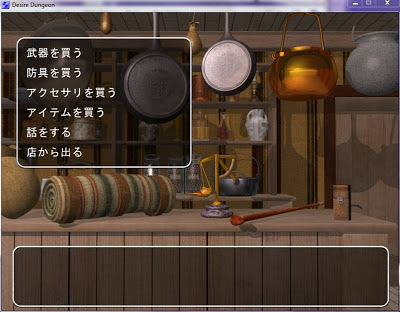 The shop is actually fairly important. First off, this is where you go to have items found in the dungeon identified. This is done automatically on exiting the dungeon, so there’s no need to worry about selecting it. Your character doesn’t carry duplicate items. If you find an item you already have the shopkeeper gives you money for it instead.

The character has 3 stats for both attack and defence that equate to:
Physical
Magic
Pleasure

Weapons and armour focus on one of those three stats in that order. The shop contains only the first two tiers. You’ll need to find the better stuff in the chests.

The shop sells two accessories:
Thief’s tools: Gives +1 to opening chests. (You should buy this ASAP as it makes opening chests a lot easier)
Anti-Paralysis Thing: The witch on the first level has a magical attack that can paralyse the character for a few turns. This negates it.

Other accessories have to be found in the chests. I suck at this, so the only one I turned up was an item that negated sleep attacks (useful against the 2nd boss).

The character can only carry a maximum of 3 of each item.

Potions can’t be used in combat. Mostly you can do without until the 3rd level, where you’ll need a blue potion after each battle.

The frog teleports you out of the dungeon and back to town. The game became a lot easier for me once I figured out what it did. 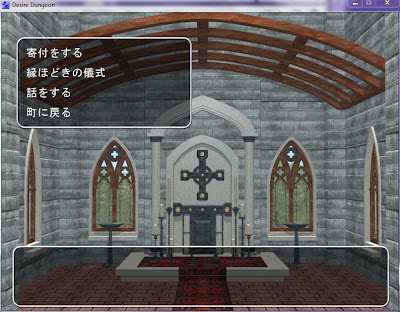 Options are:
Donate Gold: Converts money to XP.
Cleansing ritual: There’s a nasty mechanic in the game. If you lose 5 times to a monster girl, she gets a lot harder to beat. You can reset this, but it costs everything you have. It’s not going to come up unless you want to play the game iron man-style with no save-scumming.


Three dudes tell you how to play the game. Just some basic background info. 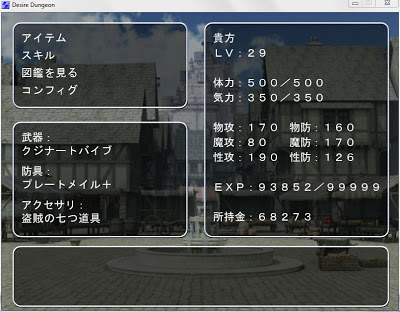 Can be accessed by right-clicking in either the town or dungeon.

Bottom left is equipment in the order of:
Weapon
Armour
Accessory


First off, you can only level up by going back to the inn and sleeping (which doesn’t cost any money).  If you lose a battle, you lose all the XP you picked up and drop down a level (but you also get a naughty H-scene to make up for it).  Lose 5 times to the same girl and they become a lot harder to beat.

Most of the time it’s best just to save-scum.  Save before you go into the dungeon and reload if you get a good bonking.  You don’t lose anything and you keep at the same level.  If it sounds scummy, that’s why they call it save-scumming.

The start of the game will go something like this:

You start off with 100G.  You can immediately convert this to 10XP at the church and go up to Level 2.  But as defeating a fairy gives 10XP and level 2, it’s better to save the money.

Step 1:  Enter dungeon, defeat first fairy (reload if you get smeared by the werewolf instead), exit, level up.

Step 2: Enter dungeon, defeat a couple of fairies (hopefully avoiding the werewolf), exit, level up to 3.

Step 3: You should have about 200G.  Buy cucumber (3rd weapon, tier 1, pleasure weapon).  Beat fairy with pleasure attacks to pick up Heal skill.

Step 4: With Heal, you should now be able to tackle the werewolf.  Be wary of using pleasure attacks as the Werewolf is a lot harder to beat that way (you’re supposed to knock her red bar down first to stop her pinning you, but that hint didn’t come up for me until I’d beaten her the hard way).

From here keep going in and out to build up cash and levels.

The witch starts appearing around step 50.  If her paralyse attack gets annoying, pick up the anti-paralysis accessory from the shop.

Step 100 is the end of the level and the boss fight.  You’ll get a warning prompt at step 99 asking whether you want to go on.


Get the Mimic’s skill early.  She’s appears as one of the trap types (deliberately select the wrong button when opening a chest to trigger the traps).  Her level scales with your character, so you’ll probably need to wait until you’ve got good kit/skills to compensate.  Her skill is +2 to opening chests and makes it a lot easier to find the good items in the level 3+ chests. (I beat her late, which explains my suckitude at finding the cool accessories)

The second boss will auto-win at the start of the fight unless you use Slime’s skill (Mimicry).  This can be used outside of combat and makes a copy of you that soaks up the first attack.  It can also be used in combat and is fairly useful against another of the monsters.

You'll need willpower potions to advance along the third level.  The vampire in particular (despite being a gorgeous busty goddess of lurve) has a very annoying grapple attack that drains willpower while simultaneously replenishing both her bars.

The game caps out at level 30.  I think the developers included this as a ‘you will be able to finish our game no matter how terrible you are (guilty - *sigh*)’ feature.


This didn’t trigger for me (probably because of all my dirty save-scumming), but other players have mentioned there are slightly different endings where the player hooks up with one of the monster girls (text rather than additional H-scenes).  Harpy and Fighter have endings I've been told.  I don’t know if that means there’s an ending for all girls, or what triggers them.  Drop by in the comments if you figure it out.

P.S. If you like this game, you'll probably also like my books
/shameless plug
Posted by M.E. Hydra at 04:41