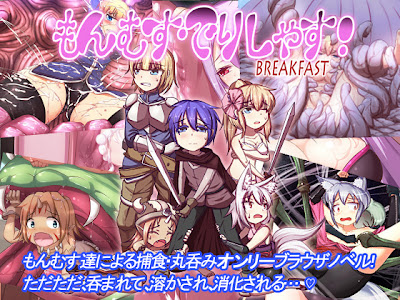 In this case 'appetizer' is an apt word.  This is a collection of alternative scenarios featuring characters and monsters from Monster Girl Quest and is available on the English dliste here.  First off, it's exclusively Vore.  If you played Monster Girl Quest with the 'Let's-Watch-Luka-Get-Eaten-Afterwards' option box firmly ticked off you're probably going to want to give this a miss.

That caveat out of the way, it's not a bad little curio.  You get a bunch of new artwork and alternative Bad Ending scenarios with appropriately gloopy sound effects.  It's not a game as such, more like scenes from a visual novel that 'play' in any browser.  It's not translated yet, but I suspect someone will come along soon with a translated version.

Most of the vore girls from the first chapter are featured.  Luka gets gulped down (again) by the Lamia, Alice, Alma Elma's tail, and also has a very sticky ending at the hands of the Mimic.  Sara meets the Sphinx (aka the What The Hell Were You Smoking Monster at the end of MGQ1) without Luka.  It doesn't go well.  Camel's Cecil puts in an appearance and ends up in the Jellyfish Girl's bell.  Not even other monster girls are safe as the Two-Tailed Kitsune ends up in the Spider's web and the Goblin Girl (what did she ever do to anyone) goes down the throat of the Genie.  In the guest section the Ghost Girl gets a vore scene she didn't have in the original game.  There's also an alternative Bad End for the Blob Girl which is a big improvement on the fairly rubbish one in MGQ2.


If you're a voreaphile, you'll want this.  If you're in the 'eww' camp, steer clear and wait for MGQ3.  I totter on the fence in between.  I like seeing sexy monster girls render their prey helpless, but it's more fun when they follow up with life/soul-draining sex (you may have noticed this trope repeated over and over in my stories! :) ).  Belly bulges and digestion don't really do anything for me.  Each to their own and all that.

(I did quite like the Ghost Girl and Blob Girl scenes)

Oddly, they missed off the Sea Anemone Girl.  Never fear.  I have an idea for a Sea Anemone Girl scenario I might turn into short story.  I'll post it here when done.  If anyone wants to throw some artwork my way I'll happily incorporate that (and throw a link back to the artist's page).
Posted by M.E. Hydra at 03:59