This is a Look rather than a Review because it’s for games I bought but didn’t get into for one reason or another.  This isn’t necessarily the game’s fault, which is why I don’t feel comfortable describing these as reviews for products I’ve only really skimmed the surface of. 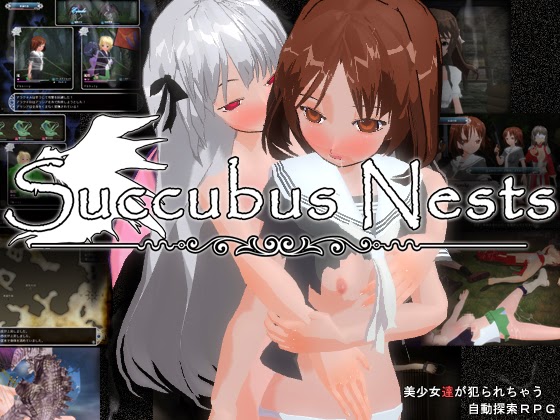 Succubus Nests suckered me with the trial.  And the title.

Admittedly I probably suckered myself by making a hasty purchase without fully checking it out.  Either way it didn’t end up being the game I thought it would be.

The protagonists are three “magical” girls with specialities in gun, sword and magic cards respectively.  They’re trying to fight off the malign influence of a succubus and purify locations on an island.

Back to Succubus Nests.  The gameplay involves selecting a one- or two-person party and sending them off to purify an area.  There’s a screen focused on each party member where you can observe them walking, fighting, or having sexy snu-snu done to them without their consent.  The girls handle the encounters fairly autonomously.  The only player input is to order them to escape or fire off their special attacks.  At the start the girls flatten their opponents without much problem.  As they progress deeper into the area being purified their stamina drops and they become more susceptible to their opponents’ attacks.  At first it’s restraint, but if you don’t yank them out of there it becomes molestation followed by full-blown rape until the hapless lasses end up catatonic.

My guess is there is a strategy to figure out for when to hit certain “nests” and which of the three girls to bring on the mission (they have strengths and weaknesses vs. different monsters).  I never played long enough to figure it out and I found the fact that most of the game runs autonomously a little annoying.


The most common encounter in the trial version are Arachne spider women that try and bind up the player in silk.  This, the title and the presence of a succubus in the cut scene made me think this was going to be a girl vs monster girl game.  Sadly, this isn’t the case.  In the full game the only monster girls I saw were the arachne and a futa succubus.  The other encounters consisted of ugly male demons and non-anthro critters such as maggots, slimes, scorpions, electric jellyfish and even dogs.  Standard ryona (female characters having their clothes ripped off before being abused) fare in other words.


With the little windows onto the action, Succubus Nests reminded me of Pretty Warrior May Cry – another game featuring unmentionable things done to pretty female warriors.  That game had interesting enough mechanics and enough OTT humour to hold my attention even if most of the sexual content wasn’t to my taste.  Succubus Nests fell short for me.

I can’t really say if it’s a good or a bad game, only that it didn’t appeal to me personally.

(As I said with Pretty Warrior May Cry - would really love to see a sexy monster girl version with similar animated sex scenes.)
Posted by M.E. Hydra at 10:13