This is part two of the Monmusu Quest: Paradox playthrough I started yesterday.

Last up we went through the introductory quest and rescued Hans from the bouncing bunny slime.  Back at the village and the game is following the same timeline as MGQ as it’s time for Luka’s baptism.

Before then we’re introduced to the character hinted at in Luka’s diary – Sonya. 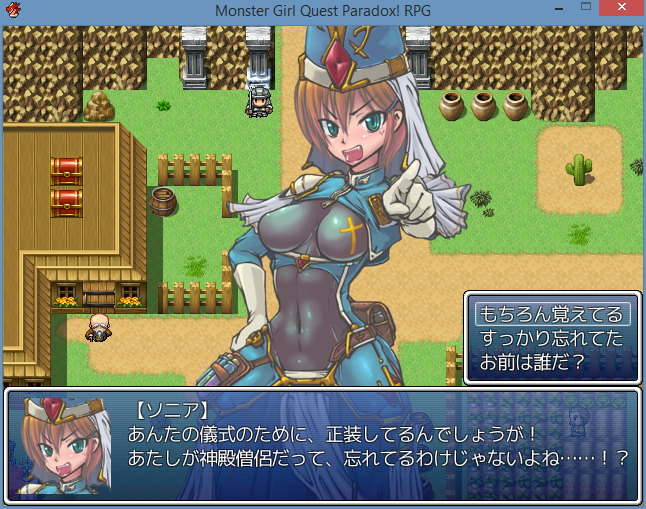 She’s his childhood friend and now a priest at the temple.

The gameplay function of the temple appears to be changing jobs.  I don’t know how that’s going to work yet.  Currently we’ve been receiving both normal XP and something called Job XP.

This time Luka gets to his baptism in time, but everything is twisted in comparison to MGQ.  In MGQ Luka was late, Ilias was supposed to show and didn’t.  In Paradox Ilias has been missing for three decades and the ceremony is largely ceremonial…

…until this time when Ilias comes down in person to tell Luka he’s the one chosen by destiny to save the world from an encroaching darkness.

That causes a little bit of a stir.

There’s even more to come as Luka returns to his inn to find Alice and Ilias fighting in his front room.  Both have been lolified and depowered, and they think the other is responsible.  With their powers sealed they want someone powerful, like Luka (not sure how they arrive at this conclusion), to accompany them.  The problem is they can’t stand each other so it’s an either-or case.

I guess this is where we make the big choice of which one to go with.

If I’d thought about it a bit more, or this was truly live, I’d have thrown the choice open to the comments.  That would have been nice.  But it would have required waiting, and I’ve already waited long enough for this game. :)

Angel God or Monster Lord.  I like bad succubi, so Alice would normally be a snap choice.  Ilias had some very funny lines in the demo, though.  A completely impotent, angry pint-sized genocidal god does have a lot of comedic potential.  I think we’ll still go with Alice and hope they get her out of that loli form at some point.

Alice gives her back story.  A rabbit depowered her and her castle is currently in chaos.  So more of this paradox stuff then.  That means we’re probably going to get a thorough working over by a super-level sexy bunny girl at some point then.

Luka fills in more of his history, and this highlights more differences between this universe and the MGQ-verse.  His dad was a great warrior who went missing.  Lazarus, a crazy terrorist in the last series, was a former member of Luka’s father’s adventuring group.  His sword arm broke down and now he’s a drunken bum hiding out in the village.  Sonya is also the daughter of the priestess from that original party.

Luka mentions Ilias’s appearance at his baptism, which is of course a bit screwy considering Alice was fighting Ilias cat’n’dog in Luka’s inn at the same time.  Shenanigans menanigans.

The next location is the house of the village chief.  He fills in more of the alternate history.  This universe suffered a great cataclysm that sundered the continents, shoved up a mysterious snow-covered continent and opened up tunnels to Tartarus.  Tunnels that are guarded by strange technology.  Ilias vanished back then and since then there’s more magic and more cooperation with the monster girls.

That might explain why no-one thinks it’s odd Luka’s running around with a girl with the lower half of a snake.  Alice is annoyed by the lack of respect as well.

After leaving the chief’s house (after first emptying the chests on the roof) we bump into Sonya, who forces herself into the party.

And another stranger shows up. 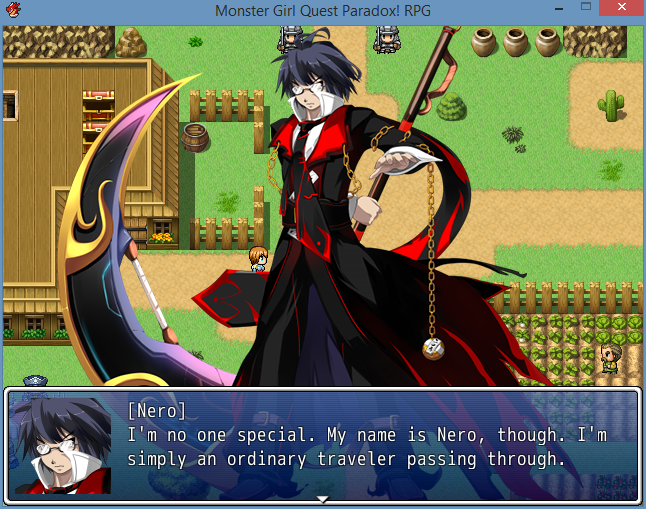 Yeah right, pull the other one.

Both Alice and Luka call him out on it as well.

“Huh, he doesn’t have a childhood friend,” Nero responds.

And various plot point alarms go off.  Has Toro Toro been watching the last few seasons of Doctor Who.  Is Sonya the Impossible Girl?  (and can we pretend she’s Clara Oswald and throw her into the jaws of the toothiest horror we find)

So interesting plot twists ahead with Sonya I suspect.

It also made me wonder whether I should wait for the full English translation.  Machine translation can give you the gist of what’s going on, providing you have a rough idea of what you were expecting them to say anyway.  I doubt I would have spotted this had this section not already been translated into English.

Nah, there’s no fun in that.  Let’s blunder wildly about and throw Luka into as many hungry vaginas as we can find.

In the village is where you can recruit a slime girl for the party.  She’s trapped in the poison marsh accessible to the east.  Heroically wade over to carry her out and she’ll join the party.

Then it’s off to the temple.  This serves a number of purposes.  First off this is where you respawn after Luka has had all the white stuff drained out of him.  It’s also where you go to change jobs, which I guess will become clearer.  It’s also that location every RPG seems to have that’s stuffed full of tutorial NPCs that explain all the various mechanics.

And boy are there a lot of mechanics.  I think Toro Toro might have thrown in every mechanic from every JRPG of the past three decades.  It's going to take a long time to learn all this.

First off there are all the jobs.  There’s a big mess hall full of characters that explain what they all are.  There are the usual types such as Warrior, Priest (healer), Thief, Mage.  Master combinations of those and you unlock more advanced jobs like MagiKnight (magic plus melee, the munchkin power-gamer’s favourite).  There are also weirder jobs like Maid that use plates as a weapon.  Be interesting to see how that works.  Some jobs are available right away.  Others need to be unlocked by mastering other jobs first.  And others are only unlocked by carrying out specific quests.

Upstairs and there are characters explaining differences between SP and MP (SP regenerates after every combat and with each normal attack, MP only regenerates at inns, etc.  Basically spam SP skills all you like in combat, but be careful MP doesn’t run out on a dungeon run).

A bunch of monster girls are hiding out in the temple basement.  (This is where those of you that picked Ilias over Alice get one of the funnier moments of the game). 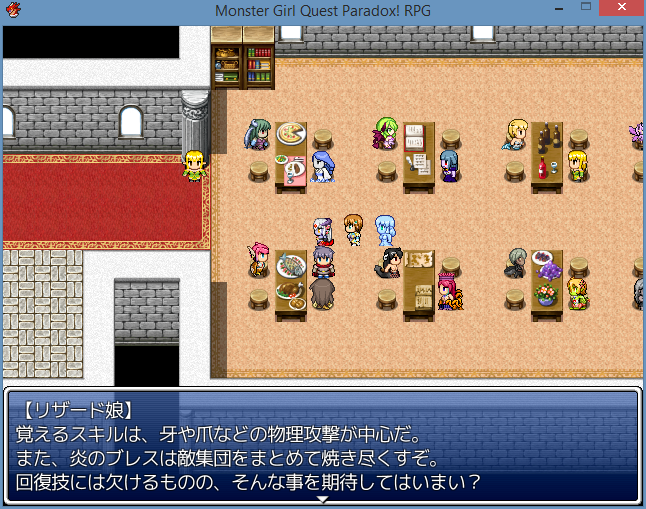 This section of the tutorial temple is to explain the strengths and weaknesses of all the monster girl races that can be recruited.  So it seems that alongside normal XP progression we have both Job and Race progression.  I’m curious to see how Race changing works.  I think it’s probably some kind of tree system.  Lime, the blue slime girl recruited in the poison marsh, explains she might be weak now, but if we level her up she can change (evolve I guess) into a choice of three different advanced slime races.  Maybe that’s how the progression works – Imps into Succubi, etc.

Right that’s a lot to absorb.  It’s also another mammoth post.  I think I’ll break things off there and tomorrow we’ll investigate the wild and raunchy lands around Iliasville (where there might be some actual smutty stuff).