This is part 3 of the likely epic playthrough of Monmusu Quest: Paradox.  Last time I hung out at the main temple in the starting village and attempted to absorb the vast chunks of RPG gameplay Toro Toro has crammed into Paradox.

We’re not done there either.  On stepping out of the village Alice introduces us to a new mechanic – the portable Pocket Castle.

Before then there’s another bit of plot.

As with the first series, Alice notices Luka is holding back out of fear of killing the monster girls and is about to give Luka the Angel Halo sword when—

—Nero shows up and half inches it as being “too powerful” for now.

Although it does make sense.  The usual RPG mechanics of seeking out more powerful weapons would be rendered completely irrelevant if Luka was given an infinity+ sword made out of 666 melted angels right at the start.

Alice is a bit confused by not being able to find the sword, but it doesn’t matter.  As she puts it, monster girls are both tough and not fanatics.  They’ll give in before they get beaten up too badly so Luka doesn’t need to hold back.

She has another prezzie anyway – the Pocket Castle.  This is the headquarters Luka can enter at any time.  I imagine this is where his enormous (assuming he can recruit all the monster girls) harem is going to end up.  The castle is freaking enormous.  Thankfully there’s a maid who can teleport you from room to room. 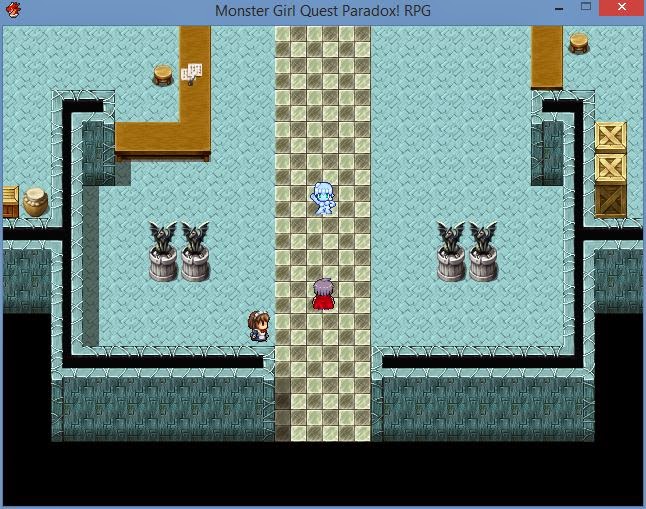 This introduces another mechanic.  Luka can ask his monster girls for various sexy stuff providing their happiness is high enough.  Ostensibly this is a way for Luka (and the player) to safely (sort of) experience the various sexy Bad Ends.  For some monster girls it also unlocks additional scenes such as this delightful Slime Heaven sex scene with the blue slime girl. 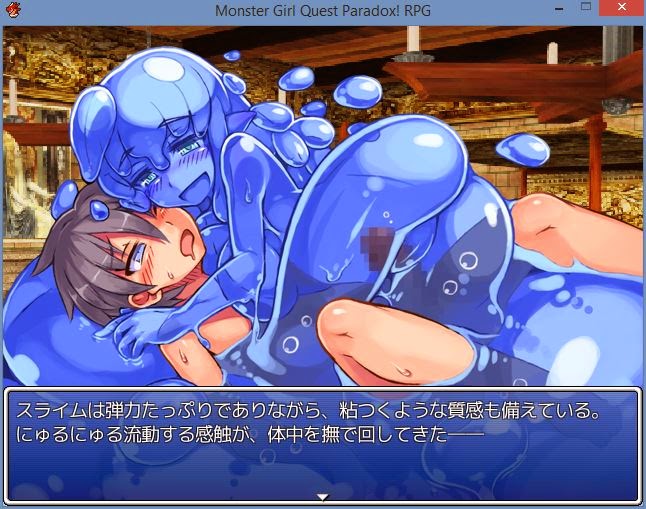 This counts as one I made later.  To unlock it you need to raise her happiness to 100.  Raising happiness is done through giving them gifts they like (fish in the case of Lime) or having them fight alongside you in the party.  For fighting I think they have to be in the active party rather than the backup party.

Oh yeah, that’s something I probably missed.  The max party size is eight.  This is four active members and four backup members.  You don’t have to worry about leaving spaces for new recruits.  If you have the full complement of party members and recruit a new monster girl you’re given the option of sending her or one of the other party back to the Pocket Castle.  (Again, this is something that comes up later, but makes sense to talk about now).

From what I’ve see the backup members pick up XP and Job XP, but not happiness.  Getting Lime up to hundred took a lot of fights and fish, but the reward is a nice gloopy slime girl scene without worrying about the slime girl trying to digest you at the end (you didn’t know MGQ was that type of series?  Oh boy are you in for some fun in these coming weeks. :) )

Also in the castle is a small noticeboard right after the entrance.  I think that’s where various monster girls will leave details of possible side quests to benefit them.

Right, that’s the Pocket Castle out of the way.

Let’s get out there to the fields of hungry wet vaginas.

But first, Lime (the blue slime girl) mentions she’d like to see how the soldier who tried to help her earlier is getting on.  This is a subtle pointer in the direction of the first quest.

The soldier has also managed to get himself trapped in the poison marsh.  We carry him out and he explains how to unlock the Soldier Job.  There’s a Proof of Bravery item hidden in a chest at the bottom of some caves to the south of the village.  It used to be easy to get (as witnessed by how staggeringly incompetent the soldiers of Iliasville are), but now monster girls have taken the caves over.

Seems like we have a first location to check out… tomorrow.
Posted by M.E. Hydra at 11:56