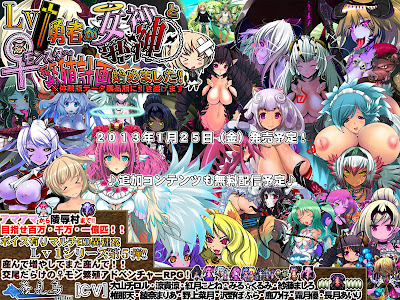 The trial (big yellow button) has to be played to be believed.

The hero(ine?) leaves on some adventure or other and gets waylaid outside the first village by the head of the ‘good’ and ‘evil’ monster girls.  These are an angel/dragon thing and a succubus/centaur thing respectively.  They’ve teamed up to solve the declining monster girl population problem by finding the hero and forcing him to mate with monster girls all across the world.  The first H-scenes give a good indication of what the hero and player...

First stop is a forest inhabited by slime girls.  The hero and a cute slime girl are a bit clueless as to what to do next, so the succubus/centaur girl turns the hero into a raging sex bull monster with a two-foot penis to force the issue.

At this point I’m wondering what the main game mechanics are as sex combat has largely been on autopilot so far.  Then follows a sort of mini-game quest sequence where the hero picks a path and has to navigate traps, treasure chests and other monster encounters.  Then it’s off to the next location—some kind of shrine with a temple dog woman with enormous jugs, a girl with a giant mouth coming out of the back of her head and a talking cat.  There are also lots of cat girls.  Which sets up the next mini-game where the hero has to touch parts (guess which!) of a cat girl’s body in the right order.

Then they all head off on a quest to find Yggdrasil, the world tree (and frequent canon immigrant from Norse mythology to JRPGs).  During this the hero manages to fall off a cliff.  The others throw the cat after him and both have to find their way through a forest maze while chased by a giant lusty minotaur woman.

And this is just in the trial.  The makers deserve a lot of credit for making so much of the game available to sample.  It’s worth downloading as there’s probably a couple of hours worth of material there.  I think in this case they had to in order to get an idea of what the game is about.

Oddly, it works.  The artwork and overall production is gorgeous.  It matches up well with the H-scenes of Violated Hero 2 in terms of quality.  They’re not shy of aiming for an epic feel and proper story either, despite being a sex game.  This is the moment you find Yggdrasil at the end of the trial.


On top of that nearly everything features voice work.  The story and characters have plenty of humour as well, although I probably missed a lot of it through reliance on crude auto-translation.  I had to switch to ITH for the text-hooking on this one as AGTH was struggling, although I’ve been told this code fixes things for AGTH: /HA-C@FC4C8.

The one downside is I didn’t find the game that sexy.  It’s a little too weird.  More like a gross-out sex comedy than a hot porn film, if that makes any sense.  Quite a few of the Bad Ends are straight-up ‘bad’ Bad Ends such as being torn apart and eaten by harpies, or the hero being trapped in a wall of meat while someone shoves a cock down their throat, rather than the ‘good’ Bad Ends more typical to games like Violated Hero or Monster Girl Quest.  In the end it didn’t matter that much as I was having so much fun wondering what crazy shit the game was going to do next.

Worth a look and the trial is extensive enough to give players a good idea of whether the game is for them or not.
Posted by M.E. Hydra at 21:28