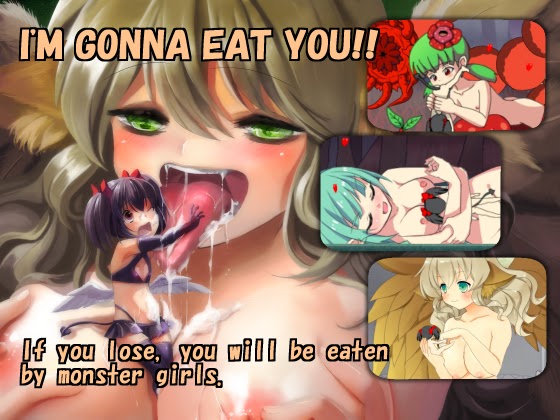 As with the original, Demon Angel Sakura vol.2 is a 2D action game where you fight a series of ginormous monster girl bosses by throwing magic fireballs at them while bouncing around a 2D arena.  Like a platform game, but with all the intermediate levels taken out so all that’s left is boss fights is the best way to describe it.  The text is also all in English, so you won’t need to fiddle around with machine translation for this game.

The story carries on from where the first game left off.  Sakura, an angel/demon hybrid who is either a cross-dressing male or a female with a dick (the game isn’t totally clear on this, although it does refer to Sakura as ‘he’ for most of the game), is trapped in hell.  Kazari, the fairy that loves Sakura, dives into hell to find him and is driven doolally by exposure to the ‘hell element’.  After resisting crazy Kazari’s attempts to consume him, Sakura departs on a quest to find a way to save her from being corrupted and destroyed by the hell element.  This takes him through various fights with ginormous predatory monster girls.


In a change from the first game, Sakura is aided in these fights by a familiar, Kuroha.  Later on there’s an option to switch between her and Kazari.  As with the first game, if Sakura takes enough damage he loses his clothes – and in this game, familiar – and is vulnerable to sexy(ish – YMMV) binding attacks from his opponent.  There are variable difficulty settings and even the most useless at 2D platform games (i.e. me) should be able to get to the end on super easy mode.

There are eight boss fights in total.  Two of those have two different Bad Ends, which gives ten Bad End scenes in total.  The game is short (especially if you choose to breeze through it on super easy mode), but should be seen for what it is – an excuse to put together some lovely drawn and utterly depraved hentai scenes.  The artwork and animation is very good for what it is and the imagination behind them is positively filthy.  Even Luka from Monster Girl Quest and the various protagonists of the Violated Hero games would wince at the indignities visited on poor Sakura.


This game won’t be for everyone.  There’s a heavy focus on vore and most of the things that happen to Sakura are fairly gross, such as nearly being drowned in harpy piss or wedged up in a giant treant’s sweaty armpit.  You’re not going to find nice sex scenes with vanilla monster girls here.  The game is most appropriate for those with giantess and/or vore fetishes, as well as for those that derive amusement from seeing some truly twisted and perverse Bad Ends.

This doesn’t look like the last we’ll see of Demon Angel Sakura either.  During the quest to save Kazuri there are hints to a larger story, one that will no doubt be revealed in Demon Angel Sakura, vol.3.   I look forward to seeing what weirdness the developers come up with in the next instalment.
Posted by M.E. Hydra at 15:44