Righty Ho.  We're off to the pyramid to ask the Sphinx how to cure her badly-behaved great-great-great-great-[insert how many greats you figure would fit in a 1,000 years]-great granddaughter.

If none of that made any sense, you'll want to start here and then continue reading through the other 37 parts of my Let's Play Monmusu Quest: Paradox series (why on Earth did I agree to this lunacy).

Before running off back into the desert there's another Vanilla sidequest to update.  This time the mercantile-obsessed vampire wants advanced throwing stars.  She's wondering which of the item stores on the Sentora continent to enquire at when Luka points out they might as well ask the same guy we got the basic throwing stars off.  Job done (it's the samurai NPC back at the Ilias temple in Iliasville in case you've forgotten).

Now for the Sphinx.  Her pyramid is out in the desert almost straight west from Sabasa.

Standing by the entrance is a friendly scorpion girl.  She asks if we're on the trial of the dragon.

Where are the heavenly knights anyway?  I thought we'd seen Tamamo earlier, but that was just me failing to parse the badly-translated Japanese correctly as it was the White Rabbit in disguise (thanks for catching that, Yuuto and others).

But don't answer the heavenly knights question – no spoilers… ;)

The scorpion girl also warns us that the mummies inside can petrify unwary adventurers and offers to sell us the gold needles needed to cure petrification (This is possibly a scam – none of my party members has been petrified so far).  I suspect Vanilla will be back here at some point when she decides to upgrade the item shop to include gold needles.

As the NPCs mentioned back in Sabasa, the pyramid is chock full of treasure.  At the end of every blind alley is a treasure chest and even the Nefertiti lamias of the top levels start throwing gold at us like it's rice once we get their happiness high enough.

In one of the chests (I think it's the green chest) is another fancy XP-modifying accessory – Shoes of Happiness.  Normally I'd be excited by 150% XP with no drawbacks as I'm the greediest McGreedison when it comes to bonus XP in RPGs.  Oddly, they're not that good in Paradox.  At this point Job XP seems harder to come by and Bondage Rope is still just a better way to level up characters on the back row (assuming I'm understanding the math and mechanics correctly).

Sadly there are no new monster girls in the pyramid.  All are repeat encounters from the previous MGQ series with the scorpion girl added to make it up to the usual four encounter types per game area.

So we get the aforementioned mummies: 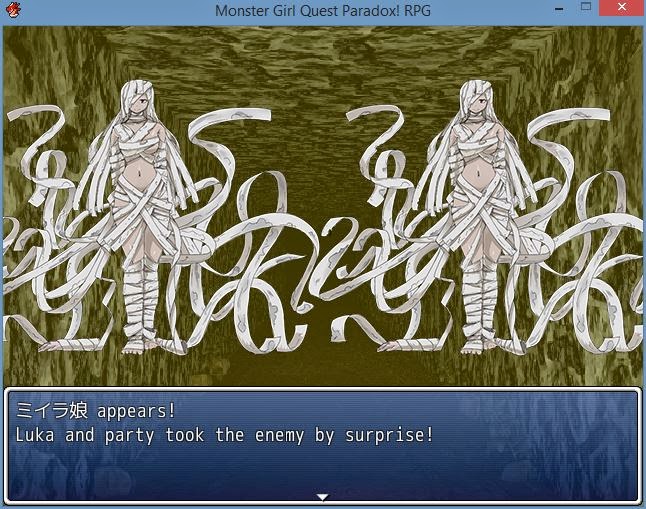 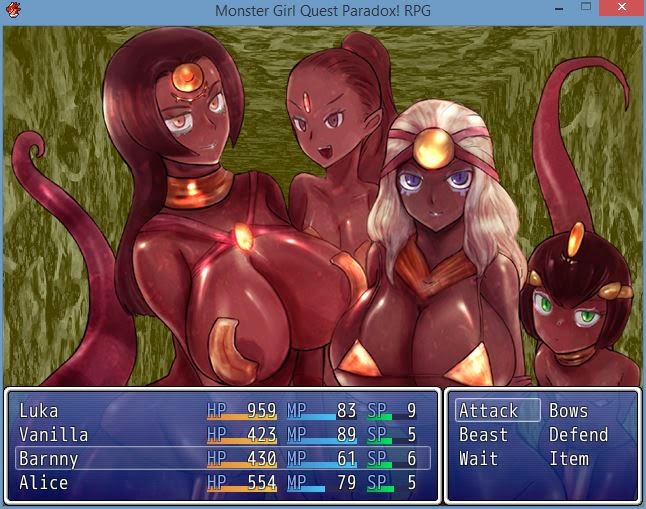 And something called a cobra girl despite well, see for yourself: 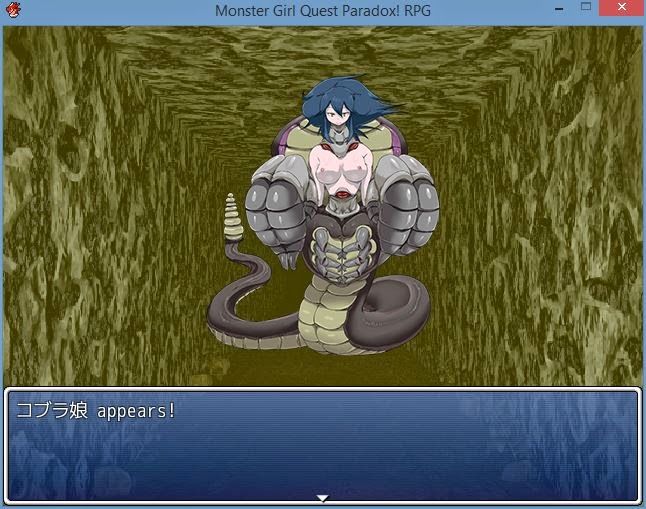 What is it with those claws?  I can only think it was drawn by someone with a vague impression of what a cobra is, and possibly got it mixed up with an armadillo in their head.  Or – more likely – about halfway through they decided she needed moar weird and grafted some additional Lovecraftian appendages onto her.

I'm curious to see what cobra girl's Bad End is.  It can't be the same as in the original as in that one she strangled Sara to death while taunting Luka over his inability to hold back from coming in her tight pussy.  In Paradox she's no less sadistic.  Her joy at strangling both Luka in her coils and Luka's cock in her muscular pussy is quite perverse. 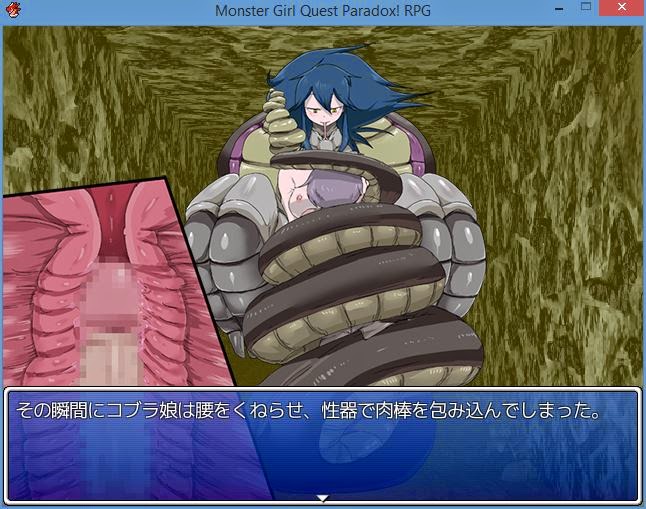 Might want to make sure you've plenty of sausage on hand before interacting with her back at the castle, Luka my boy.

Then, at the very top of the pyramid we run into one of the WTFiest monster girls of Monster Girl Quest's first instalment. 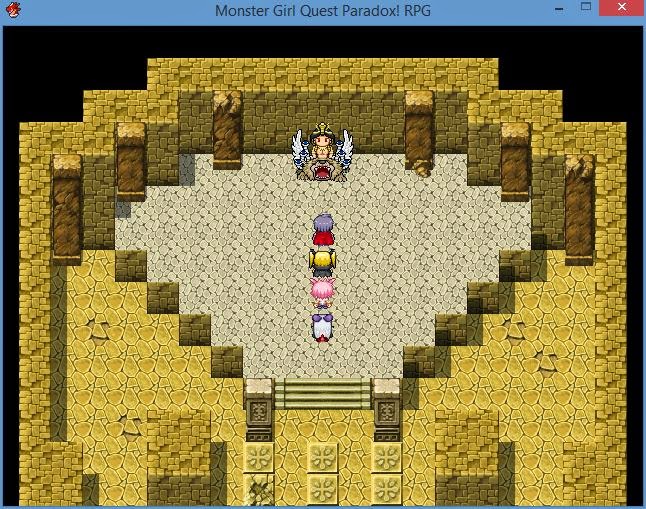 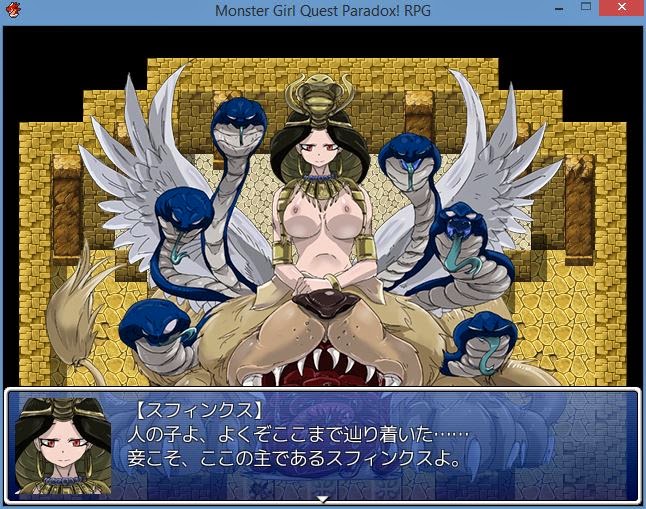 Huh, am I supposed to fap to this?  How?

The second dialogue option is to challenge her to a fight.  Don't be stupid, Luka.

The guide I'm following advises not pissing Sphinx off.  Probably a good plan.  In the original series she was an unwinnable fight.

The first option doesn't appear to be helping much either until Alice explains the situation.  How do we transform sweet Princess Sara back to her original human form?  Oh, we can't.  Once her monster blood awakens that's it.  It's also the reason she's out of control now as she's neither one thing nor the other.  Sphinx offers a typically MGQ solution – force her to go full monster.  This will allow her to get control back of her body and shake off the influence of whoever's pulling strings in the background.  Sphinx gives us a vial of her blood and tells us to make Sara drink it.

Uh… if you say so Sphinx.