For this playthrough, and having no real clue as to the various benefits and drawbacks of either, I decided to side with Lucia.  She sounded slightly more reasonable than Lily.  I was also basing it on what I knew of the characters in the original series, not that that's relevant as both characters are slightly different to their MGQ counterparts.

Also, Lucia has the bigger tits.

Caveman snark aside, I doubt there's a correct answer here.  TTR loves playing around with shades of grey (no, not those Shades of Gray!).  It will be interesting to see if this choice has later repercussions in further chapters.

It also gives the game a little bit of replayability (Ha, like there isn't already with a 100+ roster of characters!).  This time up I picked Alice and Lucia.  When the English translation comes out I'll run with Ilias and Lily.

After we inform Lily we're here to punch her lights out, she sensibly uses her magic to chuck us out of the front door of her mansion.  It then becomes a conventional dungeon location.

In one of the rooms to the left I notice two chests.  One of them is suspiciously placed.  Obviously a mimic.  Now let's take a look in these pots first... 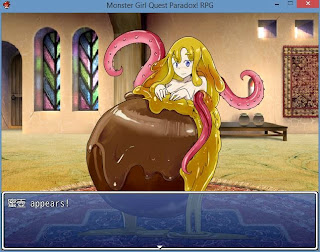 Oops.  I should have been more concerned about the pots.

Honey Pot is an upgraded mimic.  She has a similar suite of attacks – the one difference being a lash-all tentacle attack instead of mimic's devour attack.  As with mimic, she's designed to be way harder than the party the first time she's encountered.

And she is.  Luka can go toe to toe and his anti-ghost heroism attack in particular does a lot of damage.  The rest of the party (particularly the back line crippled with Bondage Rope) can't.  And... 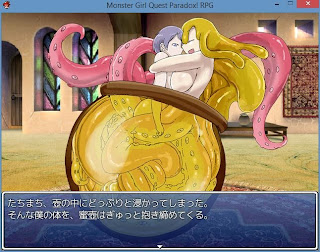 At least she's not as predatory as mimic.  Her Bad End is to soak Luka in her ecstasy honey and squeeze out his seed forever.  Those are usually considered the better MGQ Bad Ends.

A quick jog back to the mansion, some more exploration and...

Okay, that's enough pot fucking.  The Honey Pots are a bit too hard for the current party.  I think we'll leave off checking any pots for treasure until we've levelled up the rest of the party a bit.

Monster girl encounters are the same as encountered in Lily's mansion in the previous series.  So we get the weird'n'wonderful iron maidens ( \m/ ) and suck vores. 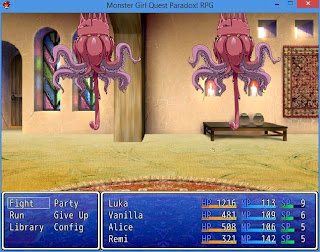 Despite their unusual appearance, the suck vores are female.  TTR had to add a scene to the original MGQ showing a girl transforming into one just to show that.  I've also been told they're adorably cute when you recruit them, but as of writing this I haven't managed to recruit one to verify this.  Even with 100 affection and a 2x Recruit Chance ability on Luka thanks to the Demon Trainer job they're (and this is true for pretty much all the monster girls in Lily's mansion) still coy.

The new monster girl is one that was previewed on TTR's site previous to Paradox coming out.  I'd forgotten she was coming up to be honest.  Both me and machine translator make a hash of trying to figure out what her name is, so I'm just going to go with Bitey Scylla for now. 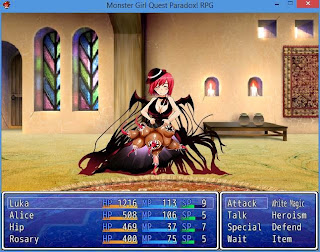 She is disconcertingly toothy.  In her Bad End she advises Luka to stay quiet and not struggle otherwise things might get bitey. 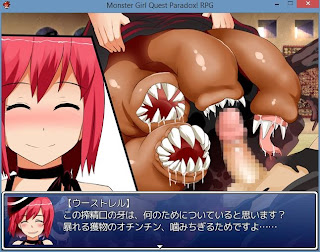 Hmm, sit back and let her suck all your man juice out, or struggle and get bitten in places we'd rather not imagine teeth being near, ever.  Talk about Hobson's Choice (or not, I'm getting my metaphors wrong – the correct one I meant is Morton's Fork.  Or is it Sophie's Choice.  Yeah, let's quit while I'm behind and move on.  And not think about teeth.)

The worm villager also shows up, but she appears to be a fairly rare encounter.

There are some steps leading downstairs, but trying to go down them results in the party being teleported to the first floor instead.  There's a crystal-ball-shaped item in a chest on the first floor here 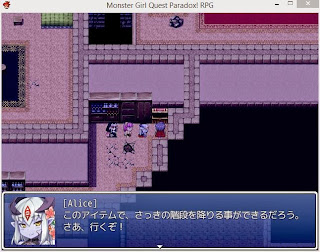 that Alice informs us will be able to break the magic on the steps down.

The steps take us down into Lily's dungeon.  Her mind is clearly not in a good place.

We find her in her study at the end of short corridor.  She says she acts for the oppressed and that we can still change our minds.  I consider it, mainly because I know Lucia's area is the tower to the south of the village and I'm not sure if beating Lily here locks it away from the player for good.  I've got a previous save anyway, so it's time for a battle. 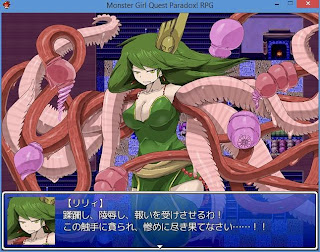 Hmm, Lily, don't you think this is a little forceful for a temptation attack. Near the end she makes another plea for us to change our minds.  She mentions how Lucia has been her assistant ever since she was a small girl.  The game gives three option and to be honest, machine translation doesn't make any of them that clear.  I go with the second option, which results in a fight to the end.

Afterwards Lily acknowledges her defeat, but rather than her join the party as has happened with every fight so far, the game ominously tells us Lily has lost her mind.  As suspected, we can recruit either Lily or Lucia but not both unless in NG+ or hacking the game.

Going back to Lucia she tells us Lily had become obsessed with the voices of the oppressed and it had driven her mad.  Then her portrait changes to something a little more sinister and she says something I didn't catch but causes Luka to give the "............." response.

Oops, did we fuck up after all.

My worries about Lucia's area being locked out should the player side with her turn out to be unfounded.  Paradox as a whole has been very careful to make sure every area can be returned to by the player.  On beating Lily, Lucia's tower in the south opens up.  We'll have a nose around there tomorrow.
Posted by M.E. Hydra at 12:16