Closing Thoughts (Yes, this is just an excuse to take it up to 50 posts)

This is the last post in my Monmusu Quest: Paradox: Chapter 1 playthrough.  Yep, I was crazy to do it, but people asked for it and it was fun if probably not the most efficient way to promote my own books.  The first part can be found back here and the series runs almost daily until we get to here, the end (until chapter 2 comes out).  At some point I'm considering migrating the blog over to a WordPress site, which will hopefully organise these posts in an easier way to navigate and ideally preserve all the original comments as well.  Thanks to the people that commented and more importantly provided corrections and clarifications.

I'll do a full review at some point.  This will serve as a point of reference for people that don't want to plough through 40,000 words or so of raw playthrough observations.  For here I'll finish up with some thoughts on the story.

The story is nicely poised.  Something went wrong in the past of one of the alternate worlds and now that's seeping out to devour other existences.  In the Paradox world multiple factions seem to be trying to get Luka (and Alice, although I don't know how depowered Ilias fits into it) to follow the same path as the MGQ series, even as far as going behind the scenes to change a world with friendlier relations between humans and monster girls to match the encounters the other Luka had in the first series.  It will be interesting to learn why this is happening in the forthcoming chapters.

I think once again the creators have achieved in their aim to produce something that isn't just a random sex game.  Just because the primary focus of the series is to shove in as many weird and wonderful explicit sex scenes with hawt monster girls doesn't mean the basics of storytelling such as plot and character should be ignored.  Paradox achieves this with a storyline that resembles the complicated plots of previous JRPGs such as the Final Fantasy series.

It's not been perfect.  Some of the re-visited locations seemed like they were only there because they were in the original.  A major plot point seems to be making Paradox!Luka follow in the footsteps of MGQ!Luka despite the differences between the worlds.  I'd have liked to have seen the story play around with those differences a little more.  Some of the re-visited sections felt like flat retreads of the original series only present because the creators wanted to include everything from the original game regardless of whether it fits or not.

The final boss for the chapter, Adramelech, also came out of nowhere.  Normally the presence of a powerful endboss is teased before they're actually fought.  I suppose this might be a function of this being chapter one rather than the whole game.

These are only minor niggles to be honest.  The rest of the game is suitably epic.  RPGmaker isn't the best at conveying atmospheric locations such as the haunted labs of Tartarus or a world crumbling under the onslaught of chaos.  That's what an imagination is for – after all, books don't come with Hollywood-style special effects either.  Overall Paradox is way more than most would expect from a mere 'sex' game.  Good work as usual, TTR and crew.

Now for some thoughts on doing this playthrough series.  I knew there would be a lot more content than the usual Violated Hero-type games I've done this for in the past.  For that reason I decided on a daily schedule otherwise it would take forever to get through the whole game.  Sticking to that schedule was fairly brutal and my other writing projects took a hit in the process.  I'll still be doing this for the future MQ: Paradox games, but probably not for every monster girl game.  It's too time-consuming and to be honest, the other games rarely turn out to be as creative or as interesting as this one.

What now.  One thing the daily posting schedule was good at was fostering discipline.  I think I'll see if I can stick to it for some of my original fiction series.  Knowing you have to put out 800 words or so a day is good for focusing the mind and keeping a story moving. (although please accept the quality – typos, etc – won't be as high as the ebooks I've put out.  I intend to be writing fast).  I know readers would love it if I did this for the Succubus Summoning series.  Maybe for a 301 arc.  201 is still being dug out of a pit.  Ironically, that one I did try to plan out in advance and probably made more mistakes than the more chaotically written 101 arc.

I think the first serial to get going again will be Jackson's adventures in HRPG-World.  They can be read here (1, 2, 3, 4) to get a flavour of what they're about.  So don't run away just because I'm done with TTR's Monmusu Quest: Paradox game.  Plenty of sexy monster girl action still to come.

The other thing I want to get restarted is the game design stuff I was fiddling around with at the start of the year.  That ended up going on the backburner with all the other chaos going on.

Also, if you've enjoyed what you've read over the last month or so, please support me by checking out my ebooks on Amazon, Smashwords or even directly from my publisher.  A stable income means I can continue doing series like this.  (and I guarantee you'll enjoy the books ;) )

Oh, and we can't sign off without at least some sexy stuff.

In Paradox Luka can challenge Death to a fight. 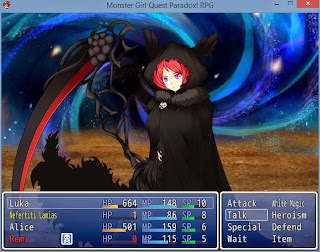 Yep it's a very bad idea (assuming you can even get past the full-grown Alice Death throws at you to prove you're even good enough to challenge her). 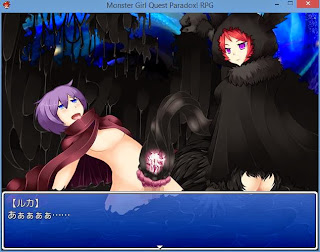 At least, like most of MGQ's denizens, she gives Luka a pleasurable send off to oblivion. 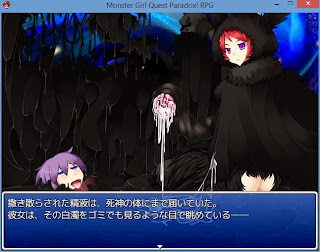 Oh well.  That looks like the last from Luka until Monmusu Quest: Paradox: Chapter 2 comes out.