Why Succubus Summoning 213 isn't up on Literotica 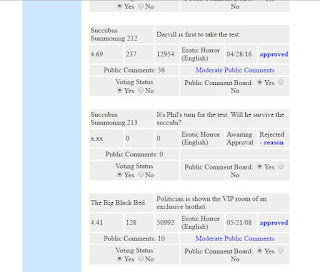 Okay, so I suppose I shouldn't have left it with no other comment than a frowny face.

As far as I can tell, in my excitement at finally finishing a story arc I started five years ago, I accidentally fell foul of Literotica's strict rules against self-promotion in my closing note.  This paragraph is likely the sticking point:


"I'm aiming to collect all the 201 chapters together into an ebook/print book.  Look out for that when it hits Amazon.  (Feedback on the ending or anything is welcome – If I've screwed up here, there's still a chance to fix it before the final book version!)"

Literotica doesn't allow advertisements or links to other sites.  This is a reasonable measure to stop the more shameless self-promoting writers from bombarding and annoying readers with an endless stream of BUY MY BOOK! links rather than telling a story.  Also, because of the large number submissions they receive daily, I believe the first line of checking consists of crude text filters and/or rapid skim-reading.  Thinking I might have tripped that with the Amazon mention, I removed the sentence, added a note that there wasn't any advertisements or links to outside ebook stores/blogs and resubmitted.

And got bounced again.

At this point I went "Hmmmm."  The rejection reason was clarified as they don't like writers referring to any writing outside of Literotica, but this doesn't match up with the guidelines they give in their FAQs, which are more concerned with forbidding links to or mentions of other websites.  As it's a second rejection, I have to assume this isn't a case of an auto-filter tripping up and returning a false positive.

I've seen other writers remove their work from Literotica after getting it published (self or otherwise) or even start serials with the intention of pay-walling the ending off in an Amazon ebook (I understand writers' desire to get paid, but this is a dick move).  I didn't want to do either of these things with the Succubus Summoning series, but to be honest, having the last chapter of the arc bounced for what seems like really trivial reasons turned something that should have been a source of some excitement for me into something that put me into a bit of a funk.  As a result I decided I wouldn't be making any further effort to tweak the chapter into a version that might be accepted.  I have reserved a provisional release date from my publisher, eXcessica.  The ebook version will be coming out soon.  Literotica can wait until after that.

After the ebook is out I'll probably go back and make another effort to see if I can get Succubus Summoning 213 accepted by Literotica, or remove the whole 201 arc, depending on how I feel.

The main purpose of this post is to have something to refer Literotica readers to when they ask why 213 hasn't gone up.  Or for when/if someone accuses me of dick moves when they see the ebook come out before the ending on Literotica.  (I'm not holding the ending hostage - it's here on my blog if you want to read it.)

Gah.  What an annoyance.  Oh well, the chapter has been submitted.  It's out of my hands as far as I'm concerned.

As for the collected Succubus Summoning 201 novel, I'm still waiting for cover artwork and other things.  As soon as I'm confident everything is ready I'll start publicising the official release date.
Posted by M.E. Hydra at 20:45