Finally (it's only a couple of weeks late) the second short in the Sandwiched by series is up.  It's not exactly short either.  I got a little carried away and there's over 10K words of slimy fun (for the slime girls, not necessarily their prey ;) ) in this one. 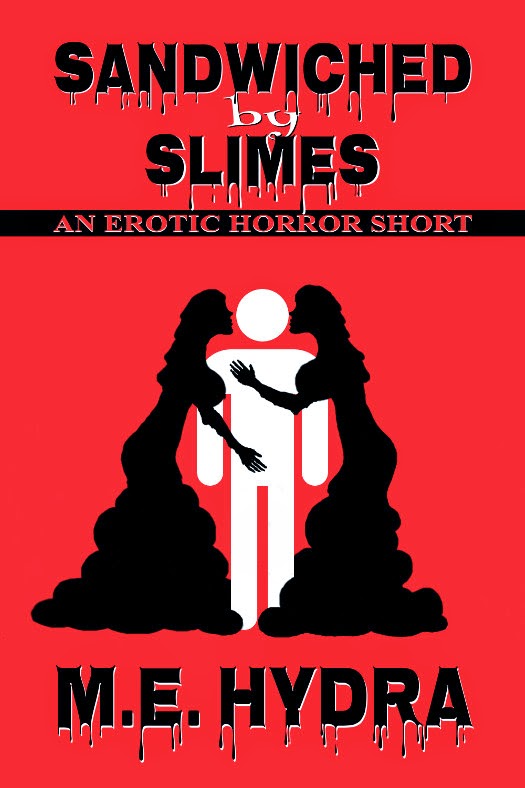 It's available for the cheap price of $0.99 from:
Amazon
Smashwords (which will distribute it to other sites)
Kobo

Freddy Lamb used to be a normal engineering student like any other.  Now he’s Sir Fredrick of Lamb, a brave adventurer tasked with deposing the villainous sorcerer king of a strange world that resembles a computer role-playing game.  In reality he’d rather escape this crazy computer game world and find a way back home to Earth.  He thinks the exit may lie in an unusual bonus dungeon, but blocking his path are two sexy slime girls, Corybosom and Rubisia.  They intend to envelop him in their gelatinous bodies and melt all his resistance away with pleasure.  They also don’t intend playing by the rules . . .


And of course I couldn't leave it there without providing a little snippet to get the blood going:

They looked as though they didn’t understand his question.  Freddy thought they were pretending.

“I mean, is this a sex dungeon?” he elaborated.

The slime girls’ eyes lit up at the mention of sex.

Freddy blushed.  That confirmed his suspicions at least.  Normal RPGs didn’t go near sex apart from the mildest of innuendo.  But there was a type—a more specialized niche—of RPGs where sex was integral to both the art and gameplay.  Those games were made only in Japan as far as he knew and were most definitely for adults only.

The two slime girls pretended not to understand.

“We don’t fight with weapons in here,” Freddy said.  “We fight with sex.”

“This is a sex-themed dungeon,” Rubisia said.

Freddy smiled.  He’d figured it out.  Battlefuck rules.  He didn’t know those games very well, but he’d heard of them.  He thought back to the shop owner who’d sold him the map.  He’d thought the queer leer on the other man’s face was a little odd at the time.  Pervy fucker.  He knew exactly what this dungeon was about.

“So how does this work?  The victor is the one that makes the other come first?” he asked.

She gathered the gelatinous substance of her body together into a big round cushion.  She sat back on it and opened her legs.  Staring directly at Freddy, she reached down between her legs and parted her labia with her fingers.

Freddy took off the armour protecting his legs and removed his undergarments.  His erection popped up and stood out from his crotch.  That’s what no sex at all since arriving on this freaky world did to you, he thought.  Even sentient giant gelatinous blobs started to look sexy after that long.

Corybosom beckoned him on with a finger.  She pouted plump, kissable lips.

Time to see if his theory was correct then, Freddy thought.  He stepped up between her legs.  He put his hands on her hips.  They felt moist and elastic like jelly.  He aimed his cock in the direction of her gaping sex and pushed forwards with his hips.  Corybosom’s head went back and she gave a little “ooh” of pleasure as he entered her.

She didn’t melt his dick off.  He didn’t feel any acidy burning sensation.  She wasn’t cold and snot-like either.  Instead she felt warm inside and the jellylike substance of her body pressed pleasantly against his erection.  A muscular swell of thicker jelly rolled down his shaft and sucked him deeper into her.

“Mmm, I love the feel of a big hard cock inside me,” Corybosom said.

She crossed her legs behind him.  The rest of her amorphous mass rolled forwards and partially engulfed his legs.  That felt pleasant as well, like dipping his legs in a warm mud bath.  Looking down it was weird to see his cock through her transparent skin.  He could see his foreskin move back and forth as her semi-liquid insides rippled up and down his shaft in gentle tugs.

It was another quirk of this strange game world.  In the back of his mind he could see a full status screen representing him, complete with stats and current level.  It had appeared the moment he’d woken up in this universe.

The damage was okay.  Battlefuck rules were the same as normal RPG combat, but with all the normal attacks replaced with sex acts.  Losing two HP was nothing.  He had plenty left.

Now it was time for his ‘attack’.

He powered his hips forwards with his buttocks.  Corybosom sighed in pleasure as his cock sank deeper into her gelatinous form.

Huh, wait.  That couldn’t be right.

“How come I took damage?” he said.  “I thought this was a sex battle.  You know, both of us taking it in turns to make a sex attack.”

Corybosom looked up at him and smiled.  Mischief glimmered in her eyes.

The malleable jelly of her body rippled up his cock in a teasing suck that left his knees feeling like they’d been replaced by overcooked spaghetti.

“. . . we may have been a teensy bit remiss in not correcting a tiny little misunderstanding.”

“This isn’t a battlefuck dungeon?”

Freddy had that just-fallen-into-a-yawning-pit sensation he’d just made a massive booboo.


If the scenario sounds familiar, yes, this is the same universe as Jackson in HRPG-World.  This one's a little lighter and more fun than my usual stories.  If you like the dark stuff, don't worry, there are plenty of darker tales on the way in the next collection coming out in a couple of weeks.  (oh, so much darkness . . .)

I hope you all find "Sandwiched by Slimes" to be worth a dollar of your hard-earned money.  Please tell me what you think in the comments below.  Do you like Corybosom and Rubisia and would you like to see more of them?

Next up it's tentacle time as a lucky someone gets "Sandwiched by Scyllas".  I'll try to get it out before the end of the month this time!
Posted by M.E. Hydra at 10:58