We’re back on the main quest line.  The objective is to investigate the Tartarus region close to the disappeared village of Esta.  But we can’t enter there just yet.  We need a permit from Queen Noah and before she gives us that she’d like us to first investigate her definitely-not-untrustworthy-in-the-slightest advisor, Mephisto.

Mephisto’s School of Magic can be found just north of Grand Noah here: 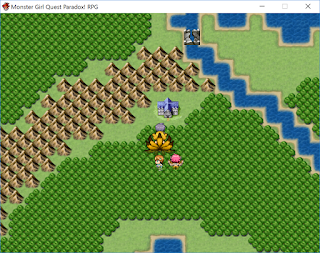 If you scouted out this region before entering Grand Noah, the school will have been locked.  But now we have the key given to us by Queen Noah.  So let’s go and see what nefarious activities Mephisto is up to.


(Who are really monster girl mature students of a legal age.  We don’t want to get into any trouble here.)

Welcome... to the School of Nope.

My notes have “get details of magical bug girls’ Bad Ends to add later.”

Really.  I mean, really.  Do you really want more of this:

At least on the second floor we have some magical elves, succubi and pixie girls that are little less nopey.

Most of the student NPCs are doing magical studenty things.  There is a battlefucker in the room furthest over to the left.  Her name is Rufa and she likes using toys.


She also has the correct number of limbs and no insect appendages burst out of her while doing the deed.  This counts as unexpected in this place.


She’s in disguise and also here to find out what’s going on with Mephisto.

Unsurprisingly, there are goings on with Mephisto.  She can be found in her office in the middle of the second floor.  She’s also not alone.  With her is the milfiest (and therefore sexiest) shikibus, Lilith.


So, Mephisto is working with the three succubus sisters.  After noticing us, Lilith can’t let us leave.  We’re going to have to wait a little longer for that Lilith fight, though, as Alma Elma shows up and both her and Lilith are spirited off for an epic battle elsewhere.

That still leaves Mephisto, and she promptly transforms into a giant demon lamia for the boss fight.


Mephisto’s attacks are mostly magical in nature.  I’m foolishly trying to level all the major characters up through the various jobs and don’t really have anything resembling an optimal party configuration.  The fight is pretty much Luka (still over-levelled because you can never remove him from the party) solo-spamming Demon Slicer over and over while the rest of the party tries to stay alive with phoenix feathers and priest magic.

Also, you probably don’t want to lose to Mephisto.  Her Bad End is another lamia unbirth scene, but with added cactus-spine fangs.

On the plus side, you could probably stream that segment on Youtube and it wouldn’t need to censor anything other than the boobies.

(If I remember right, there is an actual let’s play series of the original Monster Girl Quest.  They made use of a lot of meme-y and similar comedy cut outs to mask all the naughty bits.)

Mephisto fesses up after we beat her.  She is still working for Alice 15th rather than the ancient (likely dimension-hopping) succubus trio.  It just so happens that their interests are in alignment here.  She also reveals that Alice 15th, her boss, is the one pulling the strings behind Grangold and manipulating them into waging war on everyone.

We take her back to make the same confession to Queen Noah.


Queen Noah hears Mephisto’s confession in her throne room, but the weird part about it is that, despite working for Alice 15th, Mephisto was totally sincere in her role as advisor.  Alice 15th ordered her to help Grand Noah as much as she could, and she’s happy to continue doing this even if that means going against Grangold, who appear to also be following the orders of Alice 15th.

Queen Noah also points out it’s probably better to keep Mephisto close anyway, so they can see better what she’s up to.

The Queen is – finally – satisfied we’ve proven our worth.  She gives us a permit to join the investigative team at Esta and we can—

Mephisto asks if we can investigate Plansect Village.  A civil war has broken out between the plants and insects and the region is in unrest.  The village lies on the border and is therefore of strategic importance to Grand Noah.

Oh, for fuck’s sake.  We’re never going to get to see this next Tartarus region.