Violated Hero 5 is out and by popular demand (okay, a couple of people requested it) I’ll be doing another Let’s Play similar to what I did with Violated Hero 4.  Obviously this will be more of a ‘Text Play’ as anything I posted to youtube or twitch would last approximately a few nano-seconds before being yanked for dubious content. 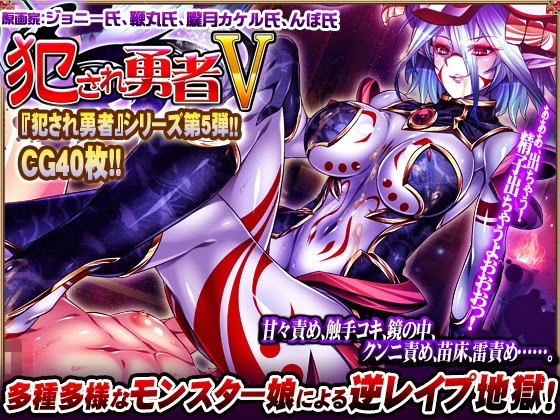 The Violated Hero franchise is a series of monster girl hentai games that followed the popularity of Monster Girl Quest.  The makers, Dieselmine, seem to have found a comfortable template and look intent on keeping to that until we all get bored.  Their main strengths are the production values—the artwork is frequently high quality and all the scenes are fully voiced.  Their main weaknesses are the game play—very bland JRPG mechanics with little depth.  Fortunately we’re not here for the game play.  The main appeal (to me anyway) is to see what bonkers craziness their monster girl characters get up to in the H scenes.

With the boring disclaimers out of the way let’s start the game up. 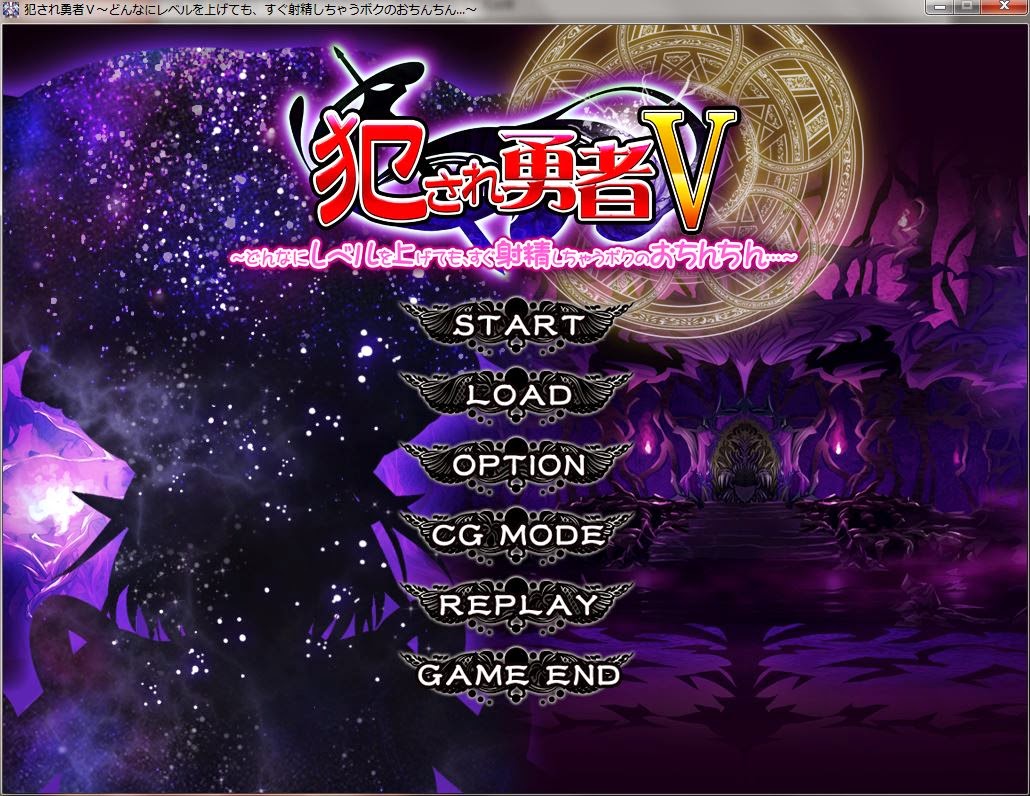 Also boring, the title screen.  No sexy big-boobed monster girls on show and the demon throne room looks like the same artwork from the last game.

Onto the introduction.  The previous settings have been generic fantasy worlds with VH3’s feudal East Asia setting being the best.  This time around we’re into higher fantasy as there’s not one world but ten, each ruled over by a different monster girl boss.  Previous Violated Hero games have broken down into ten sub-boss monster girls and five more prominent monster characters that act as recurring characters.  I’m curious to see how this one will work as the boss of the 10th world looks like one of the more prominent characters rather than a sub-boss from the silhouette. 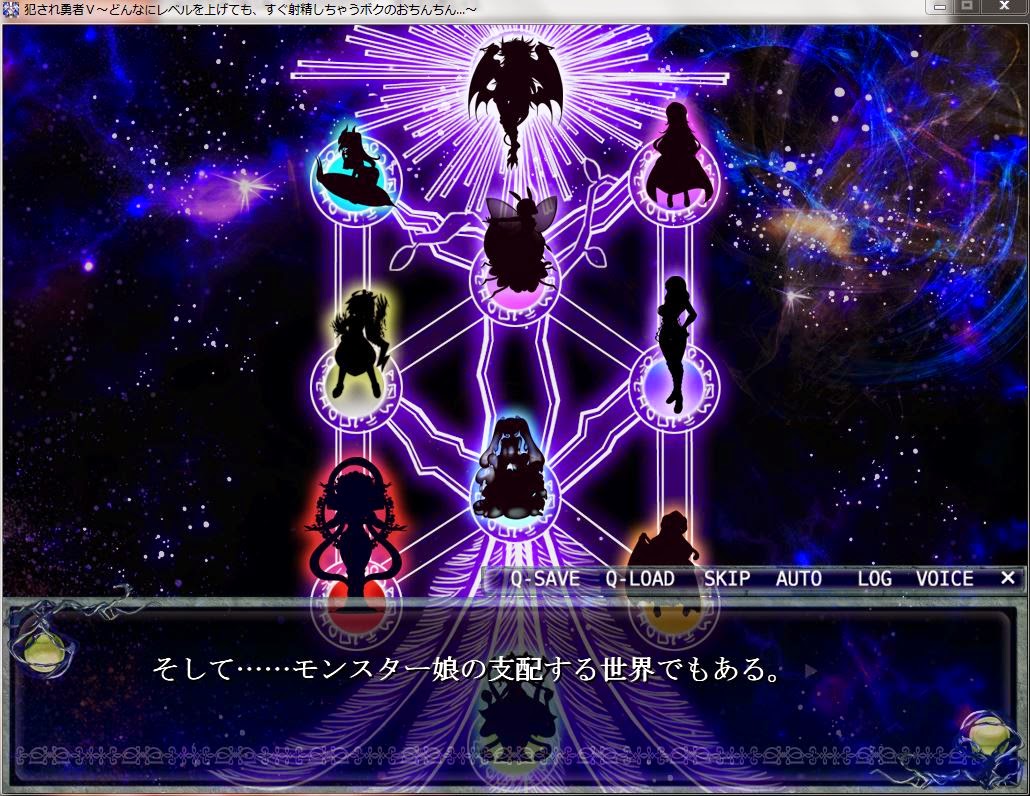 We start on the bottommost world, which appears to have a plant theme. 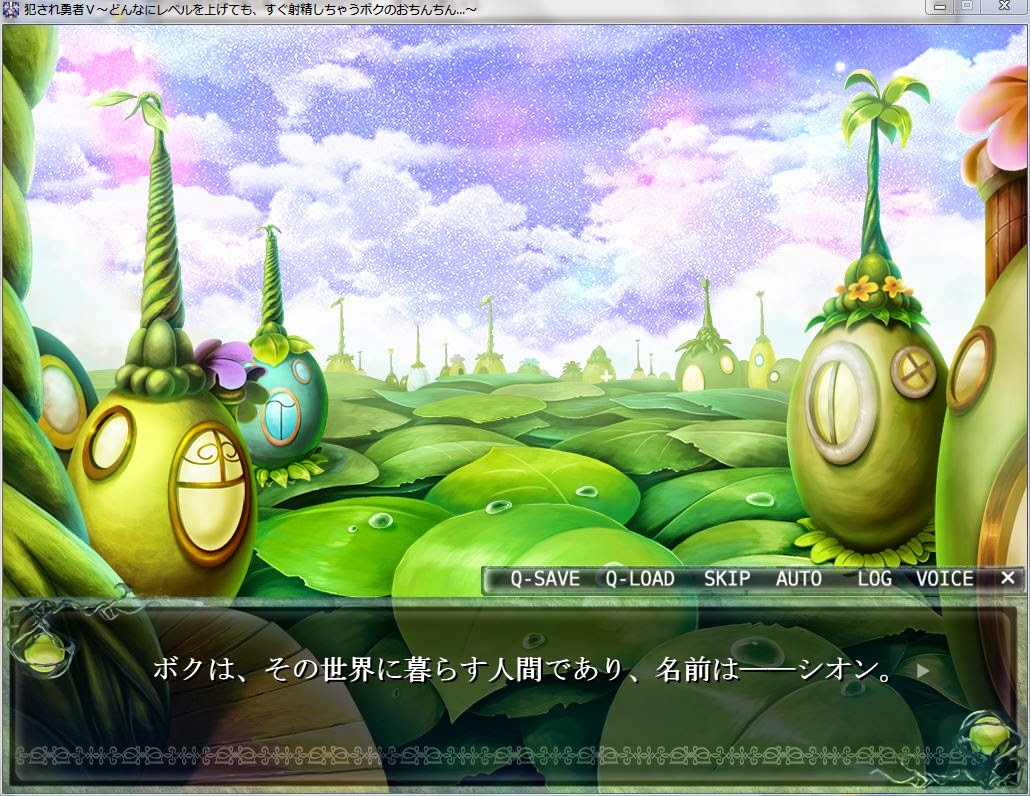 Ooh, nice artwork.  Very pretty.  That’s always been a strength of this series.

The hero’s name is Sion, but we’re going to call him Luka-clone the 5th because there are protocols to observe.  He’s hanging around treetop Hobbiton being gormless and pining for the heroic life when an angel called Ariel flies down and asks him to liberate the humans from their evil molesting monster girl overlords (what about the humans that like being sexually molested by super-sexy big-boobed monster girls, huh?). 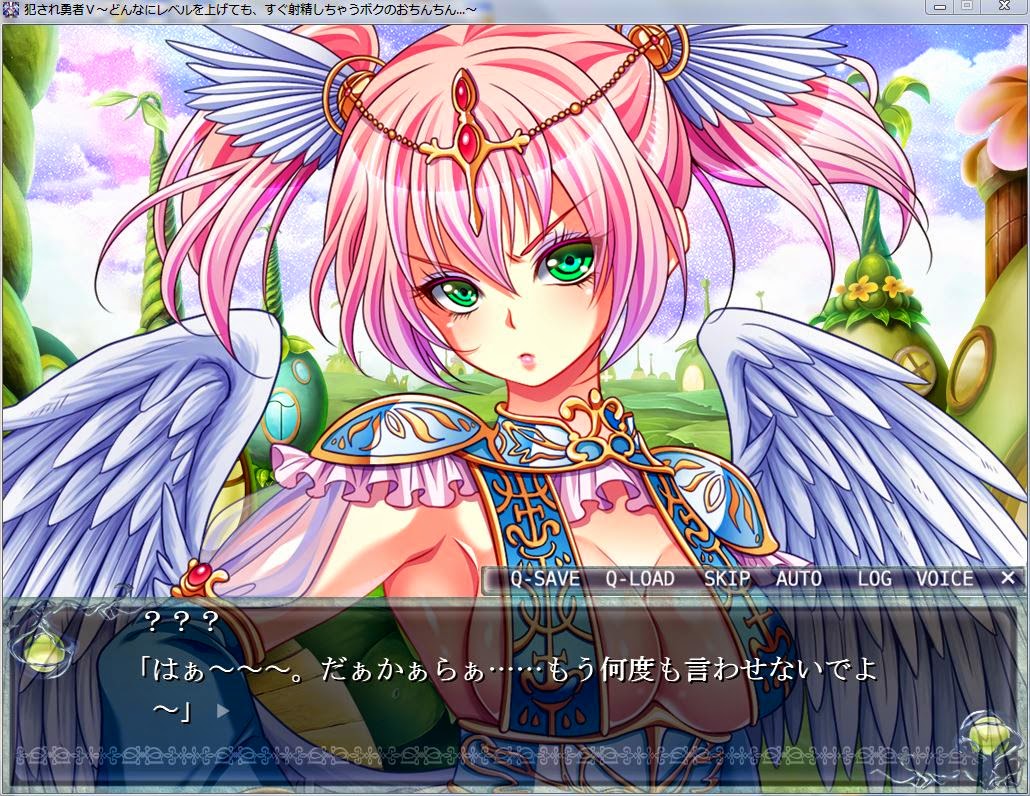 I wouldn’t trust her, Luka-clone.  She’s an angel and angels are always evil in JRPGs.

Luka-clone asks her why he was picked out to be the chosen one to go fight the naughty (oh so naughty) monster girls.  Is it because she spotted the latent spark of heroism burning within him? 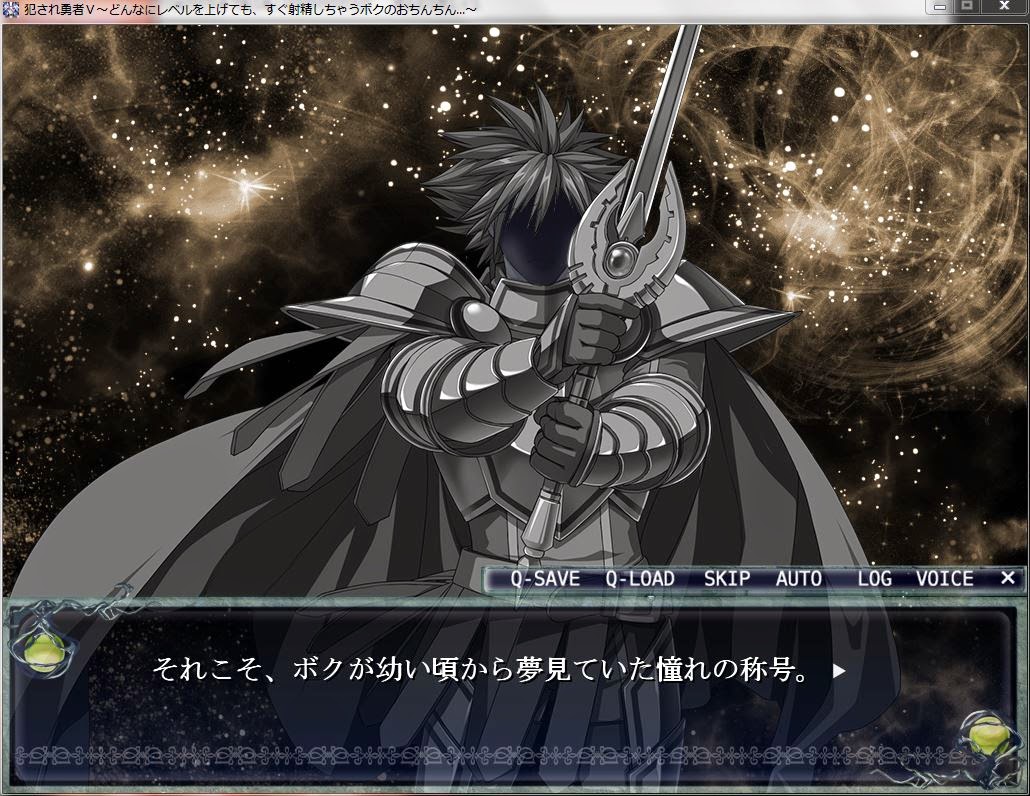 (I think she picked us out at random).

She gets very enthusiastic and then berates Luka-clone for not being enthusiastic about marching off to certain horrible death.  She sounds like an over-excitable Japanese game show host shouting Banzai! before pushing a hapless contestant into an embarrassing torture device masquerading as an assault course.

Of course this could also be what passes for entertainment in monster girl land—pick out some gormless lad and throw him straight into the naughty tentacles of the nearest abomination for shit’n’giggles.  In which case I applaud your style, Ms Ariel.

Before we get going, here’s a little guide to help if you want to play along.

The game is in Japanese.  If we’re really lucky someone might make an English translation, but as the past translator of Violated Hero games, Dargoth, is currently buried in Sei Monmusu Gakuen, this might be a long wait.  I use AGTH as a text hooker with Translation Aggregator for the translating.  For more information, this forum on hongfire is very helpful.  Unfortunately Google translate appears to have blocked Translation Aggregator (would appreciate it if anyone knows a fix for this), so we can expect the machine translations to be even more erratic than normal.  Maybe I’ve used TA with dubious hentai games so often now Google has my IP tagged as a blackspot of utter depravity and must block me to preserve the sanity of their monitoring systems.

The game mechanics will be very familiar to anyone who’s played the previous two games.

Current world is displayed on the world map.  They all look themed with forest being the first theme. 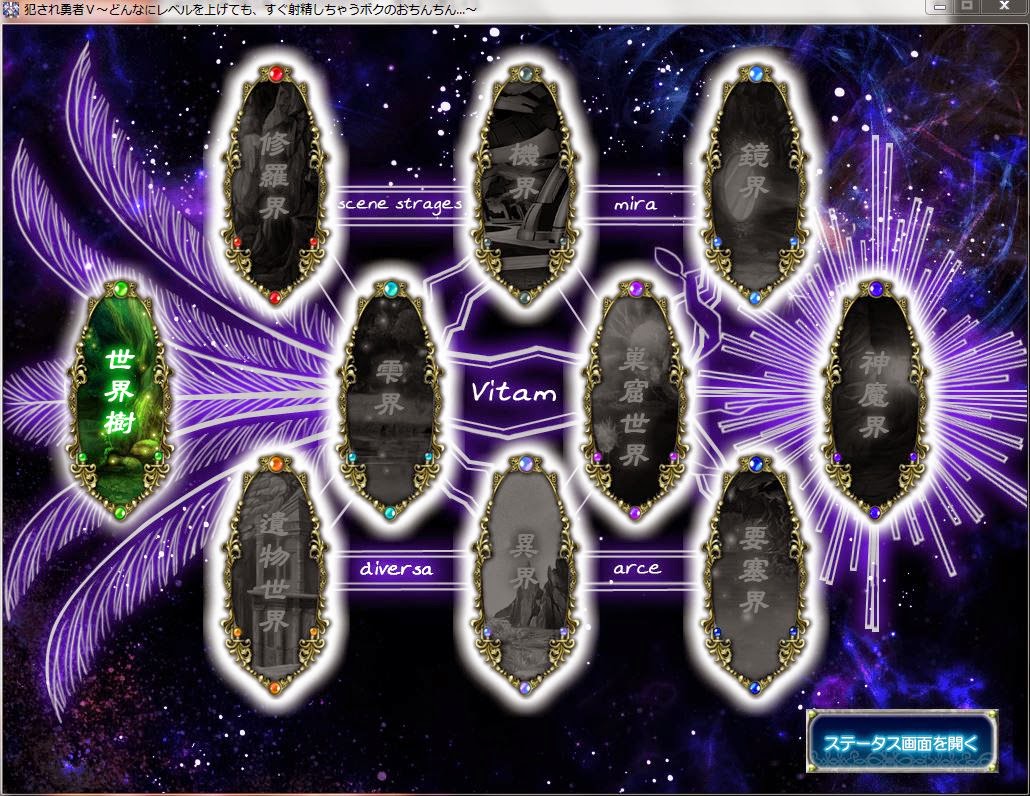 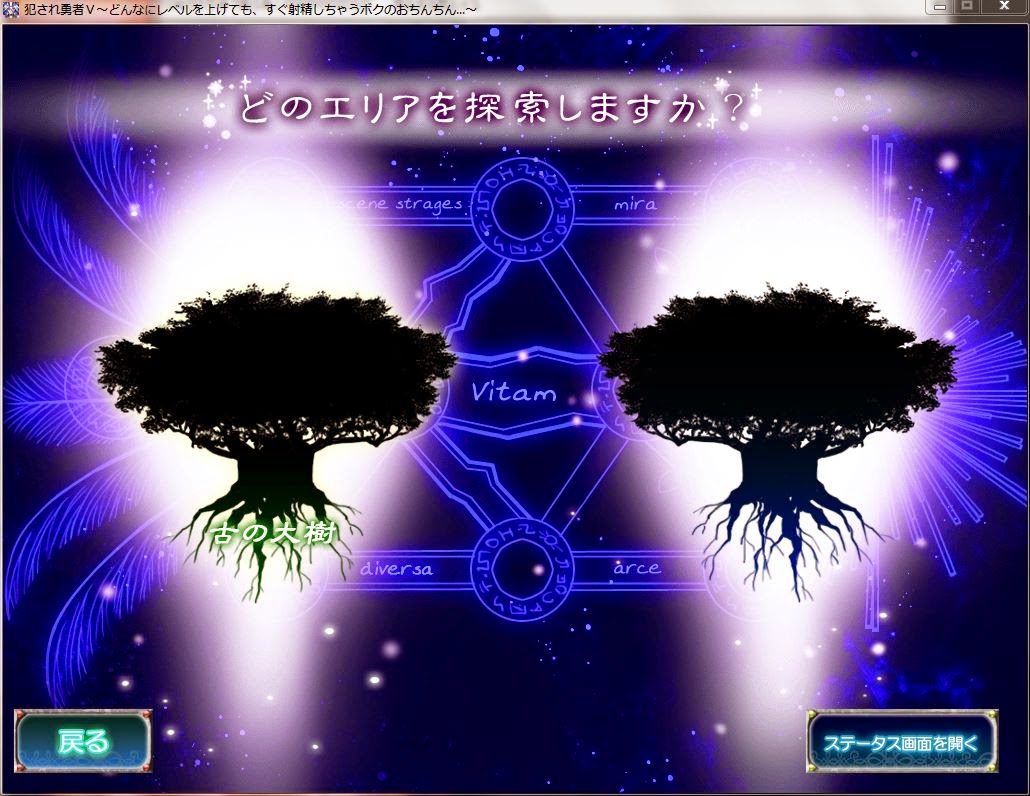 Each location consists of a short branching path. 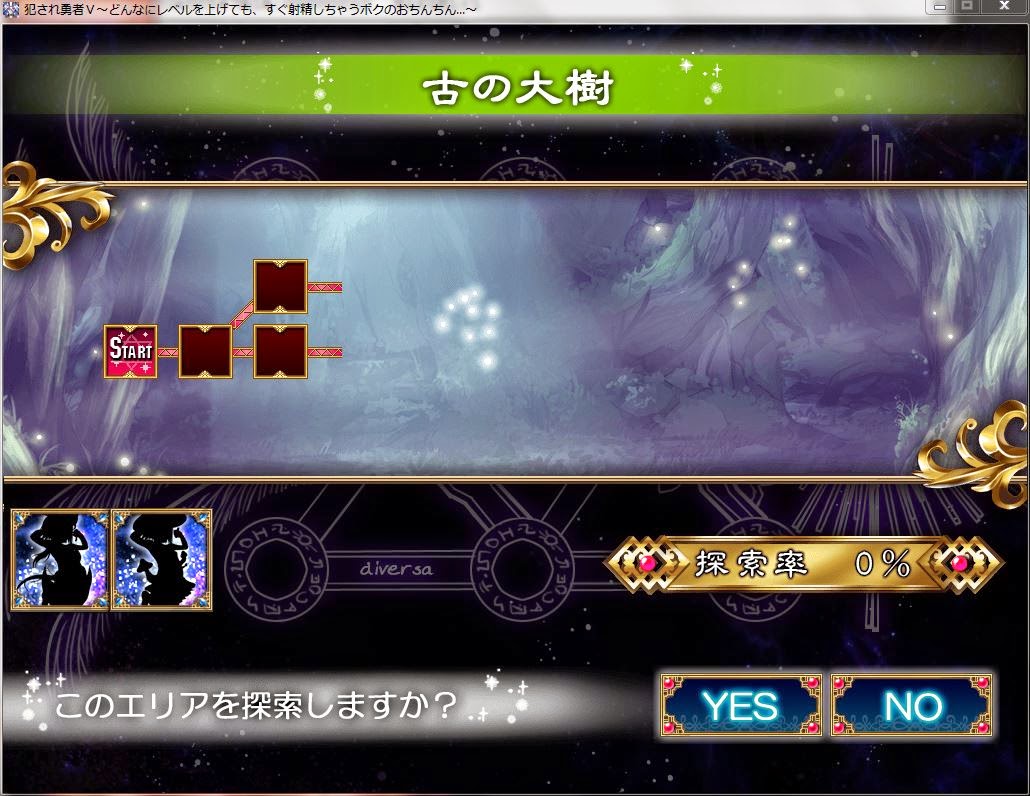 We navigate it through this pseudo-3D screen (like Etrian Odyssey but with less maziness).  The box on the top left is our stats – HP, MP and how much XP to next level.  Arrows in the centre of the screen indicate direction choices. 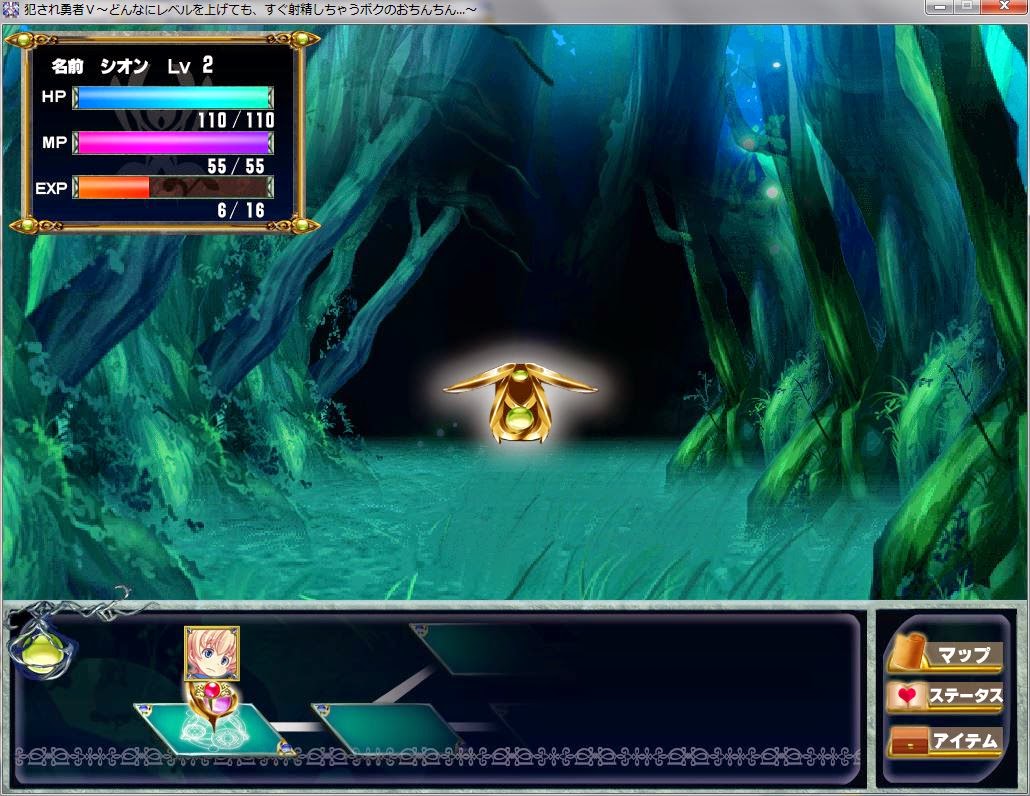 The options on the bottom left are:

Map.  The bits we’ve explored and where we are (the levels aren’t very complicated—three trips is normally enough to step on every square.) 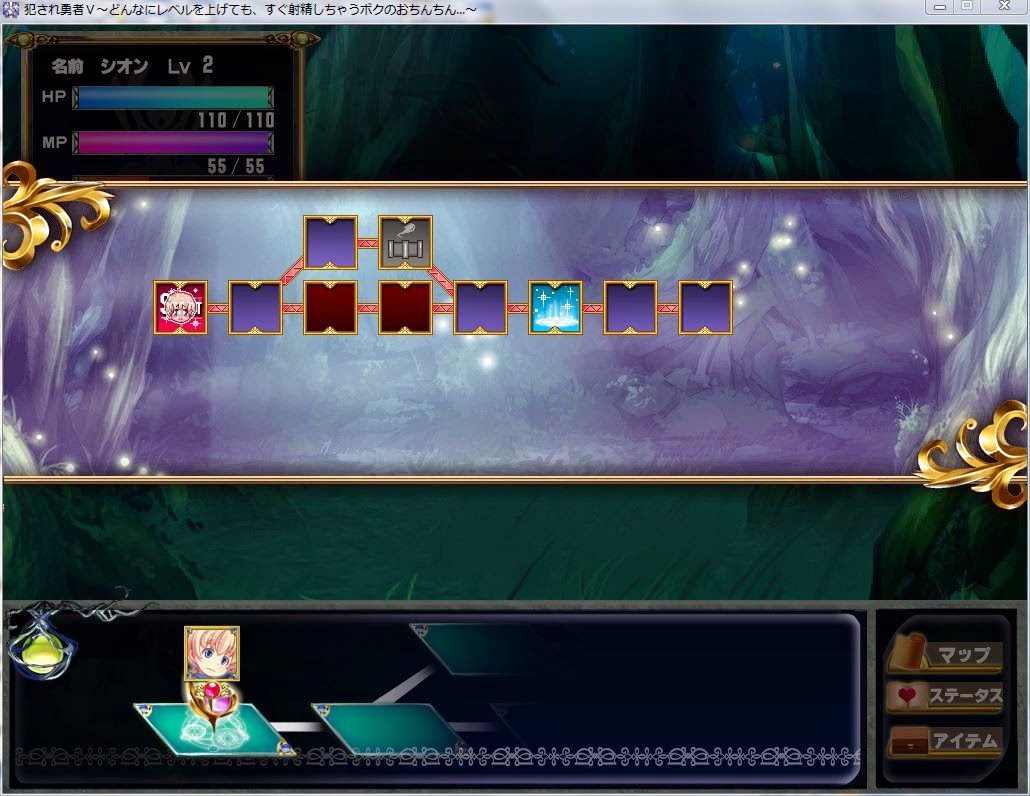 The status screen.  This breaks down to: 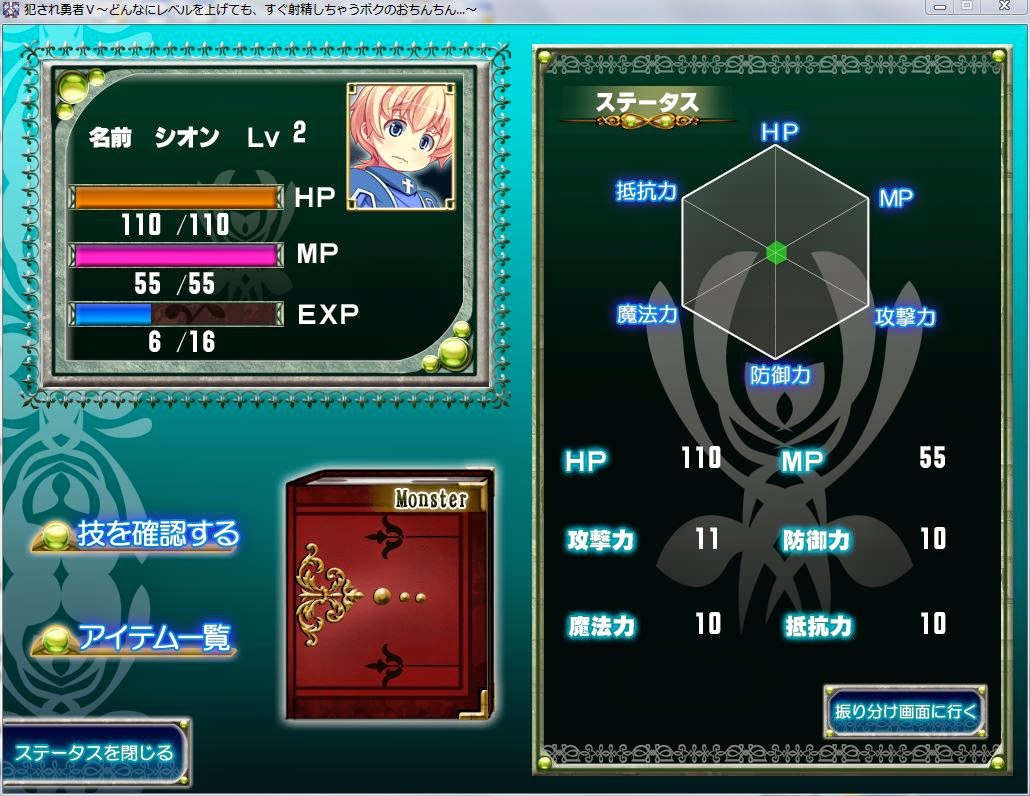 Our stats.  They correspond to HP, MP, Normal Attack, Normal Defence, Magic Attack, Magic Defence.  I don’t know which is which, but after a disastrous playthrough of VH3 that saw Luka-clone’s adventure cut short by placing all his eggs in the basket marked magic and then running headfirst into a boss with ridiculous magic defence, I’ll be spreading the points around evenly this time. 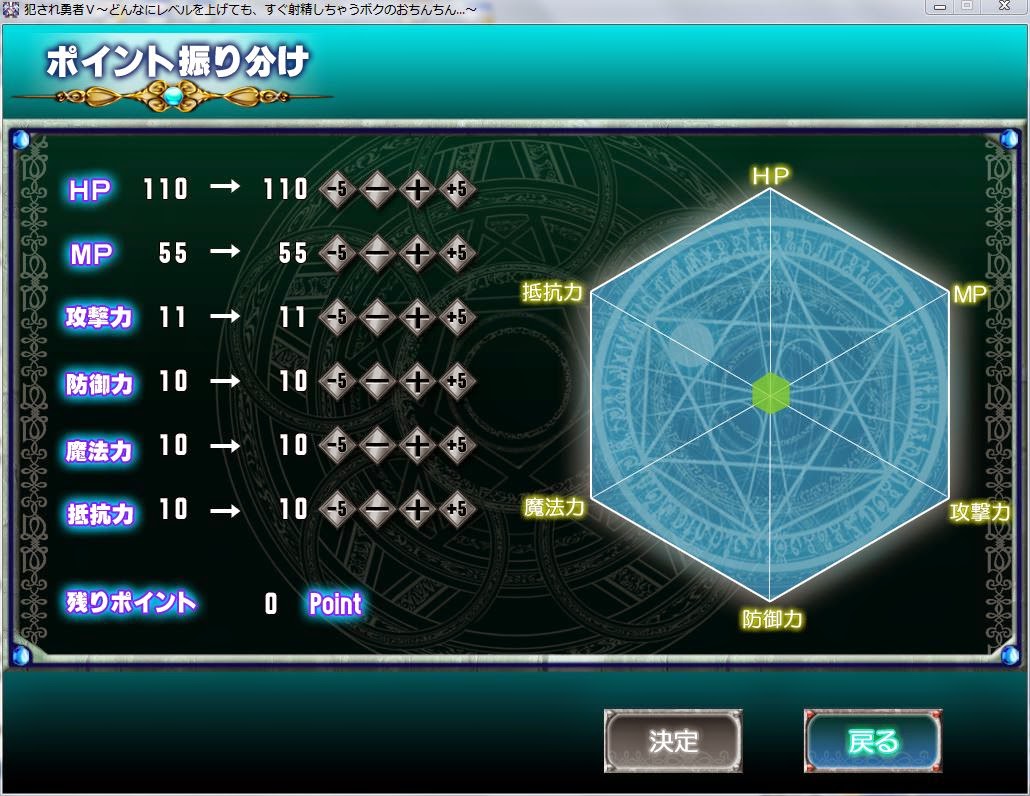 On the left hand side of the book are two options.  The top one currently leads to a blank screen, so I suspect that is for any special attacks I might pick up later.  The one below is the item screen.

Items have different icons this time around.  I still have no idea what they do other than the basic healing potions. 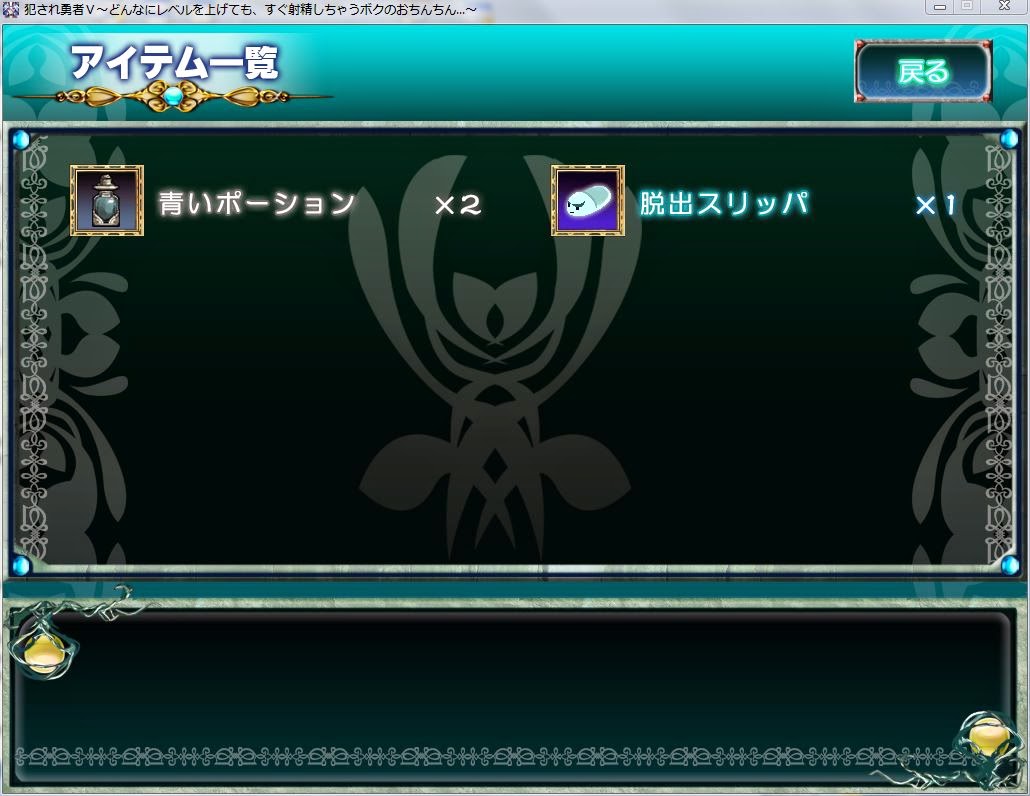 The book is a monsterpedia of defeated enemies. 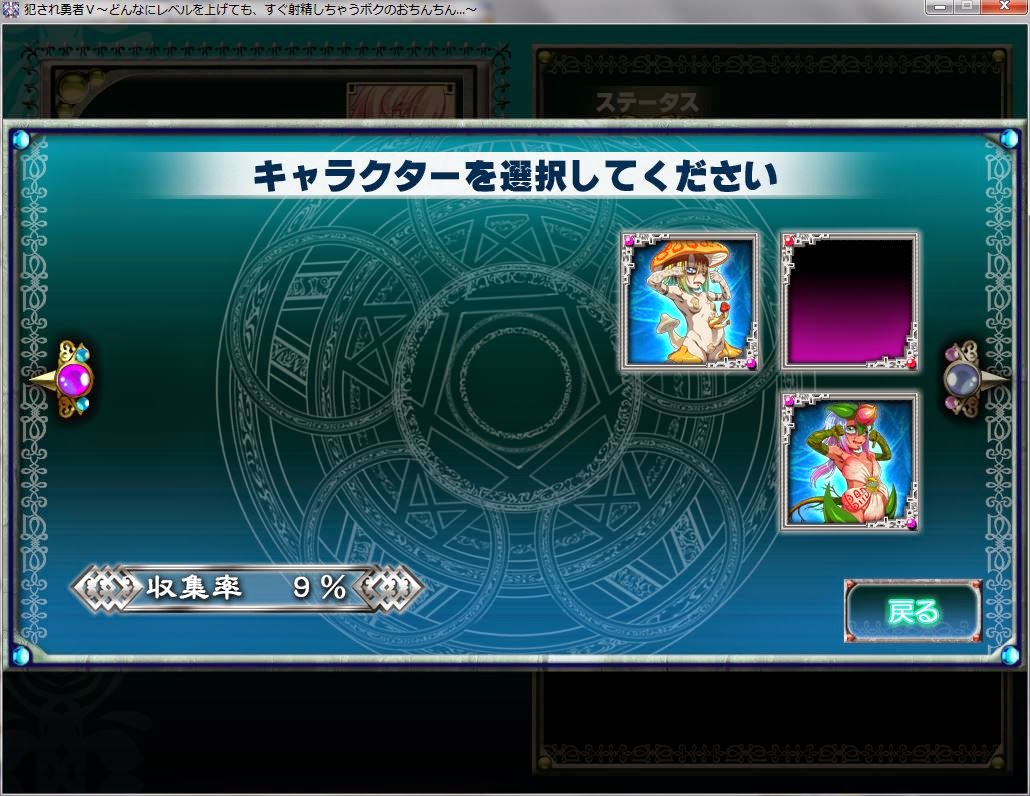 Here you can go and perv over past conquests. 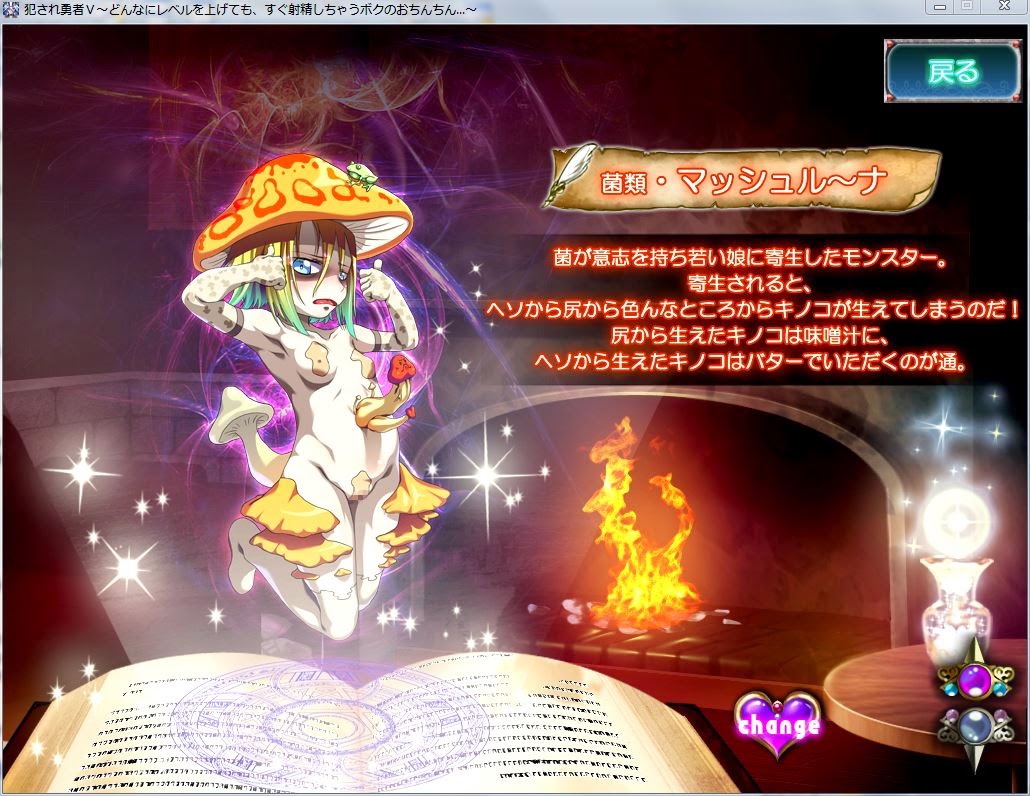 Back to the navigation screen and the 3rd option on the bottom right leads us to the same item screen we saw earlier.

Okay, that’s a rough guide on how to battle through the game with zero Japanese reading comprehension.  Part 2 is here.
Posted by M.E. Hydra at 05:19