The Lost Woods/Woods of Perplexity and a Beach

Three weeks in and probably not even halfway through, this is the continuation of the Monmusu Quest: Paradox playthrough I began back here.

After the horrors of Tartarus yesterday it's time to get back to the surface and play with far less frightening fairies and pervy elves.  We should now be high enough level to enter the forbidden/lost woods to the west of Iliasville.

There are three entrances to the woods and it's treated as a dungeon-type location rather than the open-world map.

There are four monster girl types in the woods and nothing new.  The pumpkin fairy comes back in a new location.  Joining her are the succubus flower fairies from MGQ's first chapter.  They're appearing out of sequence as last time they showed up in the same forest as Slyph on the next continent.  The other two monster girls are the dark elf fencer and dark elf summoner that guarded Enrika in the original game.

MGQ-verse elves are elves that given over wholly to their pervy side and fallen to depravity.  They're kind of like how we'd wish other fantasy worlds' Dark Elves would be if all that fetish fuel armour didn't come with a dollop of bloodthirsty sadism. 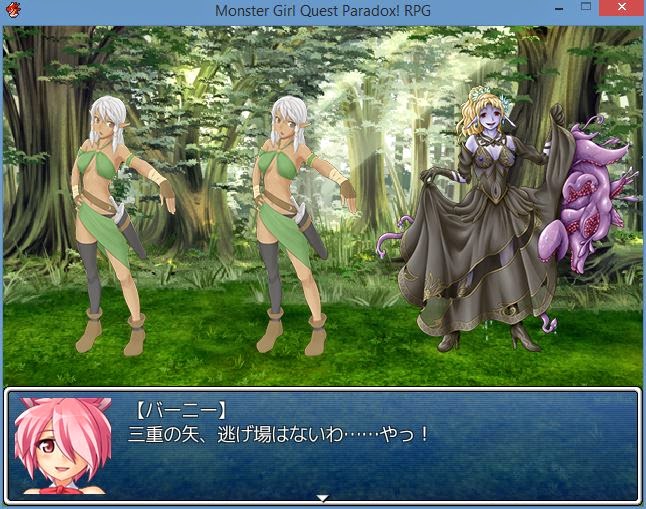 Unfortunately, because of their fallen-into-depravity natures, fucking them results in either having your soul yanked out or all your juices slurped up by their little tentacled pets.

I didn't see anything new here.  Like roper, dark elf summoner's two request scenes back in the castle only vary in that she lets her little pet drain you to death in the 10-happiness scene (remember what I said – always remember to feed your bad girls plenty of meat). 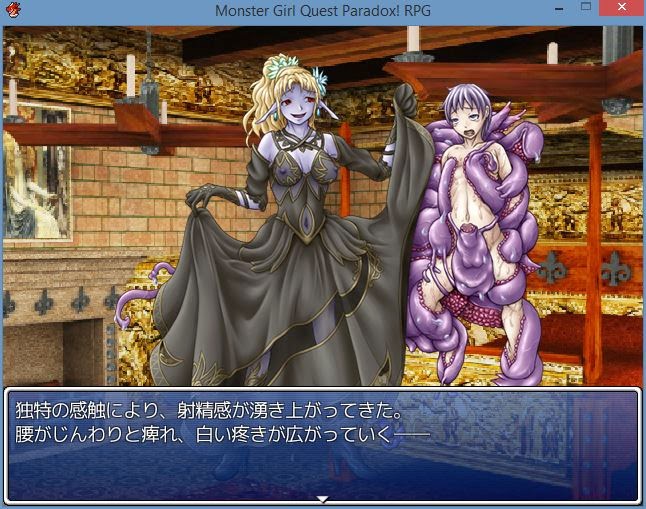 There are two exits from the woods.  The one to the east leads to Enrika.  The one in the south goes to the beach.

Let's go to the beach! 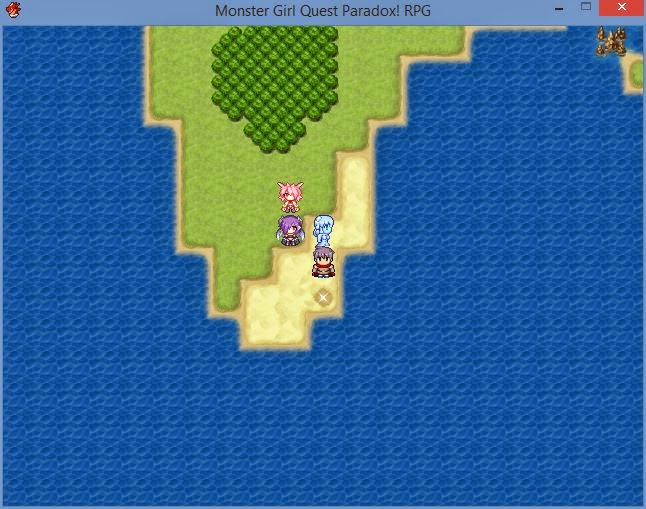 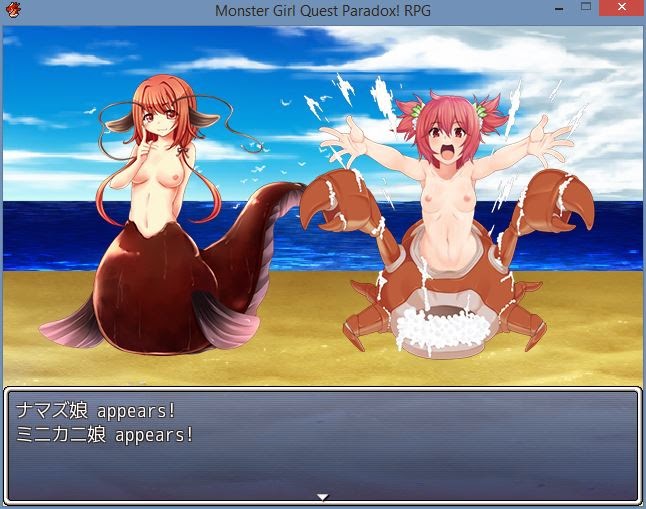 Mini-crab girl looks and acts like she was raised in a rock pool filled with Red Bull.  Like her bigger sister from the original series, her Bad End involves pinning Luka to the floor and giving his cock a good washing with plenty of foamy bubbles. 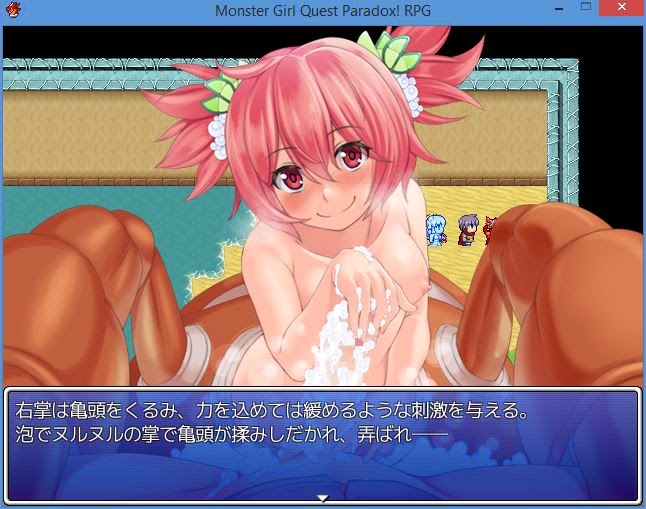 Catfish girl wedges Luka's cock between her boobies and gives it a good suck. 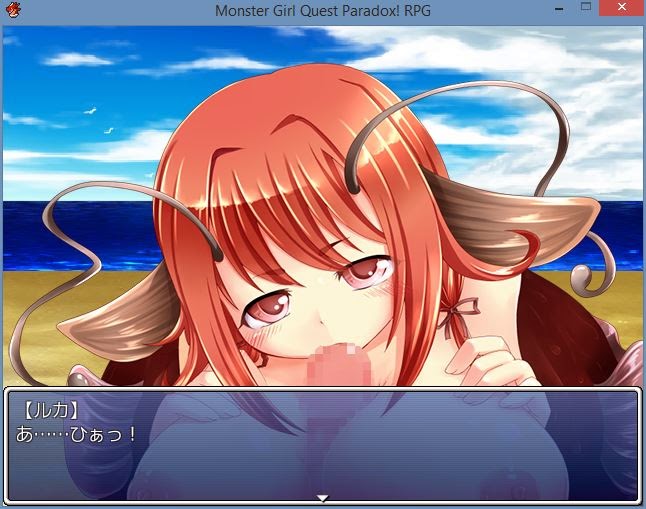 At this point Lime has developed to be a little scary.  After she maxed out Slime I switched her to the Carnivorous Slime race.  Now she has the ability to gloop enemies in digestive juices and – once they've been glooped – gulp them down whole.  You might want to cut out those Slime Heaven sessions back in the castle, Luka.  Your bits might melt off.

Oddly, glooping victims in digestive acid counts as a pleasure attack.  Enemies come when defeated.  This sort of makes sense as the MGQ-verse as a whole leans heavily on the vore fetish, but still seems weird.

Says the person who's written their fair share of vore stories.

The unfortunate mermaid can be recruited here if you have Amira in the party (though it would probably be kinder to toss her back into the sea).

There's also a special healing shell that can be found here. 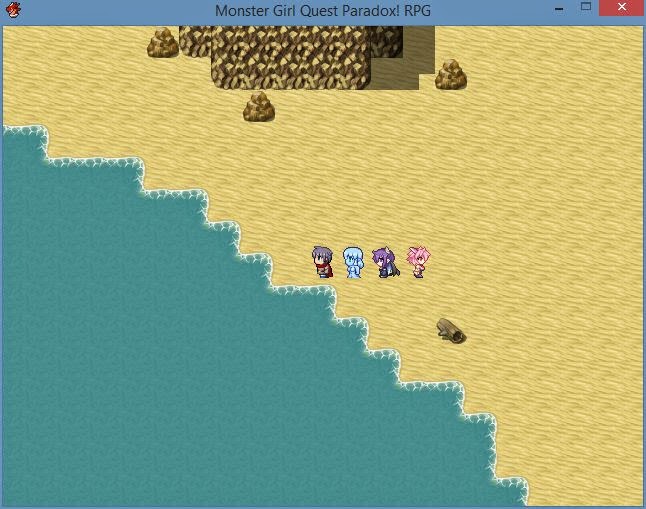 Or rather it was there.  I picked it up before I remembered to take the screenshot.  The guide I have tells me you're supposed to give it to an elf in Enrika.

Which we'll be taking a look at… tomorrow.