It's time to head off to the Forest of Spirits to find and recruit the first of the elemental spirits – Sylph.  This is close to a direct re-run of the original series.  The monsters are also the same.  There are: 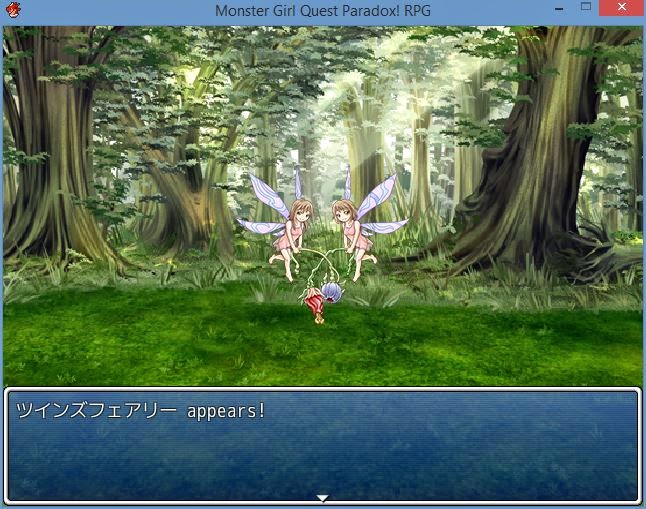 Assorted fairies.  There are six of these and they attack in various combinations of three.  When recruited all six are counted as a single character.  This is the same as how it was with the zombies in Chrome's mansion.  I suspect UN_DO's lamias in the Sphinx's pyramid and the slime girls in Undine's fountain will likely be treated the same way. 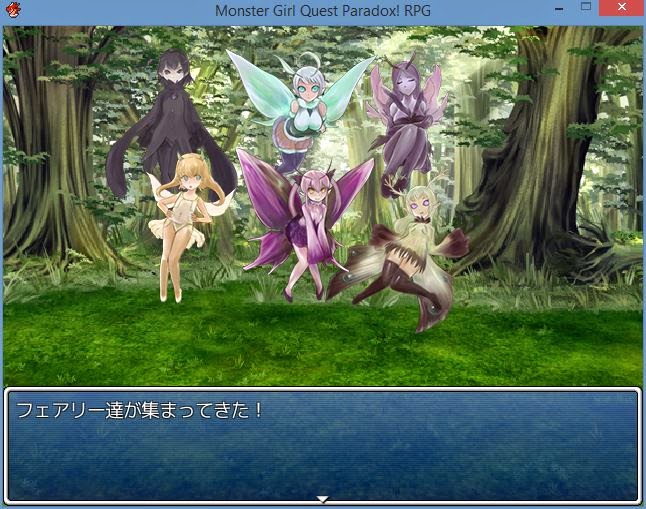 For the brownies, because there are two of them they get two attacks.  The same is true for the twin fairies.  Because of this it's possible to get some annoying fights where the opponents have more attacks than Luka's party.

Fairies do have a minimise magic spell, but as the negative status wears off at the end of combat it's not something to worry about.  My party at the time was heavy on pyromaniac magicians, and shrinking them didn't seem to affect the boominess of their spells at all. 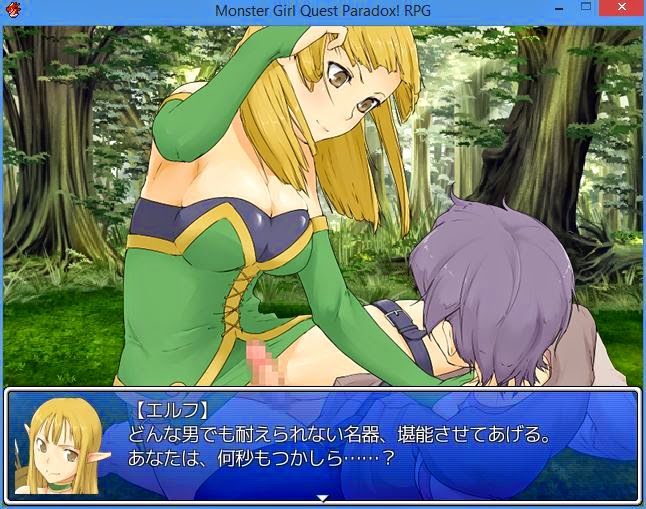 I wish they'd done it like this for more of the monster girls.  Most of the time the art change, if any, seems to come after selecting 'Please do naughty things to me.'

NPC fairies hint about a scary monster wandering the woods.  That was Chimera Dryad in the first series.  It's hard to see how it could be in Paradox as Promestein, the mystery figure from the first MGQ chapter, is on our side (maybe) this time.

Sylph is at the end of the forest, up in the north.  She's fun and playful, but we still have to fight her to prove our worth in wielding her. 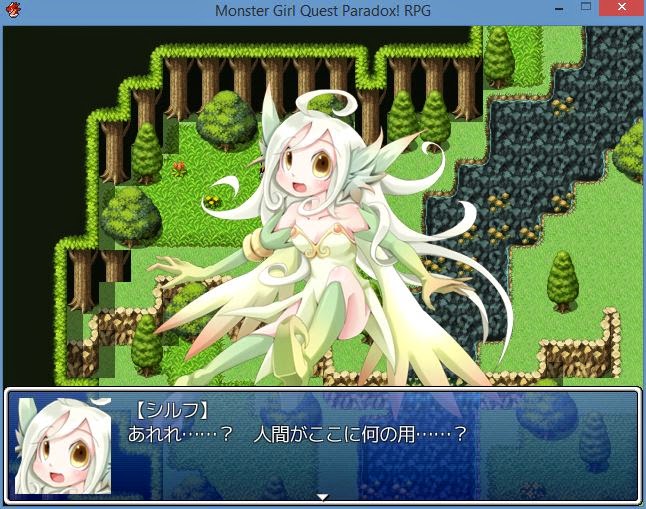 The fight is straightforward enough (I had both Remi and Rami in the party, and imps are resistant to wind magic).

Right, we're about to go into spoilerific territory again.  If you'd rather wait to be surprised when playing the game yourself, I'd skip the following section and rejoin us tomorrow.

The walkthrough I've been following has some ominous lines for this part of the story.

The music goes ominous and a mystery sprite shows up.  Given the walkthrough comments I wonder if the game is going to punk us and have it turn out to be stupid and non-threatening. 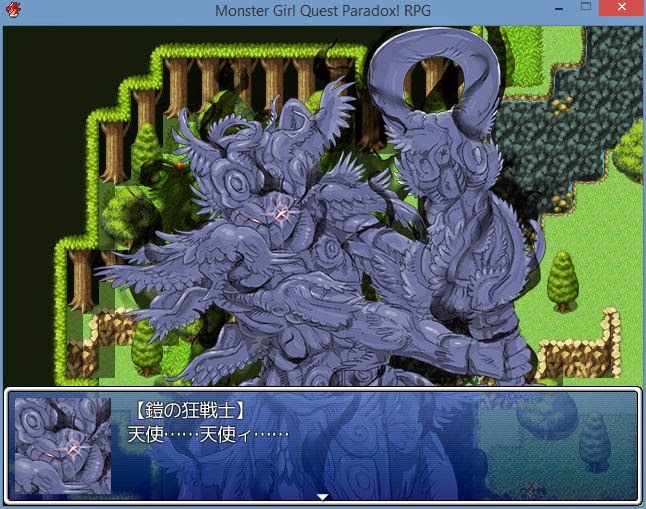 It's some kind of berserker armour.  It screams 'Angel!' a lot.  And then 'Extinction!'  Then it attacks with a cool battle theme.

It's another hopeless boss fight.  The berserker armour wipes the floor with us in next to no time.  It's about to follow-through and finish us off for good when Nero steps in.

He's not alone.  Alice the 17th is there as well.  She asks if Luka and his party are okay and whether she can leave the crazy armour to elder brother. 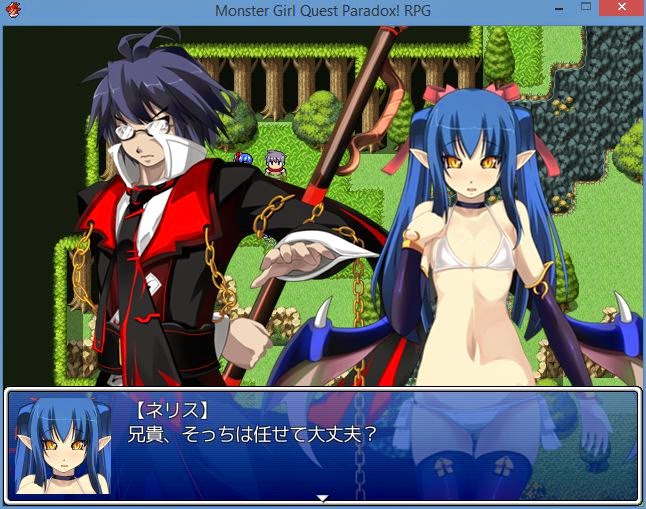 If Alice the 17th is Luka's daughter from the original MGQ-verse then this is a pretty strong implication Nero is Luka's son.  This is in keeping with the end of MGQ, where Alice was expecting twins – one a human boy, the other a demon girl.

Alice (17th) spirits the party to safety while Nero hangs around to fight the armour.  Nero looks pretty badass. 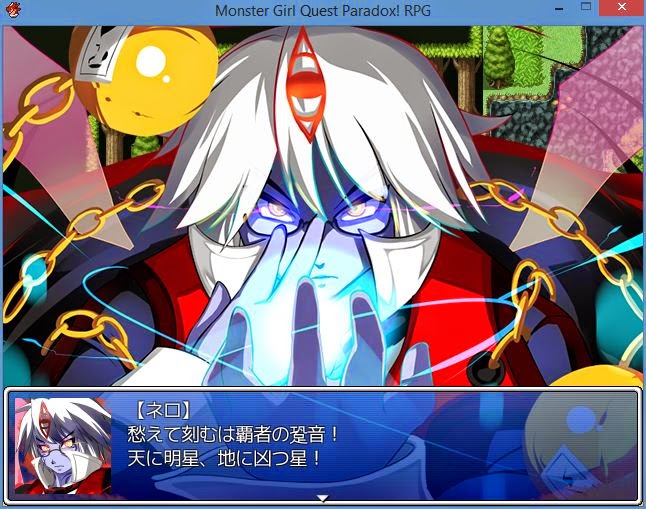 Yep, ridiculously badass.  We get to control him for the fight and he's about a level bazillion and something.  So many options.  I get him to throw comets at the berserker armour.  I remember that being good in Final Fantasy 7.

It's a shame the artwork for the armour is a bit iffy.  I can see it's trying to draw on the same melted-angel weirdness as Luka's sword from the original series.  The colours and contrast don't really work.

Berserker armour takes a lot of comets to the face before going down.

Then it's time for more cutscene. 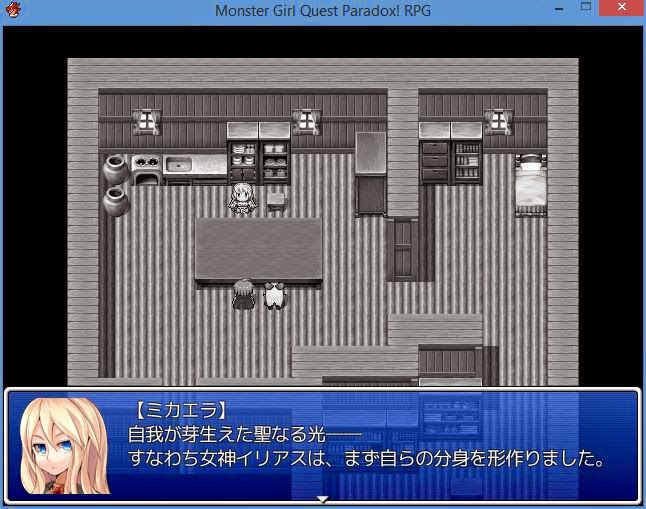 This time I think we're in the parallel world.  Their Micaela is explaining to Luka and Alice the origins of both the world and Luka.  Ilias and the first monster lord were created out of opposing light and dark elements.  Luka's mother was an angel.  She was engaged in the first revolt against Ilias and fled to live as a mortal on the world below.  She fell in love with Marcellus, Luka's father, and the rest – as they say – is history.

In the parallel MGQ-world anyway.  This world's Micaela has already met an untimely end.  Luka's dreams reveal the truth and he wakes up with the realisation of his not-quite-human lineage.  This causes an in-game change as it opens up the Lowly Angel race for him.

Sylph reminds him she's in Luka's head.  And is also outside in the castle grounds.  I still haven't figured out how the elemental spirits work in Paradox.  I'll have to look at Luka's skill menu a little closer.

I'm not sure what the walkthrough guide found facepalm-worthy about the cutscene.  The awkwardness of the dream revelation of Luka's half-angel nature, maybe?

Anyway, Alice comes in and suggests it's time to head for Sabasa.  As it's a long distance away across deserts, wastelands and mountains she suggests we go to Monte Carlo first.

Ah, we might have done things a little out of sequence here, given we've already done the Monte Carlo quests.  Oh well, let's press on further westwards… tomorrow.
Posted by M.E. Hydra at 11:00