It's part 25 of the Monmusu Quest: Paradox walkthrough and we've finally reached a new continent.  The first part is back here and the last part will likely be posted some time in 2020 at this rate.

Yesterday we ran into the first of the ancient trio of succubi, Morrigan.  She got into a fight with a mysterious angel and we ended up being rescued by mermaids.  Our first introduction to Natalia Port is waking up in a mermaid's bed (not with the mermaid herself, sadly).

There are two mermaids in the house and they're also the source of our first quest on the Sentora continent.  Things are not okay in Natalia Port.  Mermaids and Fishermen have gone missing.

This is a little different.  Last time around Natalia Port was largely content apart from the odd loony terrorist going around blowing up pubs.  Luka's quest was to go visit the Queen of the South Sea Temple to ask her to bless a marriage for a mermaid, Meia, and her husband-to-be.  And that was only really dangerous because the monster girls on the way were all predatory types that wanted to eat him, and the Queen, Kraken, was dim-witted enough to think he was trying to steal her treasure.  Now there's mass disappearances and everyone's nervous.  Meia isn't even here.  Her door is locked and there's a note on it indicating she was the first to go missing.

If you've recruited them, various monster girl characters are roaming around the town.  This is one aspect of Paradox I've really liked.  Even the lesser characters all have stuff to do.  In Natalia Port there are a few additional spots other than the usual Hips (the Orc) and Amira sightings.  The two kitsune are looking out over the sea and wondering how it got so big.  Mary the sheep is getting drunk in the pub and has to be dragged out by Barnny the rabbit.  There's also a scene with Bunni, the slime girl that thinks she's a rabbit.  She can be found eating some discarded carrots.  Promestein comes along and injects her with something.  This has repercussions in the game as Bunni goes from being a Slime that can learn some Beast skills to being full dual race (unfortunately neither of those two races is particularly strong, but it might present some useful combinations when we get to the intermediate level races). 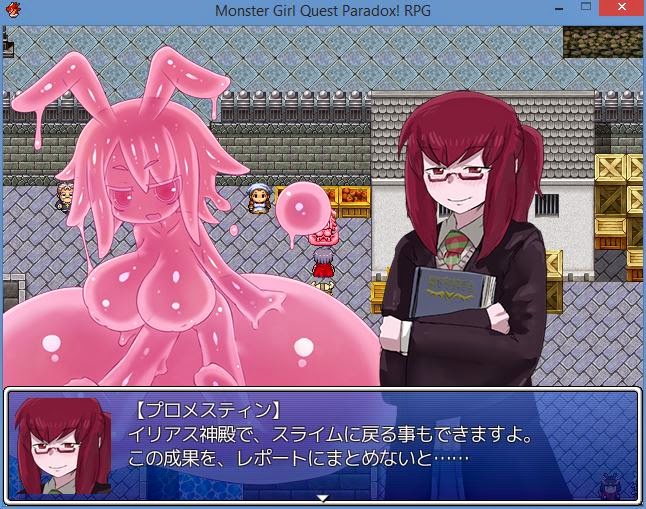 There's also a bit more lore of the MGQ-verse revealed.  The scylla by the docks really hates lamia and is very eager to tell you about their weaknesses to cold.  This is also alluded to in the level-up progression of both races.  Lamias get the Tentacle Killer ability while scyllas get the Snake Strangle and Lamia Slayer abilities, implying both races don't share a lot of love for each other.

There's also a battle-fucker up by the north-east exit from Natalia Port.  As usual you can recognise her house by the knackered dudes sprawled outside the door. 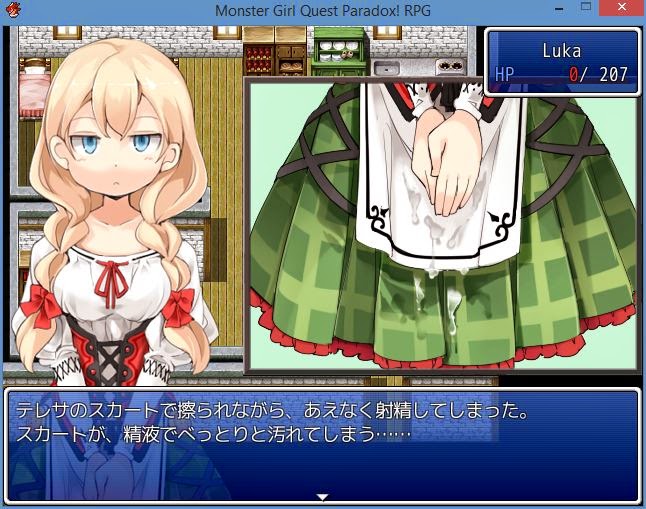 Outlast her technique and you can earn a Priest scroll.

Once outside of Natalia Port and the game opens up a great deal.  It's a whole new continent with a lot of new wandering monsters.  Up until now I'd been a little frustrated with the slow progress.  This was the point where I could go whoo-hoo! and go charging around to see how many new monster girls had been added.  I got fairly far as well.  By running away from every encounter I was able to make it all the way to the deserts in the west before being eaten (literally, it's MGQ) by one of the djinn girls.  I'm not sure this is the best way to go about things as it does spoiler the inhabitants of the new locations.  What can I say, I'm impatient.

Instead of going through a big list of all the over-map wandering monster girls, I'll ration them out for posts set in the same area.  For the next quest there's no need to step on the green bits of map anyway.

Our next destination, the South Sea Temple is a sparkly bit of beach on the world map to the west of Natalia Port.  Entering this takes us to another of those outdoor dungeon type areas.  On the shore right in front of us is another sparkly patch that leads to the temple itself.  Before going there it's worth investigating this area and grabbing all the swag in the chests (and occasionally getting eaten by a mimic, because they're here as well).

By now the game has a pattern.  Areas brand new to Paradox get new monsters.  Areas repeated from MGQ get repeated monster girls.  I'm not sure there's any way to avoid this as each section of MGQ often had three encounters in sequence and three to four is probably the right number of encounter types for each area.  On the beach we get the appropriately themed crab girl, sea cucumber girl and shellfish girl. 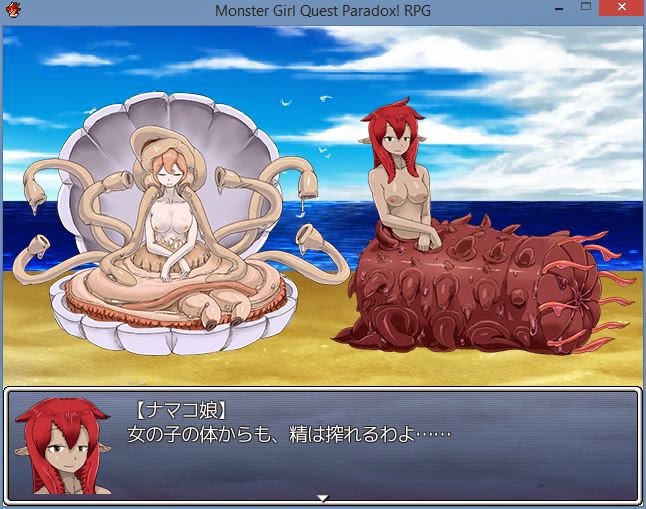 The crab girl wants to wash us, the sea cucumber girl wants to be a nice comfy sleeping bag for us, and the shellfish girl wants to stick her tongue in parts of our anatomy where the sun don't shine. 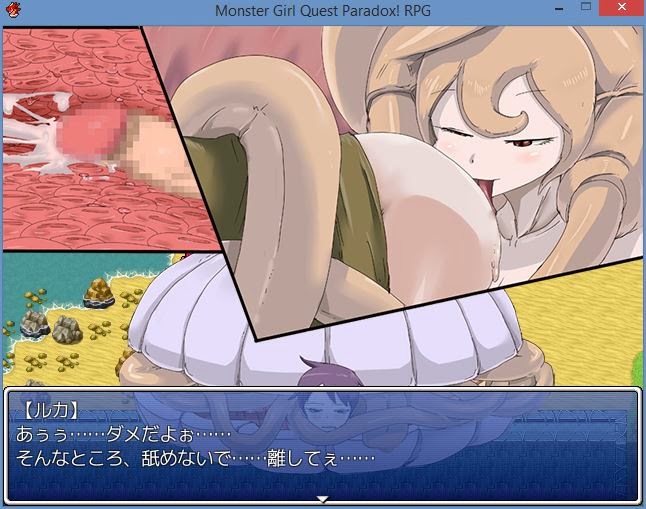 There is a brand new monster girl – seaweed girl – but as she's also present in the next section as well I'll talk about her tomorrow when we head off into the depths of the South Sea Temple.
Posted by M.E. Hydra at 10:30