Iliasport (for definite this time!)

Welcome to part 22 of my playthrough of Monmusu Quest: Paradox (which started here).  The posting should be on autopilot while I'm off doing other things.

Okay, so we're finally going to enter Iliasport, grab a boat, and move onto the next continent.

No boats going anywhere.  Unnatural storms preventing anyone from travelling to the Sentora continent.

Oh yeah, this happened last time as well.  In the original MGQ series the source of the storms was Alma Elma and Luka had to find something called Neptune's (Poseidon's?) Bell to negate them.  This was supposedly hidden in a grotto not far from Iliasport as part of a legendary pirate's treasure.

Various NPCs scattered around Iliasport tell me this, although the item seems to be called Neptune's Bell this time.  Hmm.  Is this a mistranslation or is TTR being tricky and deliberately mixing up the Roman and Greek names for the same(ish) god?

There's also various helpful bits of advice for dealing with earth-magic-loving kitsunes, which implies our near future contains foxes and fluffy tails.

There's another tutorial area.  This time it appears to be some kind of university with three floors of doctors and scholars.

One of the doctors asks for Enrikan medicine, which I conveniently have.  This is one of the downsides to following external walkthroughs.  I'm guessing this was supposed to be the origin of a quest chain that led back to Enrika and then the beach.  In effect I've managed to do it in wrong order.

Assuming it was some kind of quest.  I might have missed it, but I don't think I picked up any reward for turning in the medicine.

Oh well, tis the life of a hero.

The blonde in the examination room beyond the doctor turns out to be the extremely naughty Nurse Nightingale. 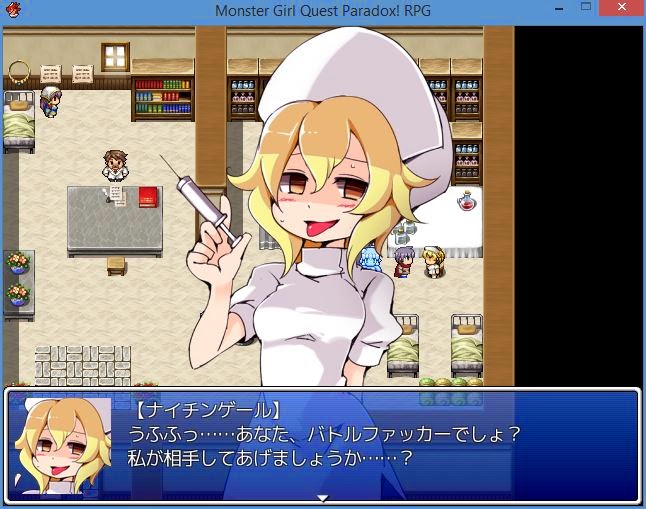 She's another battle-fucker and has a wide variety of different techniques, but – alas – no different artwork.

She's not the only battle-fucker in the building either.  The professor on the top floor is another sexual gladiator.  She's in a rush and quickly coerces Luka into doing a Clinton on her dress. 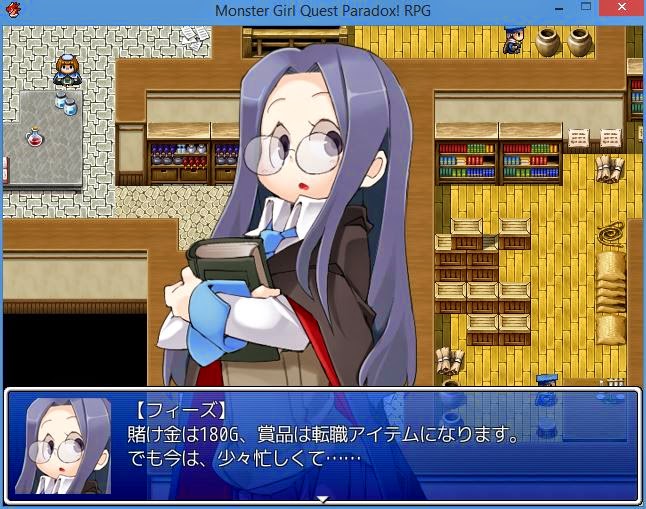 I should really remember to remove the Desperate Training ability before sending Luka in for these battle fucks.  Anyone would think I was deliberately setting the poor lad up to lose.

On the other half of the top floor there's a library and the guy at the end of it gives you a flame thrower and some kind of electric spark spitter type thing.  If I'd gotten around to levelling up Engineer I might have some clue what these things did.  Hiding in a pot is also an anti-earth-magic pendant.  I feel the game might be giving me hints about the next dungeon.

The hints continue with the blacksmith, who just so happens to specialise in synthesising earth stones with armour.

The accessory store is interesting.  It contains a lot of items that alter both Job and normal XP gain.  Most seem to duplicate the Human race abilities, although there are a few different ones that do things like gain 150% XP at the cost of taking double damage from pleasure attacks.  I still don't know whether it's better to focus on Job XP or normal XP.  My back line is normally one character levelling up a job with Hard Job Wrist and the other three gaining double XP off Bondage Rope.

Next it's time to advance the story (otherwise it's a rather empty Treasure Cave with a locked, impassable door).

The next trigger is to talk to the sailor on the second pier.  You'll know which one as Ilias will be standing next to him with a party that now includes a dog girl. 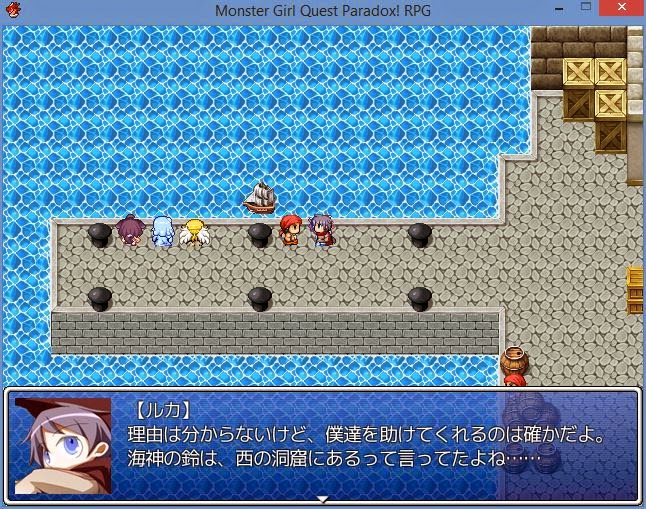 The sailor tells us he can't go anywhere because of the storms.  Then mysterious Nero shows up and tells the party about the treasure cave to the west.

Again this is similar to the original MGQ story.  Any ships trying to go north are sunk by Alma Elma's (the succubus heavenly knight) storms so Luka needs to find Poseidon/Neptune's bell to render a ship unsinkable.  Alice is in more desperate circumstances, but the story is essentially the same.

Okay, tomorrow um, Thursday next week we pay a visit to the Treasure Cave.
Posted by M.E. Hydra at 11:00