Looking to Commission a Cover Artist for the Sandwiched by Series

Ah, the Sandwiched by series.  Originally it was supposed to be a series of 5-10K word novellas, wholly self-published by me, released monthly over the period of a year.  While the stories are only connected thematically (monster girl threesomes), I intended it to be a trial for later serials that did tell an ongoing story over the period of a year (Okasare Kenny).  Provided I could prove I had the discipline to keep to a monthly schedule (because I didn't want to launch into a proper continuous story and have it go AWOL after a couple of months).

So much so, I think it's time for a relaunch and a Sandwiched by series that does adhere to the original vision.  I'm even making it easier for myself as the first 5 are already written (as well as chunks of 6 and 7).  So let's try and keep to a schedule this time so 2019 can be about the gorgeous, freaky, sexy weirdness of Okasare Kenny.

In keeping with the concept of relaunch, I think it's time I did a little more with the cover art.  I think the basic design is fine.  The monster girl silhouettes... less so.  Here are the originals for reference: 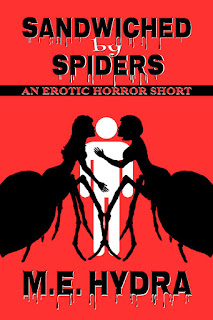 Was I trying to draw a spider or an ant here? 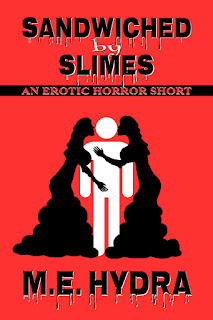 Originally, to contrast with the other silhouettes, I wanted the slimes to be blue and transparent.  I had nowhere near the art chops to make that a reality. 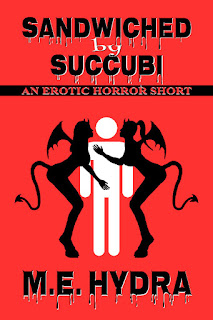 This one didn't turn out too bad. 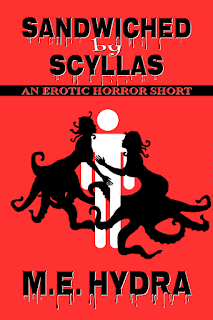 Panic, panic, deadline approaching.  Stock art assets to the rescue...  To be fair, I didn't really give my brother (who's done most of my other covers and helped out with this one) much time to pull this one out of the bag. 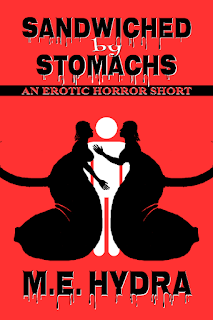 Deadline panic again.  Less said the better.  As with the slime girls, I wanted to contrast these with the other silhouettes by making them flesh coloured.

I'm willing to offer $40 per cover and there will likely be 12-13 pieces in total, meaning the overall commission will be worth around $500 if I like what I see.

Yes, I know this figure is more in the range of commissioning fan art than commercial artwork.  It's pretty much what I can afford and justify with current sales at this present point in time.  If I really like someone's work I might be pushed higher and of course, if sales increase I will have more money available for future projects.

There is a little bit of time pressure as I want to re-release Spiders around the 13th of January and would ideally need the artwork for that by the 10th.  Yup, it's short notice, but I'm hoping that as they're silhouettes, the pieces should be fairly quick and relatively easy to create.

Also, if anyone has suggestions for other places I can post this request without feeling like a human spambot (DeviantArt maybe?), please let me know.